The designer came up with jackets with the legendary Novosibirsk snowdrifts. In the picture, a jacket designed by Anna Golub is superimposed on a background that has become a print.

Novosibirsk designer Anna Golub came up with jackets with famous city snowdrifts: she called the Sugrob Island collection. According to her version, you can live in a dirty city by mimicking.

Anna Golub, art director, designer and co-founder of Prism Creative Studio, told the NGS journalist that the idea of ​​such prints appeared a long time ago:

– As a resident of Novosibirsk, I observe such landscapes all my conscious age. Now we got around to making a concept to show that you can even be inspired by dirt. And in general, there is no good or bad source of inspiration. You either simply carry what you see through yourself and broadcast it in your vision, or you don’t.

According to her, Russian reality rarely becomes an object of inspiration. Anna wanted to change this, because other artists, designers are able to be inspired by their surroundings.

– I think it’s honest and sincere. And it is true. Do not invent someone else’s reality. I would like to wear such prints as jackets or overalls, because the things that are sold are not designed for dirty reality. They are designed for dry European weather. With us, it’s the opposite, so those things that we wear are either fashionable and feel sorry for them, or they are just the same and we have to wear something simply because we wait out the slush, – Anna Golub is sure. 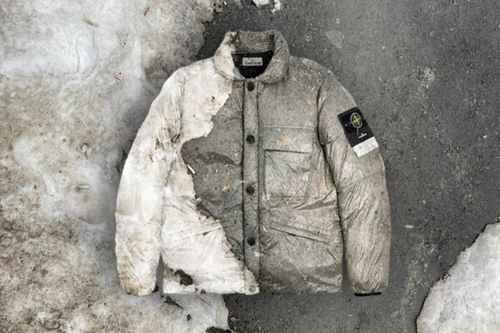 So far, this is an artistic concept that does not have a customer, but the designer plans to write to one brand to collaborate and create a collection of prints for a complex urban environment. Anna believes that it is logical to make such a collection for the Siberian off-season, when the weather can change several times a day:

“The idea is to make clothes both conceptual and practical. There is such a trend in the fashion industry – tech wear: fabrics are thought out taking into account the peculiarities and characteristics of the environment for which the clothes are intended. I see such jackets in just such a context: a water-repellent surface, good ventilation for temperature fluctuations in the weather from -5 to +10.

Many Novosibirsk citizens, having seen this collection, write to Anna on Instagram that they wanted a designer jacket.

Earlier we wrote that the Novosibirsk company has released T-shirts with burning taiga. This happened in 2019 during forest fires in the Krasnoyarsk Territory. Then it was reported that 20% of the sales will go to the restoration of the Siberian taiga – to the EKA fund, which will plant new trees in the burnt-out zone.

Sharp impressions of a Siberian who parted with myopia -25