In Novosibirsk, on Trubnikov Square, one driver beat another with a sapper shovel. The conflict began due to the fact that one driver wanted to drive along the road, and the second did not want to miss

In Novosibirsk, the police are investigating a scuffle between two drivers, who in the evening on Trubnikov Square threw themselves into each other from gas canisters. Then one struck the other with a sapper shovel.

According to the police, both drivers submitted applications. One of the participants in the conflict told the NGS his version.

– I went down from Narymskaya to Trubnikov Square at a green traffic light. Between Zheleznodorozhnaya and Narymskaya, the first row of cars stood at a red traffic light. According to the unspoken rule of drivers, those who enter the ring and want to get into the extreme lane are allowed through one. I have been traveling there for 15 years, I myself constantly missed. When I entered the ring, I got into the second row, the first was already standing. Following me, the cars formed the next one. The green signal from Zheleznodorozhnaya Street just lit up, and the cars went to the ring. The second row started trying to get into the first one. And there was a stubborn driver who did not want to miss, – Igor explained.

A tail of cars formed behind Igor’s car. The driver got out of the car in front of him and headed towards Igor.

– He opened the left door (I have the right steering wheel in my car), started shouting that I was pinching him. I tried to explain that I stopped at a green traffic light and all normal drivers pass through one, – the victim recalls. – He seemed to realize, but freaked out something, looked at my door, maybe he wanted to break it down. He left it open, although heavy traffic began, cars began to honk. He walked around my car, pounded on the driver’s side mirror. This behavior could not but outrage. I went out to talk to him, he was already walking to his car. He turned sharply and burst out with a gas canister. “Here, get it,” he says. 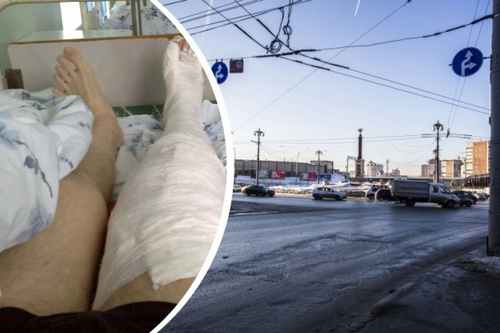 Igor managed to dodge, as the can was a spray, so he was almost not touched. Then he took out his spray bottle and also sprinkled gas in the face of his opponent.

– He roared, ran to the trunk of his car, began to dig there. I took out a sapper shovel, started waving, and I threw out the rest of the gas. He became furious, began to cut on the legs specifically. I fell. He went wild. Did you feel the blood? I do not understand. People started shouting to him from the cars: “What are you doing?” I began to defend myself with my hand, he began to aim at the head. My fingers broke. The men just jumped up, they see that he will not stop. They grabbed him, threw him onto a snow plow, grabbed a shovel, – said Igor.

After that, the drivers carried Igor into the trunk of his car so that he would not have to lie in the snow. An ambulance and the police were called to the scene.

In the hospital, Igor was diagnosed with an open comminuted fracture of the phalanges of two fingers, a dislocated finger, an open fracture of the right leg. The man also received lacerated and bruised wounds in the leg and hand, eye burns (an extract from the map is at the disposal of the editorial office).

The press service of the Main Directorate of the Ministry of Internal Affairs of Russia for the Novosibirsk Region confirmed that a conflict between two men took place in the Zheleznodorozhny District, which escalated into a fight. Both participants wrote statements.

– Police officers are conducting a check on the fact of a conflict between men. Both were interviewed, statements were accepted from them. Participants undergo treatment, after which they will be issued a referral for a forensic medical examination. After that, the severity of the harm to health will be established and a decision will be made, ”the department told the NHS.

Earlier this year, a driver brawl broke out in Truda Square. The conflict erupted on a busy road – it was caught on video. Mom don’t worry, I got hit by a car