A strange situation is developing around the Novosibirsk PJSC Tyazhstankogidropress: at the end of March, workers were dismissed to their homes for several days due to a power outage. Some have been warned that “the plant will close on May 25 and you will be laid off.”

The general director, as it turned out, quit a few weeks ago, he was replaced by the founder of the company for the purchase and sale of scrap ferrous and non-ferrous metals (the company was created last fall).

The workers are worried that the plant is really closing, and the new CEO and the company he founded have appeared for the further sale of Tyazhstankogidropress’ property. NGS journalist Ilya Kalinin spoke with ordinary employees and managers, who admitted that “optimistic and pessimistic scenarios are being considered” for the future plant.

– On March 31, at lunchtime, the electricity was cut off, and the authorities said: go to rest, there will be no work on Thursday either … And on April 1 they called and said that they would not be there on Friday, they say, go for a walk until Monday. Officially, they also said this: whoever went on vacation was informed that on May 25 the plant would be closed and you would be laid off. I have a vacation in April, I am also looking forward to such a message, ”said Yury Nedzelyuk, an electric welder of workshop No. 6, to the NGS. – In general, they said that the paper has been prepared for the entire plant and the reduction will definitely be on the 25th. Until that time, we must complete our main order for Leningrad. Now all the forces have been thrown there.

The same information was confirmed by another worker who recently went on vacation.

– I asked: until what date will we work? I was told that until May 25th. And then – the reduction, – said an employee of Tyazhstankogidropress, who asked not to be named.

An NGS correspondent with a request to comment on the situation turned to Alexander Zhuravlev – the manager came to the plant in early November 2020 as Deputy General Director Anatoly Oleinikov, but later replaced him in this post. But, as it turned out, Zhuravlev has not been working at the plant since March 1, 2021.

– The reason for the dismissal is precisely that it is impossible to do anything and … I will not comment. I left of my own accord. While I was the head of the enterprise, there were no layoffs. I accepted several orders for execution, I was finishing them, and it was impossible to fire people. Yes, and there was no desire to fire, – Alexander Zhuravlev briefly explained. 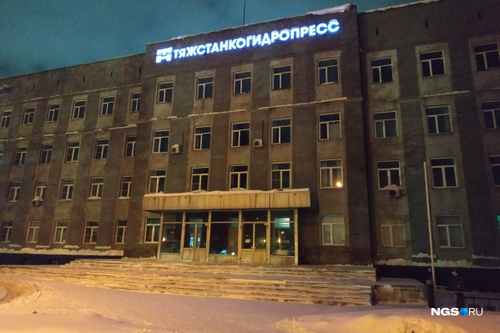 Recall that in November 2020, Alexander Zhuravlev, while still in the position of deputy general director, told the NGS that the volume of orders attracted to the enterprise does not allow the entire staff to be supported. Then he announced that at the beginning of 2021, about a quarter of the workers would be laid off at the plant. At the same time, Zhuravlev said that there are no debts at the PJSC for electricity or a loan, and he shifted responsibility for the unhealthy financial atmosphere at the enterprise to his predecessor, Anatoly Oleinikov.

A little later, in December 2020, Alexander Zhuravlev, already in the position of CEO, told the NGS that earlier he did not express himself quite correctly about debts: there are debts, but only to the tax authorities. At the same time, Oleinikov told the NGS correspondent that during his leadership period from spring to autumn 2020, the plant paid off all its large debts.

The allegedly impending sale of the enterprise for debts – such conversations were constantly voiced by ordinary workers – both Oleinikov and Zhuravlev completely denied. Zhuravlev told the NGS that he was appointed head of the enterprise to reanimate production. Tyazhstankogidropress received orders from both large state-owned companies, such as Russian Railways and Rosatom, and from abroad.

New CEO and two scenarios for the future of the plant

Since March 2021, PJSC Tyazhstankogidropress has been headed by Amir Miftakhov.

According to Kontur.Fokus, Amir Miftakhov is a member and manager of several companies that are currently closed. On the Internet, you can find the saved page of the site of OJSC “Association” Vtorchermet “” with a list of affiliated persons for April 2013, where Miftakhov is designated as a member of the board of directors of this joint-stock company. In December 2013, Vtorchermet as a legal entity changed its form and became an LLC. Whether Miftakhov refers to him now is unknown, but in November 2020 he became the founder of the Unit-N company for the purchase and sale of ferrous and non-ferrous metal scrap. Amir Miftakhov owns 50% of the new company.

In a conversation with an NGS correspondent, Amir Miftakhov did not deny that he was one of the founders of the Unit-N company, but denied the assumption that the company was created to sell the plant’s property.

– These two facts are not linked in any way. Frankly speaking, I declare to everyone: we are obliged to keep the profile of the enterprise, and while I am the CEO, I will not allow the equipment to be cut into scrap metal. As for the industrial waste that is generated on the territory, yes, I reserve the right to hand it over [for scrap], as it is provided for by the current federal legislation, ”said Amir Miftakhov, general director of Tyazhstankogidropress PJSC.

He confirmed that the workers were dismissed to their homes because of the electricity cut off for debts. Debts to power engineers, according to Amir Miftakhov, have accumulated under the previous leadership. True, in what volume and for what period they accumulated – during the leadership of Zhuravlev or Oleinikov, the new CEO could not explain.

– For the previous period – absolutely sure. I don’t know for whose period. Maybe the previous director had accumulated it, maybe it was a carryover balance – I don’t know, ”Amir Miftakhov replied evasively.

Regarding the announcement to the workers of the reduction date on May 25, the new general director of Tyazhstankogidropress explained that two scenarios are being considered: optimistic and pessimistic.

– If we fail to normalize the situation with energy supply, heating, orders, payment of collection (because the tax arrears are colossal), then in this situation we will have to stop working. If we manage to somehow normalize this situation, then people stay at our work and calmly go about their activities, – emphasized Amir Miftakhov.

In mid-December 2020, the NGS told how workers at Tyazhstankogidropress received wages ranging from 7 to 50 rubles. Around the same time, the prosecutor’s office opened an administrative case against the management of the PJSC for violation of labor laws. Some workers have not seen their wages since December until now, electric welder Yury Nedzelyuk told the NGS correspondent. He himself, Nedzeluk specified, has not received full payments since the beginning of 2021.

Recently, the workers of the plant hoped that the industrial enterprise would be saved, and even wrote letters to Vladimir Putin and the government of the Novosibirsk region.