Doctors advise checking for antibodies 3-4 weeks after illness or vaccination. Since the beginning of the pandemic, a large number of people have in one way or another encountered the coronavirus, so tests for antibodies to it are becoming more and more relevant: some want to make sure that they were vaccinated for a reason, others – to check if they were asymptomatic.

However, it can be difficult to understand what exactly the test showed without a doctor. We figured out how to correctly read the test results and what numbers indicate that you have immunity.

First, let’s figure out what antibodies are. They are also called immunoglobulins, and they can be of different classes – A, M, G. IgA are those antibodies that are able to go to the mucous membranes, such “border guards”. IgM – acute antibodies, they appear on the third or fourth day and mean that a person is infected with a coronavirus. If the PCR smear is negative, then most likely this is a false negative result. Therefore, the smear must be retaken.

Interpretation of test results: antibodies appear even in the acute phase of infection

The memo, which the Moscow City Health Department issued for those wishing to take antibody tests, says that a small amount of IgM can be read as a “dubious” result. If IgM is from one to two, and IgG is less than ten, then this indicates that the virus can be in the body and the patient is asymptomatic.

– This disease has not yet been fully understood, therefore, as a preventive measure, we ask you to reduce contact with loved ones within 7 days. After a week, donate blood from the vein again. If you feel unwell, immediately call the doctor at home, says the memo.

If the IgM value is two or more, and the IgG is still less than ten, this indicates that the patient is in the disease stage right now. If the test gives such a result, you do not need to contact others. Even if you feel good, you can still infect them. Self-isolate and call a doctor.

– Over time, the cells that produce antibodies are rearranged and produce more highly specific antibodies: if they grab, they grab. Such an antibody is more attuned and therefore more potent. These are G class immunoglobulins. They appear on the tenth day, ”says physician Ivan Skorokhodov.

When more than ten IgGs are detected in the blood, and less than two IgMs, this indicates that the patient has recovered, and most importantly, he has developed immunity to SARS-CoV-2. However, you still need to follow all the precautions taken, like wearing a mask and washing your hands regularly – we still don’t know everything about the virus. In addition, the test can lie, especially if the rules for preparing for the test were not followed.

“Like any test, an antibody test has an inaccuracy and can be false-positive or false-negative if certain preanalytical conditions are not met,” says Elena Dushina, head of the New Hospital Center for Immunoprophylaxis. – For example, a person took some kind of medicine, smoked or ate just before taking the test.

Immunity to COVID-19 is determined by the amount of IgG 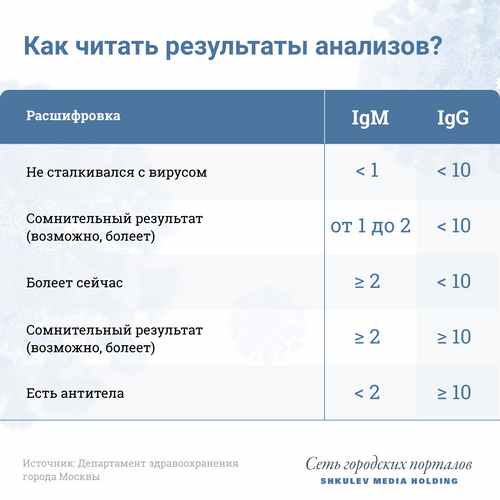 According to Elena Dushina, if antibodies were formed not after an illness, but as a result of vaccination, the test results may also depend on which vaccine you were vaccinated with. Now in Russia there are three of them: mass vaccination is carried out by Sputnik V, EpiVacCorona entered civil circulation, the latter was registered by KoviVac, but it is not yet widely used.

– Each vaccine currently in use generates its own kind of antibodies. Antibodies, which are more similar to those obtained as a result of the disease, are formed during the Sputnik V vaccination, says Elena Dushina. – The EpiVacCorona vaccine forms antibodies to the most significant fragments of the virus attachment protein S. They are somewhat different from antibodies to whole protein, so a specific test system is required to detect them. COVID-19 vaccine developed for cats: how it will affect humans