A developer from Novosibirsk told why emergency houses are not being demolished in Russia. On the territories of emergency housing, garages and private houses are often found, but according to the law, they cannot be included in the resettlement site.

There is not a single district in Novosibirsk without dilapidated houses: even in the quiet center, the seemingly most prestigious and expensive place to live, there are still dilapidated houses that are under a hundred years old. What can we say about the outskirts, where such housing still prevails. Some plots are gradually being settled, new buildings are growing in their place. But the dilapidated housing is decaying and falling apart faster than the authorities find investors for its resettlement.

Why is this happening, how many houses in Novosibirsk are actually damaged, and why it is impossible to get rid of them according to the Moscow example, Igor Belokobylsky, General Director of the Strizhi Group of Companies, explains.

According to our estimates, there are approximately 1,300 emergency houses in Novosibirsk. Of these, only 350 were officially recognized as emergency, and only 170 houses were included in the resettlement program. Why did it happen? The municipality, as soon as it recognizes the houses as emergency, immediately falls into a mandatory position – it is obliged to resettle them. Therefore, municipalities are trying to the last not to recognize the houses as emergency. They submit this incorrect statistics to the top, statistics go to the federal level, where they read it and draw federal programs based on this distorted indicator, which differs 10 times. It’s a vicious circle.

But now at the federal level they have stopped playing with spillikins and require a solution to the problem. The President unambiguously set the task of building a billion square meters by 2030, and the most serious resource for the implementation of this program, both in terms of land plots and in terms of urban planning, is renovation, which in Novosibirsk, for example, is primarily possible due to emergency housing. 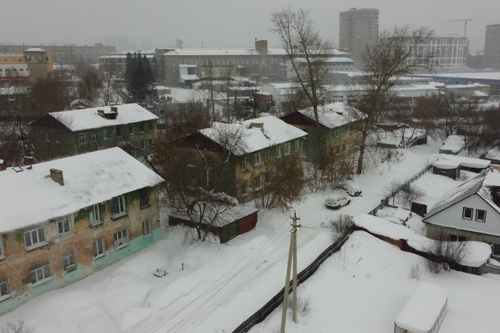 But in the federal government, in the State Duma, no one can imagine the extent of the disaster — and this is no longer a redevelopment, this is precisely a disaster — we need an inventory of houses over 50 years old. The municipality will be punished if it provides truthful information, so the Federation, at its own expense, must conduct an inventory and conduct it regularly in order to determine the sources of funding. We are talking about trillions of rubles for the whole of Russia.

Naturally, one of the sources is an increase in market attractiveness at the expense of private investors. But it is very common, and not only in Novosibirsk, the situation when a private house and, for example, a couple of garages appear in a group of emergency apartment buildings. Approximately 80% of dilapidated housing is in this condition. Until a mechanism for buying out private houses at a fair price is determined, falling into sites that are systematically built up with dilapidated houses, this problem will not be of interest to investors in our country. And having become interesting to investors, it can seriously move the issues of financing off the ground.

The laws for working with emergency apartment buildings in Russia are well developed: there are procedures for agreeing and determining the price, if you follow them, everyone can agree. If people and developers cannot agree, a court-appointed examination comes into play, which assesses housing adequately enough.

Today, emergency multi-apartment housing in Novosibirsk is worth about 50 billion rubles, the city budget has no trace of this money. The increased interest of developers in financing these sites could raise quite serious money.

Everyone equals redevelopment and renovation, but Moscow renovation is a different planet. Moscow-style renovation works with full-fledged housing, which, perhaps, is a little outdated. It’s like changing shoes before the new season: they just change the face of the city through the demolition of housing, which already looks somehow not very good. And we have emergency housing in which you cannot live physically.

Moreover, we have emergency housing, which is not recognized as such. Do you feel the difference: demolish an ordinary five-story building and relocate a house in which the ceiling falls? At the federal level, they are trying to create uniform rules of the game, bashfully avoiding regional problems. They don’t seem to exist for them.

On December 30, 2020, a law on the integrated development of territories was adopted, but in fact it does not work yet. Last year, 4 sites with emergency houses were played in Novosibirsk, and they will be launched. Several such auctions were also planned this year, but under the new legislation, it is unlikely that anything will happen in the coming year, until the decryption of the law and changes in it and in the codes appear.

We conducted a survey of NGS readers and found that 65% of our audience believes that it is necessary to replace the private sector in the center and along the metro line with apartment buildings. Another 22% are sure that there will be a place in the city for high-rise buildings and private houses. 7% of readers live in the private sector in the center or near the metro and are against resettlement, and another 6% of such Novosibirsk residents are ready to exchange their house for an apartment in a good high-rise, but in the same area.

Earlier in March, a Novosibirsk civil servant in a column on the NGS talked about why the metro is not developing in the city and whether the city needs it at all. Archaeologist told what sex was like 14 thousand years ago