Some Novosibirsk residents accumulate so many points that sometimes they pay for their purchases in full. Novosibirets arranged a showdown due to the loss of 623 points on the “Lenta” card

Scammers come up with all kinds of ways to steal money from plastic cards; now, even the accumulated points have begun to disappear from Lenta’s bonus cards. A resident of Novosibirsk Fyodor Deryabin faced such a situation – all the points that he had accumulated over several months disappeared from his card.

When the man began to understand, he found out that they were written off for someone else’s purchase. How it happened – in more detail in the material of the NGS.

If you have a Lenta loyal customer card, you can save up points for it for purchases made, and then calculate on the basis of the ratio of 1 point to 1 ruble. At the checkout, you show for scanning either a physical card or a barcode from the Ribbon application, in which you enter a virtual card. At the beginning of March, NGS reader Fyodor Deryabin discovered that all points had disappeared from the account in the application. The amount is small, but unpleasant, and “it’s a matter of principle.” But the points could have been more, 3,000 or 5,000 rubles.

– I saved up these 623 points for two months. With the question of where they disappeared, I turned to the first “Ribbon” I came across, and they tell me that the purchase was made and the bonuses were written off. But I was not calculated by points. Then, in the attachment, I saw that the very purchase was made in a supermarket on Dusi Kovalchuk Street, and I never go to that side of the city at all, ”says the buyer. 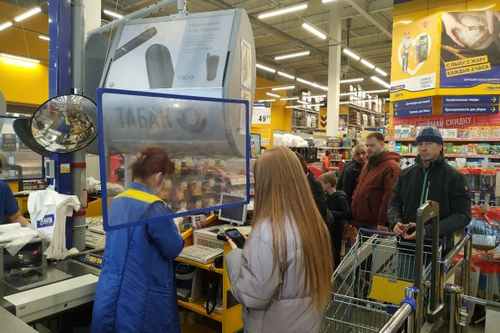 It turned out that on March 2 at 22.54 in the “Lenta” on Dusi Kovalchuk, 91, someone partially paid with these points. I bought a Ritter Sport chocolate bar, a broiler chicken carcass, a doctor’s sausage, bananas, and seafood cream paste. I paid with points – 623 rubles, and partly in money, 313 rubles. Fyodor Deryabin went to this store, watched the video from surveillance cameras and found out that the purchase was made by a man.

As representatives of “Lenta” explain it

– They said that it was a guy who did not look like you. Literally from the end of February, these bonuses cannot be easily written off, you need to click on a button in the application, the barcode appears, and only then can you write off. And this guy showed the application, clicked everything there, wrote everything off – how it happened is not clear. By calling the hotline, it was recommended to delete the application, and in a day to reinstall it to the same number. They promised that the bonuses will return in 10 days. I say, what, bonuses disappear, are there any cases? They say that there is, well, not often, but the bonuses disappear, someone writes off, someone steals, in short, the client explains.

On the website “Lenta” in the section “Rules for the use of bonus points” it is written: “The company is not responsible for the use of points in case of unauthorized use of the card by third parties.” But Fyodor Deryabin was promised to figure it out and, if possible, return the points.

– They said that the solution to the issue was entrusted to the store where the bonuses were written off. It took 10 days, no result, they promised to contact me. Bonuses did not appear in the application, and no one called me, – the buyer complains.

In response to an official request from the NGS, Lenta replied that an error had occurred, and everything that had been accumulated would be returned.

– Customer points were deducted by mistake as a result of a technical failure. The points written off will be credited to the client’s account within 24 hours. In addition, the Lenta company, as an apology, will award bonus points so that the card balance is 700 bonus rubles, ”says Timofey Goncharuk, PR manager of the Lenta company’s PR and government agency.

To be on the safe side, the retail chain recommends that buyers keep their card away from prying eyes, periodically check their account and, in which case, immediately file a complaint.

– The company is conducting an internal investigation of the incident. Buyers who have issued a loyalty card number 1 “Lenta” are advised not to transfer data with the image of the barcode of the loyalty card to anyone other than company employees when paying for goods or at the information desk, – emphasize in “Lenta”.

PS During the preparation of the material, it turned out that the points were returned to the buyer. But the next day they were again stolen – someone again paid for the purchase in “Lenta” at 206 Boris Bogatkov Street. Red torch showed a performance-stream about a tired woman Luda