The dispute between those who buy apartments in Khrushchevka near the metro and those who leave for new sleeping areas has been going on for many years and is unlikely to ever end. Novosibirsk residents have already shared their views on why it is better to live in a townhouse, in a distant “sleeping bag” or in a good old “crumbling”.

NGS reader Ekaterina Veshkurtseva has changed several apartments in the Plyushchinsky residential area for 15 years, and now she wants to bring her mother here too. Why life here is no worse than life in other parts of the city – the Siberian woman argues in her author’s column.

I have been living at Plyushchinsky since 2006, in fact, our family is old-timers. We have changed several apartments here. At first they lived on Vysotsky Street in a “one-room” apartment, then they bought a “two-room apartment” right there. Now we are moving to a three-room apartment on Vitaly Potylitsyn, we are planning to move here, to Plyushchinsky, and mother from the center – we are considering the option of buying a one-room apartment in our microdistrict so that everyone is nearby.

We were always satisfied with the layouts of the local apartments – they are spacious and comfortable, square rooms, large hallways – and the price (you can’t buy anything in the city for that kind of money). Yes, apartments are rented without renovation, but my husband and I do everything ourselves – we buy only materials. 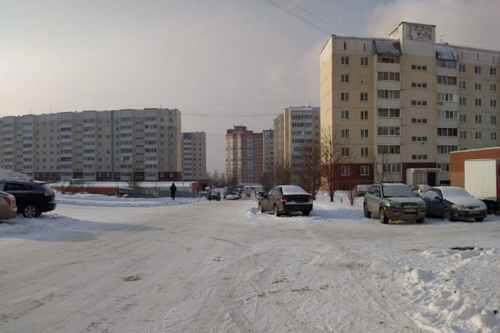 Here, the ratio of price and comfort is the most optimal for us. It was always warm in the apartments in winter, in the courtyards there were equipped playgrounds, volleyball and football fences, eco-covering of playgrounds – they appear more and more every year. There is a lot of parking space, after snowfalls the snow is cleaned to asphalt and taken out of the residential area. In the house where we lived on Vysotsky Street and where we now live, the trees have already grown, there is a lot of greenery. Recently, a new house was commissioned next to us, and the pines have already been planted, the yard does not look empty or clogged with cars. In this regard, as a resident, I have no questions to the residential area.

Now the price for the secondary housing has grown significantly, so this is understandable, because the microdistrict is being improved more and more, houses are settling in and living here is no worse than in other similar housing estates. From Vysotsky Street to the center, it takes only 15–20 minutes by car, at rush hours I get about an hour by bus to the State Public Library for Science and Technology.

I do not understand the hysteria that is now happening about our neighborhood. Why is it called the “ghetto”? I believe that this word is used by people who do not live here and have never been here. If you look at what this word means, it’s part of a big city for minority populations, and I, for example, don’t count myself among them. We have an ordinary big family. We are the same residents of Novosibirsk, like everyone else who lives in the center or in other micro-districts. And I lived in the center, on Kropotkin Street, where there is an eternal problem with parking, snow removal, playgrounds across the yard, or maybe two. Housing is much more expensive, there is less planning.

For this money – only Khrushchev buildings with a kitchen of five square meters. And it’s not a fact that children will go to a good school. And now we have a wonderful school – spacious, equipped to the best standards. Children attend clubs free of charge, including robotics (we pay only a thousand rubles for it). Yes, we took our children to kindergarten at the MZhK for a long time, but now we have already built several buildings of modern kindergartens, in which we have already stood in line with the youngest child.

What happened during the fire, of course, is slovenliness and, above all, on the part of the district administration, I think. Who and when issued a permit for the construction of these stalls? Who oversees the fire safety of these kiosks? There is a residential building in the immediate vicinity. Because of them, it is impossible to widen the road on which the main load falls. It is not clear why the firefighters completely blocked the roadway in the morning and so for a long time.

It was a collapse! Was it really impossible to extinguish the fire using one lane? And where is the consistency of the work of special services? Why did the special equipment for cleaning the ice, which arose after extinguishing the fire, arrived only a few hours later? Why did no one think about people in this situation? Children in terrible weather (minus 25 with the wind) walked to schools, kindergartens, people abandoned their cars and walked to the tram on the Gusinobrodskoe highway. Why was the road blocked for almost 12 hours and no one was in a hurry? They were still extinguished at 9 in the morning, and the traffic was opened at almost 4 in the evening.

Regarding the road, the anger of people is absolutely correct, the district administration should be the first to constantly raise this issue about leaving the microdistrict, and not agree on the placement of stalls along the road, which can be expanded.

We got used to going out for houses – from there, there is a normal passage to the Comintern and further to the Dzerzhinsky district. But this road does not solve all issues during rush hours, because you have to leave for the courtyards. It is clear that at least a few more roads are needed for people to live comfortably. Yes, at least one that would connect the Plyushchinsky microdistrict with Kirov Street, because this is an alternative exit. And the authorities should be responsible for this first of all, and not the developer, and even more so not the residents, who are accused of allegedly not needing to live here. We ourselves will somehow figure out where we live.