The NGS tested the ski resort on Lake Teletskoye. Unfortunately, it was not possible to photograph the same kind of magazine because of heavy fog during the trip, but on clear days you will definitely enjoy it.

Continuing the series of materials about winter recreation sites, the observer of the NGS Stas Sokolov drove to Lake Teletskoye. The local ski complex cannot yet compete in popularity with Sheregesh or even the Manzherok resort, but it has a number of advantages.

And since you have come so far, then you should not limit yourself only to skiing from the mountain with the ridiculous name of Kokuya – this unique natural area promises many more interesting things.

How to get there and where to live

The Teletsky ski complex is located in a gorge on the slope of Mount Kokuya, the nearest settlement, the village of Artybash, is more than 6 kilometers away. In addition to a small hotel, there is no housing around at all, and the road itself, leading from the village, ends here. So you will not meet anyone here except skiers and employees of the ski complex.

In “Teletsky” itself there are huge rooms (you cannot see such rooms in any 5-star hotel), behind the windows of which the mighty spruces, covered with snow, rise. One bathroom is large enough to accommodate a couple of economy class rooms in some popular tourist city. The prices here, however, are also five-star – even on weekdays there is nothing cheaper than 11 thousand rubles a day. Those who are not ready for such expenses can choose from a fairly large number of hotels, bases and guest houses in Artybash. Here you can find numbers cheaper than 2 thousand rubles. There is a bus from the village 2 times a day (morning and evening). But if you are on wheels, then the car can be parked in the ski resort itself.

How much does the rental cost

Lifts in Teletskoye are simple – chairlifts. The main one, on which you can climb to the top with a transfer, is located 30 meters from the hotel. But you can start the descent literally by leaving the doors of the building – one of the trails passes by, leading to another (drag) lift located just below the slope. By the way, there is also a tubing for children (for descending on “cheesecakes”) and a small children’s lift. 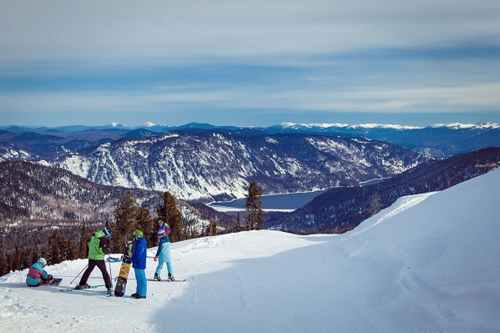 A two-hour lift pass will cost 500 rubles on weekdays and 600 rubles on weekends, the whole day costs 1000 and 1400 rubles, respectively. A set of equipment can be borrowed for a day at 700 rudders (at the weekend for 800), and a special set for freeride will cost 1200 rubles. Children’s kits are about half the price.

Despite the fact that the complex makes an outwardly rather modest impression, a total of 7 tracks of different levels and lengths have been laid here. The five-kilometer “Promenade” will be subdued without any problems even to a teapot – the height difference here is 755 meters. But there are also quite serious “Duga” (1700 by 440 meters) and “Mane” (1600 by 440 meters).

But the main feature of “Teletsky” is the unique opportunities for freeriding. There is always plenty of snow here – the proximity of the lake provides increased humidity, and the gorges protect from the wind. One of the improvised “trails” (if, of course, you can talk about some trails in the case of freeriding) runs right under the lift. True, the administration categorically does not recommend skating there. But can you really hold off freeriders?

Another undoubted advantage of the Teletsky slopes can be considered the views themselves around. These are very close slopes overgrown with fir trees and, of course, the lake itself. However, this option is not always available. The weather on Teletskoye is changeable. You can leave the hotel in fine weather and end your walk in a thick cloud, through which you can barely see the next lift chair. This, however, has its own charm, especially if you are a lover of the atmosphere of horror films.

You can eat at Teletskiy in the spacious dining room on the first floor of the hotel or in a cafe called MCC right there, 10 meters from the hotel. Why is it needed there, to be honest, it is not very clear – during the day I have never seen at least 10% of the tables in the dining room occupied. The food is simple, but there are some local specialties like maral dumplings. Higher on the slope, next to the end of the first lift, there is a cafe “Orbital Station”, and already at the very top – another huge dining room for two halls with photo wallpapers depicting space and asteroids on the ceiling. The prices are heavenly – for 300 rubles you can just have a hearty snack, and for 600-700 rubles you can sit with a glass of wine.

“Teletsky” will appeal to skiers who are determined to spend the whole day on the mountain. In the evening, you can only go to the local spa center with antler baths, phyto barrel, Russian bath, massage and other leisurely entertainment. Even the cafe closes after dinner.

It is quite far to drive to Lake Teletskoye – it is more than 600 kilometers from Novosibirsk. So, having climbed into such a distance, it would be an unforgivable mistake to limit yourself to the slopes of Kokuya alone. You can, of course, take a walk in Artybash itself, where the Biya River flows out of Teletskoye. But if you have the time and desire, you should climb a little further. In a little over two hours drive from Artybash, there is the village of Yaylyu – the only settlement on the territory of the local reserve. You can’t just come there, but you can agree on a visit in advance, guests are welcome here all the time.

The village is located in a picturesque place where the lake diverges in “arms” in three directions, reaching its maximum width. City dwellers can be amazed by the cows wandering around the village and breathe in the village aromas. The apple orchards planted back in the 30s of the last century are considered a local attraction. The apples grow here the most real, without any discounts for the harsh Siberian conditions. They are used to make cider and stronger apple wine.

If you have at least minimal diving experience, then you should negotiate with the unique center “Through the Looking Glass” to look at the not very rich (not the Red Sea, of course) underwater world of Teletsky. Due to the combination of local conditions, the lake practically does not freeze, but even when a strong ice crust appears near the coast, holes are made in the ice and still submerge.

On the way back, you can stop at a not obvious, but extremely interesting place – the Ortosh ethnopark. It is located in the forest on the banks of the Biya near the village of Kebezen. This is a non-permanent hotel (although there are several lodges there) – appointments must be made in advance. But it’s worth it.

There is no road to the park, that is, getting out of the car, you will have to walk for about 15 minutes along a narrow path in a snowy forest, which in itself is already a small adventure. The idea of ​​”Ortosh” is to acquaint the guests of the region with the traditional Altai culture. Here you will be told local legends, shown rituals and games, and treated with local drinks and food.

For immersion in culture, a real ail was built here – a traditional structure of the Altaians – with a hearth in the center and a hole in the roof for smoke evacuation. Here you can try to make tolkan yourself – barley grains, coarsely grated on a flat stone, are an essential ingredient in many Altai dishes. A real discovery can be khan-tea cooked on a fire, where, in addition to a whole set of herbs, there is milk, ghee and the very same tolkan, which finally turns the drink into a hearty dish.

“Teletskiy” is the most remote point in our series about places of winter recreation. It makes sense to go there immediately for a week, so as not only to ride, but also to look at the surroundings. For those who are not ready to spend the whole day on the road, we can recommend the Tanay complex located relatively close to Novosibirsk.