The Lenta chain is testing a new store format in Novosibirsk – the 365+ discounters. The first retail outlet with this name was opened in the Snegiri microdistrict.

NGS observer Stas Sokolov visited the new “poor market” and compared its prices both with the usual supermarket “Lenta” and with the neighboring “Auchan”. The results of this comparison have left conflicting impressions.

The first 365+ store was opened in Novosibirsk in the Snegiri microdistrict (7/1 Kurchatova). Before that, a supermarket of the Lenta chain operated here. As reported in the central office of “Lenta”, now only two stores are open under this name – the second is located in Barnaul. Both have a sales area of ​​approximately 375 square meters, the assortment includes 1,600 headings, 60% are the company’s own trademarks, 40% are local and federal brands demanded by local buyers.

– It is premature to talk about any results and plans. The project is in the pilot stage, the pilot results will be announced in the first half of 2021, – said Timofey Honcharuk, a company representative.

365 is one of Lenta’s own trademarks, under this brand goods are sold at the lowest price for the selected category. The chain also has its own brand “Lenta” for the middle price niche and a number of specialized brands (Bonvida, Lentel, etc.). 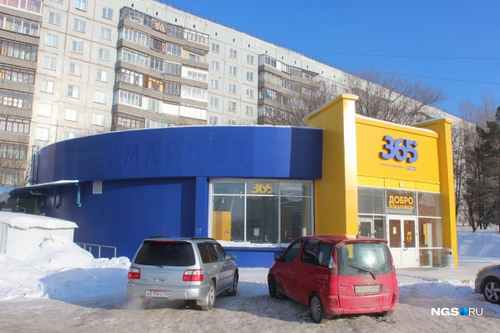 The choice of a remote area in a provincial city with a population of one million (and not in the capital) as a place for the experiment is not accidental – if the format shows itself well there, then it can be successful everywhere. And the store on Kurchatova also differs in the shape of the building. This is a round one-story pavilion, built in Soviet times, it stands out against the general background for its very appearance.

Nothing has changed visually in the decoration of the store after it ceased to be just a supermarket. Unless the choice of goods has decreased, in many categories, in addition to packaging with the 365 and Lenta logos, there are at most one or two brands. However, there were also few buyers during the day, the cashier, who is the only employee in the sales area, was clearly bored.

The store has a Lenta card and, just like in supermarkets and hypermarkets, the price tag contains two prices – with and without a card. We compared the 365+ prices with the regular Lenta supermarket and with the nearby Auchan City store. In theory, in both of these outlets the prices for products should be at least a little, but higher, otherwise the point of coming to “365+” disappears – the choice here is much poorer.

The results of this comparison were discouraging. Four out of 15 running positions (potatoes, sugar, Classic sausages and pollock) turned out to be more expensive in the new store than in Lenta itself. In four other products, the discounter advantage was minimal or absent altogether.

Comparison with “Auchan” turns out to be even more revealing. This is a large supermarket, where customers go not so much for the sake of savings, but because of the wider choice. But even in this store we managed to find cheaper tomatoes (125 rubles against 135 rubles in “365+”), pollock (135.5 against 168 rubles), rice (50 against 73 rubles). And for the rest of the selected positions, the price advantage of the “discounter” was minimal.

As it stands, the only thing that helps save 365+ is time. The store is noticeably smaller in itself, and choosing between three packs of butter is easier than between 10-15. It is not so much a discounter as a small “convenience store” where shoppers go for basic products simply because it is conveniently located. But the chosen room is clearly large for him. In the supermarket “Maria-Ra”, which occupies exactly the same premises and is located 180 meters up the street, at the same time, we managed to find three times more buyers.

For success, discounters need to offer really low prices – so much so that customers are ready to come to such a point of sale on purpose, even if it is not very convenient. This is achieved by reducing costs wherever possible. For such shops, cheaper (often not very suitable) premises are rented. Palletizing eliminates the need to arrange items on the shelves. And employees simultaneously play the role of cashiers, loaders, and cleaners. Another way to reduce costs can be a reduction in the range of goods that require special storage conditions.

Entrepreneurs have been trying to master this format for a long time. One of the first conscious attempts to work in this direction was the “Economy” company “Sibiriada” in the first half of the 2000s. Then, in 2009, Holiday and NTS launched their own Holdy and Economy Leader (both companies ceased to exist).

Nevertheless, the interest of large retailers in the discounter format is obvious. A project of this kind was launched at the end of last autumn by the leader of the Russian market X5 Retail Group – it is called Chizhik (both operating outlets are located in Moscow).

The largest project in this genre currently operating in Novosibirsk is the Svetofor chain (20 stores) from Krasnoyarsk. Last year, Dobrocen decided to accompany her. Outside of Novosibirsk, Omsk “Lowtsen” is quite actively developing in the region. A discounter can also be considered a chain of alcohol stores “Krasnoe & Beloe”, which also entered the Novosibirsk market last year.

The abandoned animal spent 2 days at the station