In Novosibirsk, the staff bit off a spitz’s paw while walking. In Novosibirsk, the owners of two Pomeranians complained to the police about the Staffordshire Terrier. They claim that he bit one of the small dogs and chewed off a paw on the other.

Both incidents took place on Vilyuiskaya street, 15. For the first time, on December 12, the dog of a local resident Anastasia Erokhina was injured . The girl tried to help her spitz when the staff attacked him, but in the end she also suffered from his teeth. Two months later, on February 16, the dog attacked another spitz, which belongs to Lyubov Nasonova.

To sort out the conflict, the NGS correspondent spoke with the spitz mistresses, the police and the owner of the staff.

On December 12, Anastasia Erokhina, according to tradition, went for a walk with her spitz, Thay, in the courtyard of the house. At that moment, a Staffordshire Terrier was walking on the territory of the house with the owner.

– My little dog was on a leash, and the staff on a leash, but without a muzzle. As we walked past, I asked the hostess if we could pass, if he would bite us. The hostess replied: “No, he is generally kind.” We started to pass by, and the staff abruptly, in a second, grabbed my dog ​​in the teeth. My dog ​​completely flew out of the harness. I started to pull it out, but it was useless. She kept her dog, but there was no point in that, – said Anastasia Erokhina.

According to the girl, the dog dragged her with a spitz along the ground for a few more meters. This scene was seen by a passer-by, who dragged the terrier away. After the attack, Anastasia immediately took the spitz and went home, from where she went to the hospitals. In traumatology, the girl was given a preliminary diagnosis – two finger bites – and vaccinated. Thay was examined by veterinarians and he had a blunt abdominal injury.

– We recognized the apartment of the hostess of the staff. When they returned, they went to her. Her husband or roommate came out, he said: “Everything is fine, we will take part in everything.” They seem to have agreed on a peaceful solution. For three days I wrote to him, he ignored me. And three days later he wrote: “Anastasia, I think the question is closed. If you come to me again, I will write a counter statement against you for extorting money, ”the girl explained.

In a WhatsApp correspondence with the girl, the stafford owner first agreed to pay the costs of the medication for the injured Pomeranian. And later, the man abruptly refused the agreement, saying that he had fallen for a provocation with an unidentified person. He threatened Anastasia that he would file a counter statement, since his girlfriend “also had a bite.” Anastasia explained that an unidentified person is her brother, and the man claims that her spitz was also bitten by the owner of the staff.

On December 16, the girl wrote a statement to the police (all documents are at the disposal of the editorial office). However, an unclear answer came from there, where it was said that an inspection was carried out on the fact of the incident, but no violations were revealed. It also specified that the statement was “attached to the accumulative case”. 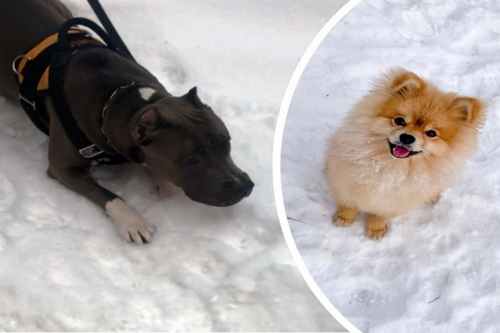 The press service of the Ministry of Internal Affairs explained to the NGS correspondent that the applications for the accumulation case are kept in case such incidents arise later. Therefore, the case is left to the department. The police advised Anastasia to immediately go to court.

Chewed off a paw

The second incident with an aggressive stafford occurred on the eve of February 16. Lyubov Nasonova also went for a walk with her spitz Raphael. Usually, according to the girl, many locals walk in their yard with their dogs, but that day there was no one except the staff with his mistress.

Lyubov, like Anastasia, confirmed that the staff sat quietly at the feet of their mistress – they did not run or bark. He was on a leash and without a muzzle.

– My dog ​​was also on a leash. We walked past, and at some point he rushed from his counter at my dog. The hostess could not hold him back. He grabbed Raphael just by the paw and began to swing in different directions. I tried to take my dog, but as soon as I could, his paw was already in the teeth of the staff. I just turn to the hostess and say: “He bit off his paw.” And she says, “Well, I see.” And then he says to his dog: “It’s already impossible to walk with you,” said Lyubov Nasonova.

According to Lyubov, after the attack, she felt bad. She left the owner of the staff with her apartment number and asked them to “solve everything like an adult,” and then urgently took her pet to the veterinary clinic in the next house. In the clinic, the girl says, she was pumped out with ammonia.

Rafael stayed in the hospital overnight – he underwent surgery. Lyubov managed to contact Anastasia Erokhina, the owner of the Spitz, who had previously suffered from the Staffordshire Terrier. Returning home, the girl found on her door a note with a phone number and the signature: “By the dog.” Love called, the man answered the phone. She clarified whether he understands why they are calling him:

– He replied: “Well, yes, I understand, and what? What’s with the dog, I didn’t understand anything at all, I don’t know anything, I didn’t see anything. ” We sent them a photo of a dog and a severed paw on WhatsApp. He said nothing. They both know which clinic the spitz was in, but they did not call, did not get in touch.

Lyubov noted that on February 16 she wrote a statement to the police about the attack on her dog. She and Anastasia have already contacted a lawyer to draw up a general statement of claim to the court.

The press service of the Main Directorate of the Ministry of Internal Affairs confirmed to the NGS correspondent that the statement was indeed made. A district police officer went to the scene. He reported that the Staffordshire Terrier was on a leash, but the little dog was not.

– We need the staff not to harm anyone else. We understand that the dog has nothing to do with it, putting it to sleep is very cruel. As if we must now decide her fate and put her to sleep with our own hands. As bad as I feel right now, I understand that. As the lawyer explained to us yesterday, there is another option that they can be obliged to go to training, dog training. This dog can be taken away for some time, it must undergo an examination. She will determine whether it is now possible to deduce aggression from her, – explained Lyubov Nasonova.

Love took the dog out of the clinic just today. Raphael does not have his right front paw – the doctors had to completely remove the joint up to the scapula.

The owner of the staff explained that yesterday’s situation looked different. Allegedly, Love with a Spitz herself began to approach the staff. His girlfriend, who was walking with a fighting dog, warned that the staff does not play and is much heavier than a Spitz.

– You need to understand how dogs can react to each other. As a result, Love says: “Maybe they will learn to play.” And he goes further. And then the staff grabbed the Spitz by the leg. That’s the whole story, – explained the owner of the large dog.

The man confirmed that the girls exchanged apartment numbers and dispersed. The owner of the stafford returned home, went up to Lyubov’s floor and left a note with his number. However, then, according to him, only Anastasia Erokhina contacted him, who spoke on behalf of Lyubov.

– She said that Lyubov does not want to communicate with me, that everything is very bad, and communication will continue through a lawyer. And left the lawyer’s number, – he added.

Today, he says, unknown people began to come to their apartment – his girlfriend told him about this. The man had to leave his job and return home. The owner of the Staffordshire Terrier believes that the situation was turned upside down – allegedly the one who did not have time to write about it on the social network was the one to blame.

After the first incident – with the spitz of Anastasia Erokhina – the man, as he himself claims, even paid the sums on the checks that the girl provided.

– Then she somehow with an unidentified person, who eventually turned out to be her brother, even somehow determined where I live. The guy did not introduce himself at that moment. And they came, they say, the issue needs to be resolved somehow – there was a normal dialogue. But this woman asked for fabulous money and said that she would not be able to work 6 or 8 days a week, I don’t remember. I offered her to take sick leave or something else, she replied: “I work for myself.” After a couple of days she was busy with her nails – for me it looks like a deception, – he explained.

The man referred to the fact that he did not trust Anastasia – allegedly she did not have an individual entrepreneur, so she could not prove how much money she actually received. At the same time, he claims that he is ready to compensate Lyubov’s financial damage for the injuries that her spitz received before the trial, but does not know how to contact her:

– The situation is terrible, to be honest. There is nothing you can do about it. It happened, it needs to be dealt with. Now I have no idea whether Love is ready to make contact with me or whether Erokhin turned her against it, so that she could cut it off from the shoulder. This is a mystery to me. I don’t know if I can go to her and just say sorry. I haven’t had such an opportunity yet. I did not know her by sight and only saw her at the precinct – two seconds. We are in shock. I can’t even imagine what state Love is in now.

In September, we published the opinion column of Marina Moiseeva, a resident of Novosibirsk. The woman was severely bitten by a dog on the territory of school No. 177 on Kuprin Street. She noted that dog breeders constantly walk their dogs here without muzzles and leashes. In her column, a young mother tells about her case and discusses what this can lead to. Tinkov announced a historic moment at the bank’s parent company