The Renault Logan driver who knocked down the boy insists on his complete innocence, and the traffic police is still leaning towards the same. This accident happened in Chelyabinsk. A 12-year-old schoolboy was hit by a car at the crossing.

The incident looks controversial: at the time of the accident, the green signal was on for motorists for more than 20 seconds, but the boy himself insists that he began the transition to a permitting one. The child spent several days in the intensive care unit, but now he is recovering. The Renault Logan driver insists on his complete innocence, and the traffic police is still leaning towards the same. We asked the experts what they think of this accident.

“He calls me and says:“ Mom, don’t worry, but I was hit by a car, ”recalls the boy’s mother, Lyudmila. – I immediately rushed there. The driver of Renault Logan stood by the car and did not even come up to the child: he, in my opinion, did not care at all. What kind of person is this? At first, my son was suspected of a compression fracture of the spine, but it was not confirmed, and we were allowed to go home. And after a few days he felt bad.

A neurological examination revealed a concussion, and the student spent several days in the intensive care unit. After being discharged for some time, there were problems with balance, and then he suffered from headaches, but now, according to his mother, the son has already recovered.

“And the other day we were summoned to the interrogator and they began to explain that the driver was not guilty, as my son switched to the prohibiting traffic light,” continues Lyudmila. – I replied that I did not agree with such an assessment and I would not sign anything, and the investigator began to threaten me with criminal liability for perjury. She did not let me say a word, and in the end I wrote that my son moved when the cars were parked. It turns out that she herself slandered her son. But I was literally forced to do this.

What light did the child switch to?

Experts were divided about the incident.

– It is not entirely clear from the video at what light the child began to cross the road, but if he went to green, it is quite possible that the driver will compensate for harm to health, moral damage, and will also receive punishment under Article 12.24 of the Administrative Code – up to and including deprivation of rights for causing a lung or average harm to health, – says Nikolay Popov, a lawyer at Forlex. – But if the boy went to a red light, the driver is released from liability and can claim damage for the wrecked car from his side.

But, the expert emphasized, under Article 1079 of the Civil Code, the driver, driving a source of increased danger, in any case is obliged to compensate for the harm caused to the child.

– Including moral damage, – Nikolay Popov specified. – The specific amount of moral compensation is not spelled out in the law, and when it is collected, both the driver’s and the boy’s guilt will be assessed.

Depending on the severity of the concussion, the insurance company of the driver who hit the pedestrian pays 3-5% of the maximum limit of payments (500 thousand rubles), that is, 15-25 thousand. In the absence of OSAGO, this damage (or more) can be recovered from the driver through the courts. 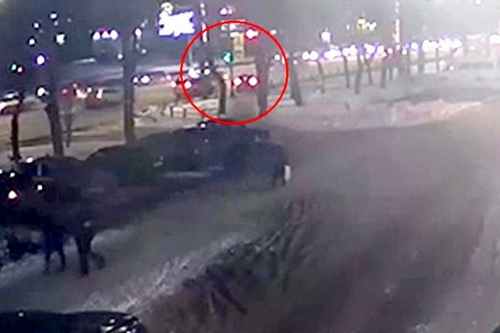 The main question is: what traffic signal did the child start to cross the street at? The boy, according to Lyudmila, is sure that he has begun the transition to green:

– The traffic light there is switched on by a button and does not have a countdown, that is, he could not know how much time was left. And he went to green when it blinked and went out. The cars stopped and let him pass, because the Rules require it, and the Logan’s driver not only flew the fastest, but he still did not brake, although he saw that the cars stopped next to him. The son says that he walked, waving his arms so that he could be better seen.

“In the first frame, when the child becomes visible, he is already walking along the carriageway and has already crossed the right lane of the opposite direction,” he pointed to the details of the recording. – But the cars at this moment have not yet lit green, so the version of my mother that he began the transition to green is probably not far from the truth.

“Not every adult will orientate …”

However, the further actions of the child, according to Dmitry Larionov, make the situation not so unambiguous.

– For about 10 seconds, the boy stands still, which is clearly noticeable, because he blocked the path to the left lane of the opposite direction. Then the child saw that the left lane of the carriageway was empty, and the cars in the two middle lane slowed down, and concluded that the crossing would be safe, and confidently walked forward at a constant speed. At that moment, a Renault Logan was approaching the crossing along the initially empty right lane, the driver of which did not see the child. Its speed, according to my estimates, was about 55-60 km / h, and the child became noticeable about 15 meters before the collision point.

Dmitry Larionov drew attention to the fact that paragraph 4.6 of the Traffic Rules requires pedestrians in such a situation to stop on the line dividing traffic flows (center line). It is allowed to continue the crossing only after making sure that the traffic is safe and taking into account the traffic signal.

Clause 4.6 of the SDA. Pedestrians who do not have time to complete the crossing should stop at a traffic island or on a line dividing traffic flows in opposite directions. You can continue the transition only after making sure of the safety of further movement and taking into account the traffic signal.

“Already on the roadway, the boy realized that he did not have time to complete the transition, and made the correct conclusion – he stopped because the further path was dangerous,” the expert continued. – True, according to traffic rules, he should have stopped between streams, but this is more dangerous, so so far everything is in order. But he could cross the second half of the road only after making sure of safety and taking into account the traffic signal, but he did not take this into account. Humanly, it is difficult to blame him, because not every adult will navigate in such a situation, but, according to traffic rules, this is a violation.

Is the driver guilty?

Dmitry Larionov does not see any obvious violations in his actions.

“Its speed is acceptable, visibility is good, green has been on for a long time, and there is no reason to slow down,” he listed. – Those 15 meters that remained with him after the discovery of the child is not enough for braking, because even on dry asphalt the braking distance at a speed of 60 km / h takes 25 meters.

Usually, in case of severe injuries of a pedestrian, an auto-technical examination is assigned. The question is being resolved whether the driver had the technical ability to avoid an accident, in other words, whether he had time to brake after detecting a danger. If there was an opportunity, he could be accused of violating clause 10.1 of the traffic rules, but in this case he probably did not have such an opportunity.

Andrei Savchenko, Legal Adviser of the Center for Insurance Payments, develops this topic:

– Even if we leave aside the question of which light the boy crossed the road into, the driver has a duty to comply with paragraph 10.1 of the SDA, but it is important to understand whether the driver had the opportunity to do this. Nearby cars blocked his view, and he noticed the child, according to my estimates, 20-25 meters before the collision site. The braking distance from a speed of 60 km / h on winter surfaces can reach 40-60 meters, that is, it seems that he did not have time to stop in any case.

The expert added that children do not always know the Rules and assess the situation, so drivers must be prepared for illogical maneuvers on their part. However, if the driver is put in a desperate situation, full responsibility cannot be assigned to him.

Lyudmila, in turn, insists that since the child has begun the transition to green, the drivers are obliged to let him pass.

– Yes, when the permit signal is turned on, the driver must give way to vehicles and pedestrians completing the crossing of the carriageway in this direction, agreed Dmitry Larionov. – But the green light for cars had already been on for 20 seconds by that time, so can the driver be accused of violating clause 13.8 of the traffic rules? Of course no. Let me emphasize that this item applies to the moment the green is turned on, and not the final phase of its burning.

Clause 13.8 of the SDA. When the permitting signal of the traffic light is turned on, the driver is obliged to give way to vehicles completing the movement through the intersection, and pedestrians who have not finished crossing the carriageway of this direction.

By the way, the Renault Logan driver did not have the obligation to reduce speed due to the slowdown of cars in adjacent rows: paragraph 14.2 of the SDA requires this only before unregulated crossings. However, experienced drivers often slow down in such situations, because the slowdown of adjacent rows usually means that there is danger ahead.

Teach children to transition to the “new” green

And yet, what did the child have to do in such a situation? Perhaps it was safer to return to the sidewalk, because the first car (in the farthest right lane from us) stopped and the path to retreat was not blocked. The second option is to stand in the middle of the carriageway: there is no safety island at this crossing, but there is a dividing strip in the form of markings.

The root cause of the problem was the child’s exit on the roadway to late green, and Dmitry Larionov added:

– I would advise parents to teach their children to cross wide roads only when the green signal of the traffic light has just turned on. If he does not know when the green turned on, it is better not to start the transition and wait for the next phase. In no case should you run on the carriageway, even if it seems safe.