Novosibirsk boasted a video of overtaking a police car. For the previous video, the driver has already received a fine

The Novosibirsk resident, who started the shooting on Lenin Square, posted another video showing him overtaking a police car in an oncoming lane. The expert said that he could be threatened for new offenses.

The video, a little less than a minute long, was posted by the author on his Instagram page. It shows how the car overtakes others in the oncoming lane, among them there is a police officer. In the video, the driver drives through a red traffic light.

– A new release on a new machine, – wrote the author of the video, Vasily. He clarified that this time there was no shooting, and filmed the video a week ago.

When asked if he was worried about the safety of other people on the road, the Siberian replied as follows:

– We worry, of course, for others, well, we try to be careful. Everyone reacts differently to driving style. The police reacted, issued a decree for everything: oncoming lane, no numbers, toning, red.

Vasily did not begin to tell in more detail about what exactly was in the decision on the administrative offense. The NGS correspondent contacted the head of the Novosibirsk regional office of the Federation of car owners of Russia Vyacheslav Ashurkov to find out what could threaten the offender:

– Firstly, the police can react to the information posted on social networks, including Instagram. Therefore, this video can become proof of the driver’s guilt. We know to whom the account is linked, what is the name of the person – we have the opportunity to start an investigation of an administrative violation. And through this administrative investigation to find out that it was this person who was driving. 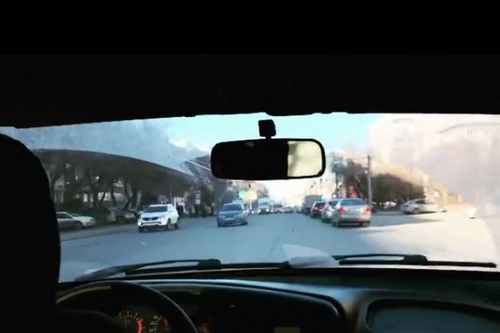 Vyacheslav Ashurkov also clarified that with the help of the video it is possible to recognize a specific police crew that has overtaken the intruder. It is important to establish that the roller is not mounted.

– Then, with the help of video, we draw up protocol by protocol. Here we see how he drives into the oncoming lane, so he drove through a red light. There are articles of the Code of Administrative Offenses, on the basis of which the inspector himself can impose a punishment on the driver. This is usually a monetary fine. Everything that is connected with leaving the oncoming lane is a subpoena, – explained Vyacheslav Ashurkov.

The specialist also clarified that in this case the magistrate will decide on the application of punishment to the offender, depending on various factors – whether the citizen of Novosibirsk systematically violates traffic rules, how he will behave in court, whether he admits guilt.

– For a prohibiting traffic light – a monetary fine, a protocol will be drawn up by an inspector. But first, you will need to build a logical chain with the help of a video in order to understand that this is the same driver, the expert summed up.

In March, Vasily had already posted a shocking video in which black Zhigulis were driving along Krasny Prospekt past Lenin Square, and the driver was firing a burst of machine-gun fire from the window. Then the man admitted that he creates such videos “for the sake of hype content.”

– I have such content. For the sake of subscribers. They like it, I do. And he [the machine gun] is idle, he does not pose any threat to others. You can say I live on Instagram. I do for the sake of all this hype content.

The man said that there was another person in the car then, he was also engaged in video filming.

The police immediately started looking for him, and soon the Ministry of Internal Affairs identified the driver of the Zhiguli. It turned out to be a 23-year-old resident of the Zayeltsovsky district. A case was opened against him under Part 2 of Art. 20.13 of the RF Code of Administrative Offenses “Shooting from weapons in settlements or in other places not designated for this.” The judge of the Central District Court sentenced him to a fine of 40 thousand rubles, with the confiscation of an empty Kalashnikov assault rifle and cartridges.

Where do the biggest tomatoes grow in Russia?