A plot with a forest near Novosibirsk was sold according to a cunning scheme for the sake of a store. Residents of an apartment building in the village of Kudryashovsky rebelled against the felling of many meter long pines on the site where the construction of a store is planned.

One of the local residents filed a lawsuit to interfere with the construction in front of the house and began to figure out how this site was generally sold. The woman discovered a cunning scheme for transferring part of the forest to a building zone.

NGS correspondent Ilya Kalinin listened to both sides of the flaring up scandal and even talked to an unwitting participant in the bureaucratic deception, as a result of which building became possible on the forest with pine trees.

How the pines were threatened with logging

Residents of a high-rise building on Oktyabrskaya Street, 7a in the village of Kudryashovsky began to fight against the development of a green area in front of their house. There are more than a hundred multi-meter pine trees here, which should be demolished due to the construction of a store.

This whole story for the developer – the Dagaz company – and for the residents of the 100-apartment building began in January 2020. Then the locals were surprised to find that the green area with pine trees in front of their house began to be fenced off with fence posts. Then a trailer with a watchman and a toilet appeared there. So it became clear that the area with pine trees left from the forest was transferred for building, and now there will be a store here. Later, when one of the residents filed a lawsuit on the upcoming construction site and the site was arrested for the period of the proceedings, the developer removed all objects from there.

“Some of the pines are over a hundred years old. We believe that this site should be preserved in the village, and it is a forest, not a shrub, as it is written in the documents. How can a pine tree with a height of more than 20 meters be called a shrub? – Natalya Stroeva, a resident of the house, is outraged. 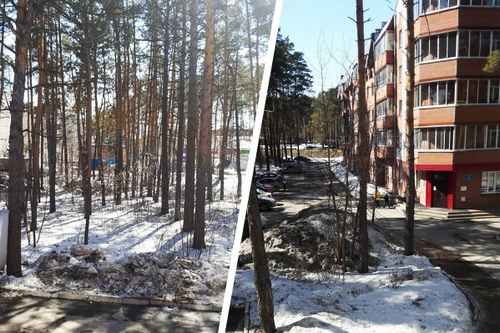 According to the woman, the absurdity of the situation also lies in the fact that a large store is already operating across the road from this forest area – literally a few meters away. And there are two more shops nearby.

“When we saw that we had fenced everything off in one day and were going to cut it down, we immediately called the prosecutor’s office and raised everyone’s ears. The prosecutor’s check came and said [to the developer], they say, how do you cut it down? There was not even a felling ticket there, ” said another resident, Yuri Korolev.

In this regard, as residents believe, one of the activists – Olga Begchenkova – has filed a lawsuit with the Novosibirsk District Court as a lawlessness.

What the developer and the owner of the site say

The owner of the controversial site and the developer is the Novosibirsk company “Dagaz”. One of the residents of the house, in a conversation with an NGS correspondent, noted with a sigh that she understands: the developer owns the plot legally, since he absolutely honestly acquired it from another legal entity – Ahava – Siberia LLC. The former owner was also going to build a store here, but at some point got rid of the site, not even having time to pay, according to residents, a permit for felling.

The general director of Dagaz LLC and its real owner, Konstantin Dagayev, explained that he absolutely legally acquired this site in October 2019 from Ahava – Siberia for over ten million rubles.

– This plot has been granted permission to build a 1,500 square meter shopping center by [the previous owner]. But I decided to slightly change the concept and reduce the building area – accordingly, leave the plantings between the residential building and the store. 900 “squares” are quite enough for us. In fact, if we had not reworked the documents for our project, then last year we could have cut down [the trees], – said Konstantin Dagaev.

However, the new owner had neither a building permit nor a felling permit. With which he agrees and calls it his mistake, but assures that he wants to do everything right.

– Now I sincerely do not understand what the citizens do not like. Do they want there to be a patch of forest in the middle of the Curls? It will remain, it will simply become smaller. There will be a forest between the house and the store, citizens will see it. We just put the territory in order. And now there is rubbish, it is impossible to walk there, – Dagaev wonders.

In a conversation with an NGS correspondent, the developer clarified that out of four thousand square meters of forest he plans to cut down only a quarter – one thousand meters.

Residents, in response to this, are also perplexed: what kind of forest will remain there if the entire width of the green area between their residential building and a working store on the other side of the pine trees is within 50 meters? If we take into account the standards in GOST for indents between buildings, says Olga Begchenkova, then the width of the store will be three or four meters.

A clever scheme for transferring the forest for building

Olga Begchenkova, who filed a lawsuit, carefully studied the history of this site since the early 2000s and discovered a strange scheme according to which the territory, which once belonged to the forest fund, became suitable for both construction and felling.

According to Begchenkova, she discovered that according to documents, before 2002, this site belonged to the forest fund, and after 2008, plots for individual residential construction have already appeared on this territory.

– According to the town planning code that existed at that time, in order to determine which zone the land belongs to, it is necessary to go through this procedure through public hearings. But they weren’t. I sought both in the village council and in the district administration: show the document in which [says] after you received this land from the forest fund, who classified it as zoning for individual housing construction. And I never received an answer, – explained Olga Begchenkova.

The woman managed to find out the chain of owners of this pine plot. Before “Dagaz” it was owned by the company “Ahava – Siberia”. Prior to this company, the site was owned by an individual – Dmitry Afanasov. Afanasov, in his time, received this fragment of the forest, combining it from the purchased three small plots, which, in turn, were owned by other individuals: Sergei Demyanovich, Nina Raeva and Maxim Mozhin. Begchenkova tracked down Maxim Mozhin and even brought him to court to testify. True, the testimony of the very first owner of one of the three plots, which eventually went to the developer, did not affect the court’s decision.

The NGS correspondent also contacted Mozhin and found out that several years ago one of the leaders of the Kudryashovsky village council suggested that he “help the village”. The help consisted in the fact that Mozhin received the land plot and transferred it with a power of attorney to another person.

A high-ranking official, whose name Mozhin did not name, explained that some other volunteers would do the same, and all this was needed, they say, to form a large land plot on which the Kudryashov Sports Palace would supposedly be built. Mozhin voiced the same story in court.

The Palace of Sports was indeed built, but the Mozhinsky site, probably like some others, was not at all where the sports facility was built. In 2020, Maxim Mozhin learned that, as a result, his site was sold for a million rubles. He himself did not receive a dime from this deal. After such information, Mozhin tracked down the person who, with his power of attorney, sold his own land plot profitably, and offered to explain himself.

– In short, to my question, they say, how did it happen, they told me: “Well, it worked and it worked. Forget it all. ” But I said that I would not forget anything, I packed myself up and went to court. And I’ll go, if need be, ”the man sighed.

What local authorities are responsible for

Local authorities, represented by the leadership of the Kudryashovsky village council, disowned the conflict, explaining that they would wait for final court decisions.

The Novosibirsk District Administration was unable to promptly comment on the conflict and clarify who and how allowed the transfer of forest plots for individual residential development several years ago to the NGS correspondent. An administration official asked to send questions by e-mail, promising that the request would be considered no later than the legal deadline.

What the court decided and how the residents are inclined

Recently, the Novosibirsk District Court ruled to refuse to satisfy Olga Begchenkova’s claim and recognized the right to dispose of the plot with pine trees for its current owner, the Dagaz company. A copy of the judgment is at the disposal of the editors. However, the restrictive measures have not yet been removed from the site – the plaintiff Olga Begchenkova appealed this decision in the Novosibirsk Regional Court.

In a conversation with an NGS correspondent, one of the residents of the house, assuming a possible negative scenario, confidently noted that the residents were determined and would go out, if necessary, to personally stop construction equipment and chainsaws.

In February, we wrote about how two plots between Nizhnyaya Yeltsovka and the Sh microdistrict, surrounded by forest, and according to documents, were actually transferred for residential development. The deputy said that they want to cut 2,000 trees for high-rise buildings.