Novosibirsk residents opposed the reduction of parking at the new business center. In Novosibirsk, a conflict flares up between Ecostroy-Holding, which plans to build a business center on Narymskaya Street, and local residents.

The developer asked the authorities to allow him to reduce the number of parking spaces from 305 to 141, which caused discontent among residents of nearby houses. On the e-democracy site, where public discussions of the project take place, they left comments in which they asked to cancel the project and check it again.

What and where does Ecostroy-Holding plan to build

A 20-storey office building is to appear on Trubnikov Square in the Zheleznodorozhny District. The plot with an area of ​​2836 square meters is now occupied by a one-storey building, in 2GIS it is marked as a “structure”. Work has already begun here – the workers put up a fence and began to clear the site.

As the coordinator of the Maimed Novosibirsk movement, Mikhail Ryazantsev, explained, the building should appear on the site of the “temporary hut” built in 2019 by the municipal enterprise “IMI”. Now the object is planned to be radically rebuilt.

– I have questions about the management of the city’s municipal property. Some commercial enterprise begins to promote some projects on municipal land, on which a building was recently built by a municipal enterprise. And I think these are strange things. The question is: what will the city get from this? He added.

According to the project, the developer will erect a building on Narymskaya with public premises and a parking lot. The developer asks to reduce the number of places in this parking lot by almost half, explaining this by the fact that “the configuration of the land plot is unfavorable for development.” The other 164 parking spaces (according to the standards, the number of parking spaces should be 305 for such a building) will be rented by the developer in the nearest GSC “Linear”.

Initially, the comments under the project were left by residents who demanded not to give the authorities permission to reduce parking spaces.

– I ask the commission not to give permission to deviate from the maximum parameters of the permitted construction, reconstruction of capital construction due to the lack of sufficient number (deficit) for a 20-storey building (according to the project) parking spaces, namely 305. The alleged actual lease by the applicant of 164 parking spaces at GSK Lineyny, I and other owners question it, and there are also assumptions about the fictitiousness of such a transaction, which has already been offered to the owners of the house at 15/1 Zheleznodorozhnaya. Moreover, based on the principles of reasonableness, such a lease should be equal to the service life of the applicant’s capital construction project, while the service life of the GSK structure is currently unknown. I ask you to be critical of the lease that has been sent to you and to carry out a check, they wrote.

Over the past two days, comments have also appeared on the public comment site to support the developer. Users all as one point to the emergence of new jobs, and the unfavorable conditions for construction are explained by the nearby railway. 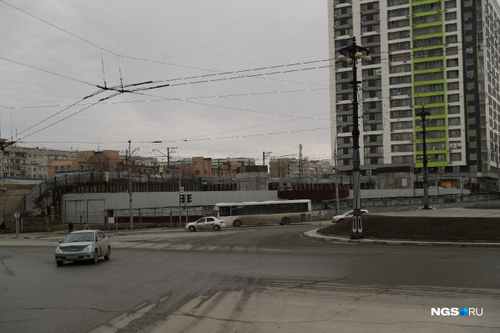 Alexander Chernokulsky, who lives nearby, told the NGS correspondent what does not suit the residents of nearby houses:

– As for me, the city is already overloaded with cars. And to create on the square with a roundabout a place like “Aura” or the Central Market, where parking cars create a huge traffic jam, as for me, is not entirely true. This is definitely a deterioration in the quality of life of the townspeople. There, after all, there is an apartment complex. These are like residential buildings, but in fact – apartments. They were built with reduced standards, therefore the developer could not build them up with residential buildings – there was not enough land for parking, and there were railway tracks nearby. And now Zheleznodorozhnaya Street is filled with parked cars. And the site on Narymskaya is already a bottleneck. Imagine what it would be like if another 20-storey business center appeared.

According to him, the lease agreement for parking spaces in the garage complex was not attached to the draft discussions.

What does the developer think about the objections of local residents

The company “Ecostroy-Holding” explained to the NGS correspondent that they did not see any comments from residents dissatisfied with the project. And they promised to answer the questions after studying them.

– The lease agreement with GSK was in the project materials. That is, why it was not posted on the site is already a question for the mayor’s office. Probably, they decided so. There is a contract, the garage complex is located 120 meters from the future building, the company explained.

However, after getting acquainted with the feedback on the project left by residents, Ecostroy-Holding refused to talk to the NGS.

– Have you read what is written there? Well, what kind of comments can there be? No, we will not give anything, – they answered there.

A new developer has appeared in the Yuzhno-Chemsky residential area: in early April, the Omsk precast concrete plant No. 6 received a permit to build its first house in Novosibirsk.