In Novosibirsk, residents of the new residential complex started a war with a taxi company on the ground floor. In the courtyard of the residential building there are branded cars “Yandex.Taxi”

Residents of the Leninsky district of Novosibirsk from the Krymsky residential complex started a war with the head of the taxi company – he rents an office on the first floor of a residential building on Parkhomenko Street, 27/1. The owners of the house complain that the cars of the taxi fleet take up parking spaces in the courtyard.

– The situation began at the end of December 2020, when the tenant of the administrative premises on the ground floor changed in the building. In total, there are three office premises in the house, and according to the papers, they are entitled to two parking spaces during working hours – up to 18 hours. They are prohibited from leaving their cars at night. Negotiations were conducted with the owner of the premises on the part of the Criminal Code and the council of the house, – said one of the owners of the apartment in this house, Anna, who asked not to give her last name.

In the marketing department of the company – the developer of the Krymsky residential complex, on the issue related to the taxi company, they asked to contact the management company. SKY DOM Management Company told the journalist that residents talked about the problem in February, but the company explained that they could not influence the situation.

– One of the non-residential premises was leased by the owner to the Taksomotornsk company. We contacted Yandex.Taxi, but there was no answer. The only thing we were able to contact was the deputy director, who in mid-February promised to settle the issue and said that 4–5 cars would be removed outside the territory. In the beginning, the situation seemed to have changed, they stopped smoking en masse on the porch, after a while everything repeated. Cars with the Yandex.Taxi logo are periodically parked on the territory, but we cannot influence here. The district administration also replied that this is not within their competence. The owner of non-residential premises, it seems to me, makes no difference. He gets money for renting, – explained Nadezhda, lawyer at SKY DOM Management Company. 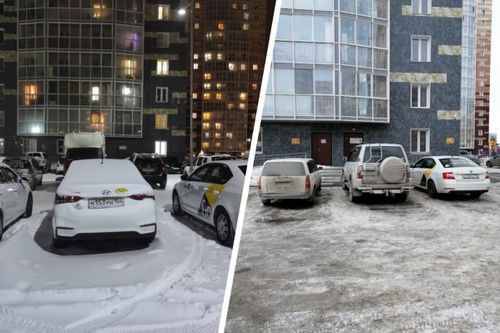 The lawyers of the Criminal Code helped the tenants compose the text of the statement, copies of which they sent to various departments with a request to resolve their issue.

– In the courtyard, there is an active movement of taxi transport, respectively, the air pollution is increased. Apartments are located on the first floors. Residents suffer from constant noise and inability to open windows. Children live in our house, and the active movement of unauthorized cars and people is unsafe, the text of the letter says.

The document also claims that employees and visitors of the transport company violate fire safety rules by smoking on the porch. The tenant also actively uses the gates that are installed at the expense of the residents of this house, increasing the risk of breakage.

Attached to the letter are about 80 signatures of the residents of this residential complex. Nine letters were sent to various authorities, including various government departments, the administration of the Leninsky district, the prosecutor’s office, the heads of the Ministry of Emergency Situations, the Main Directorate of the Ministry of Internal Affairs, Rospotrebnazdor and the head of the tax service. Written requests and responses from departments are at the disposal of the editorial board.

So, in the administration of the Leninsky district, the applicants were told that the solution of issues on the use of common property in apartment buildings does not belong to the subject of municipal housing control. The Ministry of Emergency Situations told the residents: restrictions on smoking in yards are not provided for by fire safety requirements. In other departments, residents were also unable to help.

What they say in the taxi company

According to information in 2gis, in the building at 27/1 Parkhomenko Street on the ground floor there is an office of the Taksomotornsk company, which is engaged in car rental. Yandex.Taxi did not comment on the situation, advising the NGS journalist to contact the taxi company itself.

– Yes, people came to us. Yes, we rent cars, we do not sell drugs. We meet and see people off, what’s the problem? Firstly, there are not many cars there. Well, 1-2 cars, nothing more. We have two parking spaces, why are we not allowed to use them? We rent an office in this building and are entitled to them, like other residents. The owner of this premises told us that we have the right to park the cars, – Igor Khlebnik, director of the Taksomotornsk taxi company, commented on the conflict.

The owner of the premises told the NGS journalist that he was aware of the residents’ complaints, but had never encountered more than two taxi cars parked in the courtyard of the house.

– I asked to send photographs, they tell me that 1-2 cars are standing. To keep everything busy – this was not the case. I have no evidence that the seats are really occupied and there is nowhere to put. I, too, cannot show tenants. And they have rights. It is supposed that there are parking spaces for each office. This is not anyone’s private parking lot. In fact, one office has two parking spaces. The territory is intended for everyone, and for offices on the ground floors.

This is not the first time the villagers have gone to war. In early March, residents of an elite residential complex in the center of Novosibirsk began to complain about the trash can of a neighboring house. Mountains of waste are constantly dumping out of the garbage cans, sometimes they burn, and rats run around nearby. And all this happens next to fashionable boutiques, where Novosibirsk residents with above-average incomes come. Residents of the house attacked everyone they could with complaints, but they did not solve the problem. In their letters to the State Housing Inspection and to the mayor of Novosibirsk Anatoly Lokt, they promised to reach the presidential administration of the Russian Federation.

An unusual model from Zambia met love in Novosibirsk