Residents of an elite residential complex in the center of Novosibirsk demand to clean up the trash bin of the neighboring house. Residents of the house on Krylova unsuccessfully demand to remove the garbage container from under their windows – they wrote letters even to the mayor and to the prosecutor’s office

Residents of an elite residential complex in the center of Novosibirsk complain about the trash can of a neighboring house. Mountains of waste are constantly dumping out of the garbage cans, sometimes they burn, and rats run around nearby. And all this happens next to fashionable boutiques, where Novosibirsk residents with above average incomes come.

Residents of the house attack everyone they can with complaints, but they do not solve the problem. In their letters to the State Housing Inspection and to the mayor of Novosibirsk Anatoly Lokt, they promised to reach the presidential administration of the Russian Federation. The details of the conflict are in the material of the NGS.

How someone else’s trash was near the house

Residents of the residential complex “Quiet Dvor” on Krylova, 4 are fighting the trash bin of a neighboring house, which has appeared on their territory. They said that until about 2017, near the Novograd business center (at 55 Krasniy Prospekt) there was a metal garbage container used by its tenants. But then the management company of the Dost-N Management Company moved this container to the house on Krylova, 4. As residents write in their complaints, this happened without the consent of the owners and without the knowledge of the Tikhy Dvor HOA, which serves it.

– Waste bins are often overfilled and are positioned so that they block the exit. I fought with rats all summer. It stinks in the summer, ”Larisa Bulysheva, Chairman of the Board of the Tikhy Dvor HOA, describes the problems.

Formally, the garbage container was placed to service the neighboring house on 57 Krasniy Prospekt. But, according to the observations of local residents, people from all over Krylov Street are now carrying waste there, walking towards Krasny Prospekt. That is why garbage accumulates here too quickly, and the Criminal Code does not take it out regularly. 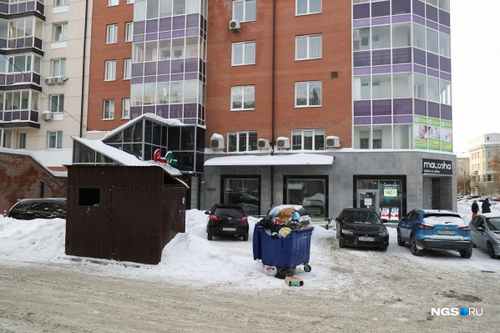 People have been writing complaints about the trash can for several years – they have accumulated dozens of appeals to various authorities. They sent copies of letters to Dost-N, Ecology-Novosibirsk management companies, to the State Housing Inspectorate, to the Prosecutor of the Central District and the head of the Central District Administration, to the Minister of Housing and Utilities and Energy of the Novosibirsk Region, to the head of the Office of the Federal Service for Oversight in the Sphere of Rights Protection consumers and human well-being in the NSO.

– In addition to the fact that the container makes it difficult for cars to leave the parking lot of the “Quiet Dvor” HOA, the passage of special equipment, even the elementary operation of the specified container during the entire time is carried out with flagrant violations of sanitary rules – the container is cleaned irregularly, the wind carries garbage, and fires have repeatedly occurred in the container with the height of the flame up to the 2nd floor of the house, flocks of 15 rats gathered, – writes Larisa Bulysheva, chairman of the board of the Tikhiy Dvor HOA, in one of her addresses.

According to her, the HOA for several years has been complaining about the improper maintenance of the container to all authorities, attaching photographs, videos to the complaints, and in response, at best, receives a reply.

In their autumn appeals to the director of the Dost-N Management Company Pavel Goldenfang and the mayor of Novosibirsk Anatoly Lokt, they demanded that the garbage container be eliminated and promised to go with complaints to the Administration of the President of the Russian Federation:

– We are compelled to warn that in the absence of response to the complaint of the HOA “Quiet Dvor” will be forced to file a complaint about the inaction of the relevant authorities of Novosibirsk to the Administration of the President of the Russian Federation.

What is interesting about this house

People are not far from walking to the reception of the President of the Russian Federation in the Siberian Federal District on Derzhavin Street. Residential complex “Quiet Dvor” is located on Krylova Street, next to Krasny Prospekt. This is a brick residential complex of variable number of storeys (from 6 to 10), which was built by ZAO ISK Novograd in 2004. There are many elite boutiques on the ground floors of the residential complex – the Baldinini shoe salon, the Billionare men’s clothing boutique and the Geneva watchmaking salon chain, as well as the Dessange beauty salon.

How tenants respond to complaints

As the State Housing Inspectorate described in the responses, inspections of the dumpster were carried out, but everything was fine. For example, a specialist from the Department of Energy and Housing and Utilities did not make any comments after inspections on May 23 and June 2, 2020. There were no complaints from the expert of the municipal housing inspection committee on June 16.

The Dost-N management company was asked to install a closed type of container, to strengthen the work of the janitor and to consider the possibility of installing a video camera, according to a response signed by the head of the Central District Administration, Sergei Kanunnikov. People were asked to go to court to liquidate the waste site.

In the fall, residents of the prosecutor’s office wrote that on August 25, the Criminal Code installed a new closed container platform with a compartment for bulky waste. On September 7, specialists from the Central District Administration examined the territory and “found it in a satisfactory sanitary condition.” On September 29, the district administration added that they had issued a warning to the Criminal Code that if they did not clean up the garbage well, they would violate the terms of the license.

In February and March 2021, residents continued to send fresh photos of the trash can on Krylov to the editorial office of the NGS, accompanied by comments:

– She, as always, is not cleaned. In addition, the owner of the trash can also does not clean the driveway near it. As a result (in the photo you can see) the cars leaving this passage are damaged. The next letter I will send the last letters – complaints of the HOA, in electronic form. There is no answer to them yet, they were sent in February, – said Svetlana Kolyadina, lawyer of the HOA. 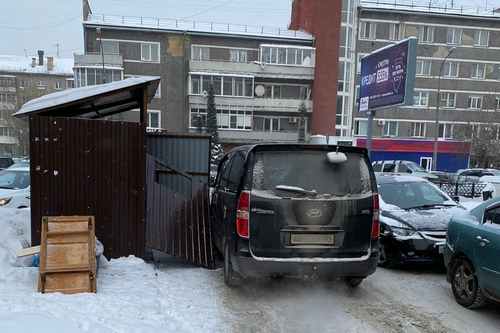 Fresh complaints demanding to remove the container were again sent to Dost-N, the State Housing Inspection, the Minister of Housing and Utilities and Energy, the Prosecutor and the Head of the Central District Administration, to Rospotrebnadzor and the Mayor of Novosibirsk Anatoly Lokty.

How people suggest to solve the problem

As Larisa Bulysheva explained, they are ready to make a trash can for a neighboring house on 57 Krasniy Prospekt in a nook on the land plot of their house for their own money and are ready to give out magnetic keys from her. However, according to her, Dost-N Management Company does not meet halfway.

– Let’s move the trash can to the cubicle. She will disappear from the road. After all, what’s the problem – the whole array goes to the metro station and carries garbage just along the way – they don’t care where to throw it out. They walked over and threw them. And there she will be invisible. And I can calmly clean the snow here, – explains Larisa Bulysheva.

What they say in the UK

The director of the Dost-N Management Company Pavel Goldenfang recalled that when the “Quiet Dvor” residential complex was built, people refused to let neighbors with garbage enter their territory. Therefore, the Criminal Code was forced to put the tanks where they are now.

– That they are ready to start up now, I hear only from you. We talk to them twice a week. Of course, if they agree, if we find some kind of compromise solution, I’m all for it, ”commented Pavel Goldenfang.

According to him, they used to take out bulky waste themselves, they did it more often and better than Ecology-Novosibirsk, which is doing this now.

– And then problems began to arise – apparently, they do not have enough cars. If you regularly take out the garbage, then there will be order. The container yard itself is not super aesthetic, but it is normal. And the chairman of the HOA believes that we are not cleaning it well. Once a day they are taken to this facility. There are also failures, although we throw them on the telephone message. There is a problem, and I would be glad if we could solve this problem together, ”concluded Pavel Goldenfang.

Residents of another prominent house in the city center, near the Aura shopping and entertainment center, decided to fire the guards and concierges, but the HOA does not allow them to do this. They also believe that 3.3 million can be spent more efficiently.