Sberbank’s partner in the creation of the Novosibirsk branch of School 21 was 2GIS. Sberbank and 2GIS have opened a free school for programmers in Novosibirsk

On March 30, Sberbank and 2GIS (which Sber recently bought) announced the start of accepting applications for School 21, a new type of educational institution whose graduates will be able to claim salaries that are several times higher than the average income in the Novosibirsk region.

But not everyone is destined to enter there – more than 100 people are waiting for the competition at the school. What is the difference between School 21, who and how will be able to study there, and other interesting details of the new project – in the material by Stas Sokolov.

What an unusual school without teachers and a class schedule

School 21 is a project of Sberbank. It has existed for the third year already, and now it has two branches – in Moscow and Kazan. These are not some kind of crash courses – it usually takes two years to complete the 21 steps of study. “Usually” because, as the head of the “School” Svetlana Infimovskaya says, the school does not have a rigid schedule of classes, theoretically it can be completed much earlier or significantly later.

Actually, there is nothing in it with which it is customary to associate an educational institution – classrooms, teachers, lectures, etc. According to Svetlana Infimovskaya, teaching is a sequence of tasks that a student will have to perform. But how to do it, he has to find out for himself. To do this, there is a search on the Internet and other students to whom you can turn for advice or even unite in small groups on your own.

The director of the Novosibirsk School 21, Ivan Chubchenko, believes that the fundamental difference between the School and ordinary educational institutions that simply teach programming is that the students here are simply forced to communicate with each other, learn to work in a team, which is very important for real work, and which is impossible to learn on your own, simply by mastering some programming language. For the same reason, classes at the school will be full-time. Svetlana Infimovskaya says that the forced transfer of classes online during the acute phase of the pandemic had a negative impact on the speed of mastering the material.

Another unusual feature of the work of an educational institution will be the absence of a fixed timetable. Students will have at their disposal training rooms with computers, open around the clock and working seven days a week.

“In Moscow and Kazan, it’s a normal situation when on New Year’s Eve there are people in the classrooms, and they work – simply because they are interested in doing this,” says Ivan Chubchenko.

This circumstance makes it possible to enroll more people in the school than there are jobs. Someone will come early in the morning, someone only in the evening. Moreover, according to the practice of existing schools, a third of students are forced to combine study with work.

Who will be taken to a free school for programmers

Age, education and the degree of initial training will not play a significant role in admission, Svetlana Infimovskaya promises. The age of students now starts at 17 years old, and the oldest is 64 years old. And only half of them had some kind of science or engineering education before entering, many came from professions that have nothing to do with either programming or mathematics. There are also examples of return. Infimovskaya spoke about a student who once studied mathematics and programming, but wrote the last program 30 years ago, and then worked in management positions.

– According to him, he just wanted to test himself by going through the “pool” (a month-long course of introductory tests. – Ed.), But he got so carried away that he went through the whole course. Now he works in the field of Data Science (data science. – Ed.), – says Infimovskaya.

Well, and the most unexpected thing – education at the school will be free (the scholarship, however, is not provided), and even a certain number of places in the hostel have been prepared for nonresident students.

But not everyone will be accepted. Applicants will have to go through several stages of selection. Having left an application on the school’s website, the applicant will have to perform several tests (in the form of online games), which should help to understand whether the applicant has a penchant for programming in principle. Those who will cope with the proposed tasks will need to explain during the video interview why they actually need this education. The last, the most difficult stage – the so-called “pool” – a monthly intensive, during which the applicants will have to learn and solve the tasks themselves.

The competition during the last recruitment in the Kazan branch of the school amounted to 120 applications for one place. Not everyone succeeds in completing their studies, some of the accepted students are eliminated simply because they are unable to study independently with the required intensity. And this is also one of the skills that the school must teach – an employer needs a specialist who can take a large amount of work and bring a finished product (or some part of it) so that it does not need to be controlled and adjusted.

What salaries will graduates be able to claim

After a year of study, students will go on an internship (they must also find a place for themselves) and, in principle, at this level of knowledge, people will be able to find a real job for themselves, says Ivan Chubchenko. In the absence of any specialized experience or education in this area, such an employee can safely claim a salary of 40-60 thousand rubles.

Those who complete the entire course must become ready-to-work professionals, whose income will depend on the availability of related skills and knowledge. Infimovskaya says that in the short history of the school there are examples when graduates were taken by large companies for salaries of 150, 200 and even 300 thousand rubles. True, in such cases it was a question of mathematicians or programmers with some experience, whom the “School” allowed to simply “improve their skills.”

Why is it for Sber and 2GIS and where else can you learn programming?

School 21 is a rather expensive project – 2GIS, for example, will allocate as many as three floors for it in the Sun City business center (the company at various times bought up half of the premises in this office tower). When asked why Sber and 2GIS need this, company representatives answer in such a way that it is, they say, a social, charitable project.

At the same time, both the bank and the cartographic service admit that they feel an increasingly acute shortage of IT specialists. Firstly, this is, in principle, a difficult craft that requires a very special mindset, and secondly, even a person with such a mindset needs to learn a lot before he will be of any value in the labor market.

Now programming is taught (in addition to the specialized specialties of universities) mainly in paid courses, which not everyone can afford. For example, the full program Yandex.Practicum (10 months) costs 216 thousand rubles in Novosibirsk (if you pay for it right away) or 14 thousand rubles for each month of study. The Geek Brains school offers a whole set of courses at a rate of 7,490 rubles per month (however, the school promises to start taking payment only from the seventh month of study). “Computer Academy Step” offers several large courses from 2.5 to 3.5 years with a monthly cost of 5659 rubles.

Having its own free, but making high demands already at the stage of admission, the school will allow Sber to collect what is called “intellectual cream”, regardless of whether these people have financial opportunities for education. This allows us to get as future employees people who in other circumstances, in principle, could not apply for such vacancies. 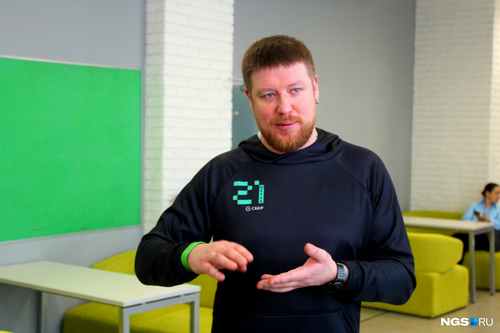 2GIS says that the number of vacancies in the IT industry increased by more than 17% in 2020 and continues to grow. As for salaries, here, of course, everything very much depends on the specialization, specific skills and the level of tasks that the employee will have to solve. So, on the HeadHunter website in Novosibirsk there are vacancies with a salary of 25 thousand rubles (PHP-programmer), and 70, and 180 thousand rubles.

The advantage of the IT sphere is that knowledge and skills in it are quite universal. A person who has reached a certain level may be in demand not only throughout Russia, but also globally. This is partly the reason for the shortage of employees in the Russian market. When ready to move, an experienced specialist can find work in other countries, which forces employers to focus more on this – the world level, and not on the average salary in the region.

Studying at school will not mean obligations to work in the structures of Sberbank, however, the bank says that they will be ready to accept graduates both in the bank itself and in its many services. For example, in April, the Samokat grocery delivery service enters the Novosibirsk market, which has been co-owned by Sberbank since the spring of last year. This and any services similar to it are based on IT solutions, the work of which is impossible without qualified programmers.