In Russia, for the second time, rallies were held in support of opposition politician and blogger Alexei Navalny, related to his arrest. A wave of uncoordinated rallies and processions began in the Far East, people took to the streets at noon.

In different cities, they prepared for the actions in different ways and met the protesters with different methods – somewhere they were prevented from entering the square, and somewhere, on the contrary, they were not allowed to leave it. But it is obvious that this time the preparation was more extensive. This is evidenced by the number of security officials on the streets of the cities – there were noticeably more of them. Also, many protesters said that this time the riot police and the police were more coordinated.

Snow removal equipment was actively working in Bratsk, Irkutsk region. An accelerated video is gaining popularity on the Web, in which a vehicle has been making circles for several hours over an area already cleared of snow. In one of the Bratsk groups on social networks, they write that cars were spinning in the square under the supervision of the police for two days.

Another “tactic” that the security forces used to prevent mass protests was to shut down everything and everyone. This was how they acted in Moscow, where they introduced restrictions throughout the city center – they closed not only metro stations, but also central streets. The protesters quickly changed collection points at metro stations, and the police kept up with them, closing one after another. Several streams of protesters were also not allowed to connect – the streets were blocked by paddy wagons, and the crowd was pushed back from the square of three stations.

In Yekaterinburg, the procession took place, although here, too, people were divided into two streams. Near the Drama Theater, where the protesters came, riot police were waiting for them. After a while, he began to force people out of the square near the theater. People went out onto the ice of the City Pond and began to cross it, the security forces did not follow them. 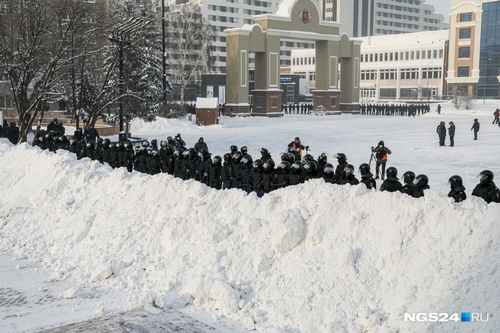 The longer the rallies continued, the more severe the detentions became. In St. Petersburg, where the protests began at noon local time, electric shockers were used against the protesters, one of the police officers even pulled out a service weapon. According to Fontanka.ru, gas was also applied to the protesters. We wrote about the harsh detentions in St. Petersburg and other cities in a separate article.

The first wave of stocks took place a week earlier, on January 23rd. In many places where it ended with harsh detentions, in this material you can find videos of detentions and confrontation with the police and protesters from different cities of the country. After the rallies, a series of searches and detentions took place among Navalny’s supporters, oppositionists and journalists.