The journalist gave up myopia at -25 and put on artificial lenses. Operation on the first eye took place in Kemerovo: evening view of the city during the “black sky” regime

The correspondent personally felt what it was like to see the light: and not with some -2 or -3, but with a much greater minus. You, most likely, did not even suspect that such a minus exists at all. About the surgeries experienced, feelings during surgery and new vision – in the author’s column of journalist Ilya Kalinin. Warning: it is better not to read the impressionable.

I have been short-sighted since childhood. At some point, he began to wear glasses. Then, when the lenses appeared, the glasses went to the far shelf. The minus was not small, so replacing glasses with thick lenses with weightless lenses was perceived as a miracle. The idea of ​​a vision correction operation often came to mind, but somehow it was not up to that or it seemed like an expensive pleasure.

This continued until the notorious pandemic year. (Now everything is measured in 2020, here I am.) More precisely, I felt the problem a little earlier – in 2019. I suddenly felt that in the usual lenses at -8 it became somehow uncomfortable. I wrote myself a prescription for -8.5, but this did not help for long. Eyesight continued to fall. The problem became very acute by the fall of last year. It became difficult to work even at a computer with enlarged characters.

And then, quite by chance, I learned about an unusual vacancy in the private eye clinic “Omicron”: they were looking for a person for the position of a grandson in the medical center. It was decided to write a note about this, and it turned out to be successful: after the publication of the NGS, not only local, but also federal media wanted to tell about the unusual position.

During the preparation of the article, I learned that operations are done here at a discount: part of the costs allegedly is paid by the state under the compulsory medical insurance. And in order to fully use the limited number of allocated quotas, some of the patients, of whom there were more in Novosibirsk, were taken to Kemerovo. There “Omicron” also has a center with surgeons, and there are more quotas than those willing. At least, this is how the employees of the center explained the trips of Novosibirsk residents to operations in the neighboring region.

At first, I just decided to take the opportunity and have my eyesight checked – I hadn’t gone to an ophthalmologist for a long time. It is difficult to find an ophthalmologist in your clinic, they are like specimens from the Red Data Book: they are extremely rare in budget “forests”, everything is in paid “reserves”. 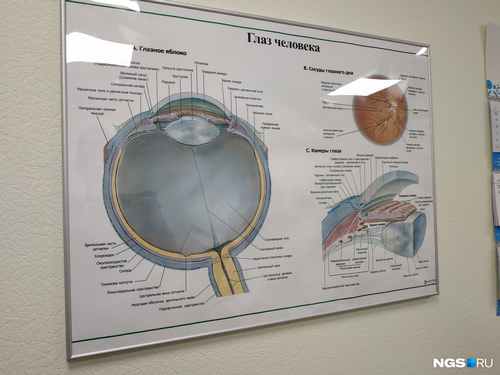 When I checked my eyes on various devices, I was shocked. I suspected that my vision was much lower than the diopters of the lenses I was wearing, but not so much! The right eye is -12, and the left one injured in college is -25. The diagnosis is severe: cataract and the need to put artificial lenses.

Perhaps I would have doubted for a long time whether to have an operation or not, because this would require a round sum at the end of the year, if not for the rumor that the state was going to cancel co-financing. As a result, as soon as I got sick with coronavirus in November, I immediately went to collect a bunch of certificates needed for surgery on my left eye.

Oh-oh-oh, collecting certificates through a budget clinic is another story! I can only say that I still cannot understand why a regular blood test for hepatitis will be done for you within two days for money, but you can get it for free within the framework of the compulsory medical insurance only after 10-14 days. At the same time, the research is done, as the doctors explained, in one laboratory.

In general, at the end of December I was ready for the operation. And on the 24th, early in the morning, together with a group of people like me, went to Kemerovo. A few hours later we were at the local Omicron.

I was lucky: I was one of the first to go to the operating table. It’s easier this way: less fear. Before that, the anesthesiologist talked to me, explaining that they would put an artificial lens in my eye – a convex lens-implant. Aesculapius gazed intently into my eyes and asked sympathetically: maybe an injection? Having learned that from a sedative injection a person becomes inhibited and almost ceases to feel reality, I decided to pass the test for a “sober” head. The operation takes place under local anesthesia: you, of course, do not feel pain at all, but you feel all the touches and the worst thing – you see everything. I recalled the surgery I had in childhood to reduce the drop in vision. The most unpleasant thing was preliminary anesthesia, when, during the injection, the needle crunched under the eyeball.

This time there were no injections in the eye: shortly before the operation, several eye drops were dropped as anesthesia. Then they asked me to undress to my underwear, dress up in a disposable hoodie and a hat – as for a shower. Socks were allowed not to take off, but to put on shoe covers.

The operation was performed by a woman. Maybe that’s why it seemed to me that everything went somehow softer than the second time when a man cut his eye. During the second operation, the surgeon was a little nervous: I moved my head and the eye fell out of the microscope eyepiece. But you try not to move when you physically feel, and even see how the lens is being pressed into the cut eye with almost your feet! (About “ramming with feet”, of course, a joke.) But all the manipulations and the moment when the implant is inserted into the eye, you really feel clearly.

But the first time everything went smoothly. I shrank and broke out in a cold sweat only for a moment, when the surgeon, standing over me, sharply said to the nurse: “It’s not sucked off. Is it clogged? Rinse urgently! ” What it was, I did not specify. After about 15 minutes it was all over. They helped me to get up, and I went into the lobby to wait for the others, so that later in a group I could go to the hotel that had been arranged for us. In the morning, it was supposed to be examined and the way back home. A trip to Kemerovo and back, a night in a hotel with a good dinner and breakfast – all this cost 3 thousand rubles. Operation – 23.5 thousand.

The second eye was already done in the new year and in Novosibirsk. Time faster – 10 minutes, more expensive – 28.5 thousand rubles. Thanks to the state, which, the clinic explained, decided not to extend the co-financing program for compulsory medical insurance. To wait for my turn for a quota in the Novosibirsk MNTK, as I understood, was unrealistic: a pensioner was operated on with me, who had been waiting for a free operation in a state clinic for two years. As a result, I went to the paid one – I was afraid not to wait at all.

After each operation, I still had to go through a special regime: the blindfold was removed the next day, but for a month I had to endure various hardships. You cannot lift weights (more than 3-4 kg), go to the sauna and bathhouse, drink alcohol, work in an incline, strain your eyes with text for more than three hours a day (you can watch a movie) and sleep face down. Yes, and everything else was also forbidden to do face down.

But this is nonsense in comparison with the fact that everything around you is now sharper, the colors are brighter and you already see with your own eyes. Even with the help of such implants. And even nothing that I occasionally notice a halo in the eye (the edges of the lens glare), and objects, when you look into the distance, bifurcate a little (the brain reconfigures, the doctors notice, and this should then disappear).

Now I was thinking: should I be considered a foreign agent? After all, I already look at the world through American lenses.