A new wave of cold is awaiting Novosibirsk one of these days, but even if the weather is favorable, some mountains still freeze in their apartments. A resident of Novosibirsk fights with housing department because of too cold apartment

Thirty degrees of frost is approaching Novosibirsk – forecasters warn that at night the temperature can drop to -35 degrees. Some townspeople await such bad weather with horror. Even with more comfortable weather, their apartments do not warm up above +16 degrees, as, for example, at the medical lawyer Yulia Kazantseva.

The Siberian woman told how she survives with two children at such a temperature and how much money she pays for heating with electricity. We publish her story.

The problem with heat in my apartment on Vystavochnaya Street began in the fall – from the very beginning of the heating season. Since November, my two children and I have been living with heaters, which we turn on every day. Since then, the average temperature in the apartment has not exceeded 20 degrees. The minimum was 12 degrees. We have a ninth floor and a corner apartment, in which the temperature must be at least 22 degrees. 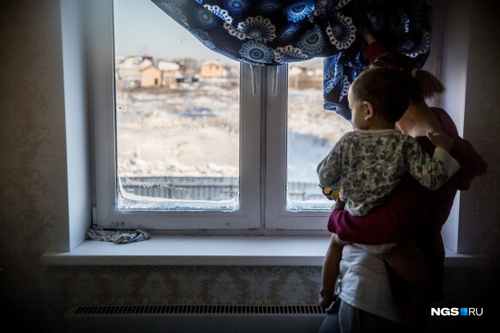 Constant complaints to housing department no. 18 do not help. During the January frosts, I saw applications with a complaint about the cold in apartments not only from our house. The woman on duty said that she had more than 25 applications from people who are freezing. I looked at the magazine – residents of Novosibirsk, like me, wrote about temperatures of 15 and 16 degrees.

I managed to call specialists only once, although I asked about it every time. As a result, a single act was drawn up. An engineer came and wrote that the room was +20 degrees, although in fact it was +16 degrees.

Earlier, in December, a locksmith came and said: “You need to change batteries and plastic windows.” As if the housing department had nothing to do with it. It turns out I need to change the new batteries that I installed three years ago and the nice windows. It’s gotten ridiculous this year. I glued the plastic windows, because at -40 degrees I had ice due to the lack of heating. Everything began to freeze and freeze. This has never happened.

And if we compare the payment for electricity, then last year in January it took me 600 rubles, and now – 1600 rubles. This is due to the constantly running heaters. And I know that some grandmothers save energy and get cold. Not everyone can pay that amount. I do not limit myself, but even then I cannot afford to heat every room. We sleep with three children in one room.

At home we wear warm suits and sleep in them under two blankets. And this is with heaters. I can’t imagine how you can sleep at 12 degrees. Simply inhuman conditions. From April to September, I lived with my children in a country house and paid 6 thousand for electricity there, and we don’t have a stove there, only heaters. It turned out three times cheaper than in an apartment where I have to pay both for heating and be warmed by two heaters.

Move back to the dacha?

Since November I have been living in an apartment and freezing. In January frosts, children generally slept in hats. Like homeless people on the heating main. Due to my health, I should not be hypothermic, because an exacerbation of my disease may begin. His treatment costs me 50 thousand rubles a month.

It remains a mystery to me why this year there were such problems with heating in my house and in my neighbors. The housing department insists that the parameters are reduced by the CHP, the power engineers are sent back to the housing department. After the last complaint the other day normal heating appeared in only one room. It turns out that the parameters are still normal and the problems lie in the communications of the house, which are not properly maintained? We’ll have to figure it out further and spend a huge amount of nerves.

How many complaints and papers do you still need to write in order to get warm again in the apartment? Every year, the cost of heating and maintenance of a house only grows, and in a very tangible amount, and the quality of life only decreases.

New strains of COVID-19 imported to Russia from Turkey