A resident of Novosibirsk demands from Skillbox to terminate a loan for 140 thousand. A mother of three children was ready to shell out more than a hundred thousand rubles for a new profession and the prospect of working remotely on the Internet.

A Siberian woman accidentally took out a loan of 180 thousand rubles to study to become a specialist in social networks. The woman claims that she thought it was an installment plan, which you can refuse at any time. When she realized that now she would definitely have to pay for the education, but this time to the bank and with interest, she decided to return the money.

The Skillbox company first stated that they were ready to return only 30%, despite the fact that the resident of Novosibirsk practically did not use the online course. The NGS correspondent talked to the Siberian woman, studied the conditions of the company and asked a lawyer what to do if you changed your mind about studying, and the money had already been paid.

“I myself do not know what came over me”

Julia has three children, and in order not to be distracted from her family, she decided to get a popular profession and work remotely.

– I foolishly left my contact information on the Skillbox training service. A young man called me, introduced himself, started a conversation about their training platform. I didn’t even have time to blink when he signed me up for an online course worth 180 thousand rubles, on credit. I myself don’t know what came over me. The manager said that it would not be a loan, but an installment plan. I thought – I will not like it, I will stop paying and that’s it. But it turned out that this is a loan, – says Yulia, a reader of the NGS. – The manager arranged everything himself. I only needed to say the code from the SMS message.

The woman provided the editorial office with confirming bank documents. The cost of the course is 141 thousand rubles, and together with interest for three years she had to pay the bank almost 180 thousand. At the same time, Julia has not yet received a contract for the provision of services, although she was given access to the resource. 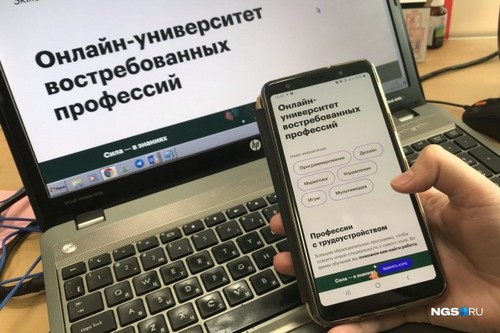 – I went to see what they sold me? And they sold me a course from the video for 5-15 minutes. I watched a few videos, I think it’s some kind of nonsense. I rushed to figure out how to cancel this purchase of a training course, and in the end they told me and in the offer it was written that after completing the training from 0 to 30% Skillbox would return only 30% of the course cost to the bank, and keep the rest, 70%, for itself, – says Siberian.

“We will refund the money”

The Skillbox company, in response to an official request from the NHS, explained that people apply for loans on their own – without any pressure from their employees.

– In this case, the student decided to apply for a loan through a bank. The agreement can be terminated at any time by the student, – says Skillbox – If the student studied and changed his mind, we will refund the money. Even if the material has not been used.

When asked why they are ready to return only 30% of the cost of the course, the company did not answer.

Lawyer Konstantin Zinoviev explained that the client has the right to return the money.

– Here we are talking about a contract for the provision of services. And according to the Civil Code, the contract can be terminated unilaterally at the request of the customer. But it is obligatory to pay for those services that have already been provided. You need to write a statement. If the company does not want to voluntarily terminate the contract, then it will need to go to court with a claim, – the lawyer advises.

After the editors asked Skillbox for comments, the company’s manager contacted Julia and promised that the money would be returned in full in 12 working days.

In early February, the NGS told how a resident of Novosibirsk suffered from the actions of telephone scammers, who issued a loan for her for 500 thousand, and then withdrew all the money from the account. Here is a diagram of how it happened (now the bank refuses to cancel the operation).

The insulin problems are not over. As the Ministry of Health explains Is it worth paying tuition fees? Overview of private schools in Novosibirsk