A veteran from Kyrgyzstan received 10 boxes of Novosibirsk sweets as a gift. Nonna Oskolkova, a resident of Bishkek, is 95 years old. Recently she became a member of the Veteran’s Dream charity project – photos, stories and dreams of the wind are published on a special website , and those who have the opportunity make these desires a reality.

A relative of Nonna Andreevna wrote that the pensioner wants to get “Bird’s milk” candies, which are produced in Novosibirsk, and “grandmother’s iPhone”. As a result, several boxes of sweets were sent to her.

The NGS talked to the veteran’s granddaughter Marina Dzhaparova and found out why she wanted to get these particular sweets.

Nonna Andreevna was born in 1925 in the Udmurt village of Sarapul. The family had five more children, she was the eldest. Mother worked as a seamstress, father was engaged in trade. When the famine began in 1930, the family moved to Kyrgyzstan.

– My grandmother studied at a technical school, became an accountant. She worked in her specialty in the branch of the state bank in the village of Ananyevo, then in Cholpon-Ata. She worked for almost 39 years, then worked part-time in retirement. All my life has been associated with numbers. Even now, when he receives a pension, he writes to the parish, remembers everything, controls. He counts money so that no one is around – apparently, a banking habit, – said the granddaughter.

When the war began, Nonna Andreevna was 16 years old, she worked in the rear – on the collective farm she was preparing food for the front. As Marina said, her grandmother had to work until she had blisters on her hands. After the war, Nonna Andreevna got married, she had two daughters – in 1950 and 1960.

Nonna Andreevna’s granddaughter wrote about the Veteran’s Dream project. She spoke about the biography of her grandmother and her dream – “Bird’s milk” sweets from Novosibirsk and “grandmother’s iPhone”.

– This is a combination of factors. Sweets from Russia were in demand in the post-Soviet space. Probably the closest factory was in Novosibirsk. At one time I worked in Russia, and when I came, I brought Novosibirsk chocolates to my grandmother. When her youngest daughter lived there and gave birth to her first granddaughter, her grandmother flew there. And I also probably tried these sweets. They were popular, perhaps that influenced it. And when we want something tasty and high quality, we think about a Russian manufacturer. We, in Bishkek, do not have something like that. And the grandmother loves both the Bird’s milk cake and these sweets, – explained the granddaughter. 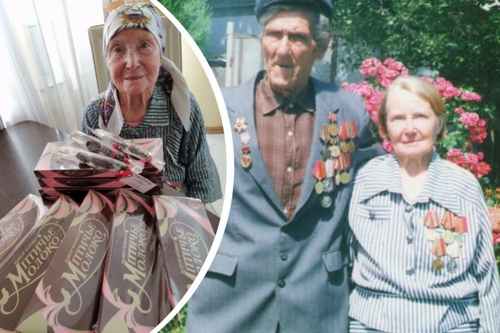 The Veteran’s Dream website says that Nonna Andreevna thanks everyone for the gifts and wishes them good health.

Last year, the NGS published a series of articles “Frontline Instagram”, in which he told stories about the exploits of the inhabitants of the Novosibirsk region during the Great Patriotic War. One of the heroes of the column was Pavel Polishchuk, who now lives in the Pervomaisky district. He was 19 years old when the war ended, but the soldier was immediately sent to fight the Japanese.