In Novosibirsk, snow from the roof of a cafe crushed the roofs and windows of two cars. Now the cars need serious expensive repairs

On Saturday, February 6, in the Zaeltsovsky district, snow fell from the roof of a cafe onto two cars parked nearby and crushed the windshields and roofs.

The incident took place near the Sunny Day cafe on Kholodilnaya street. Yulia M. with the young man left the car near the building. According to the girl, when they arrived, the parking space was cleared and not fenced.

– Snow from the roof fell on two cars, ours and one more visitors. We saw the snow already lying on the car, and the owners of the other were sitting near the window and saw how the snow flew by, and looking out, saw that it fell on the cars. Before that, there were three of them, but one left and ours remained. About 40 minutes later, another batch of snow fell on the cars. After that, our car drove all over, the blow fell on the windshield and the roof, even the rear trunk was bent. And the car is new, only three months old. 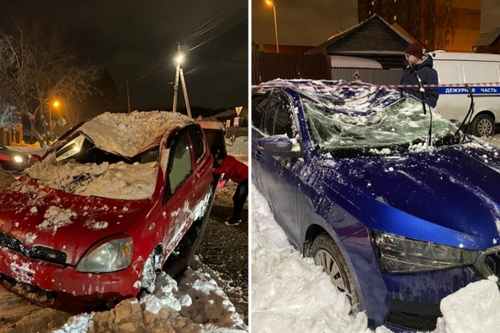 According to Yulia, after the snow fell, the owner of the building came and told the employees to urgently fence off the place with tape and shovels to clear the snow, supposedly it was just a footpath and people parked illegally.

– We called the police and the district police officer, the officers arrived, examined the cars, drew up a protocol. Today we went to the police, took the ticket. While we were still standing and waiting there, near the cafe, a piece of snow fell on the head of one emerging man, a small blessing, but still. The owner of the building and cafe refuses to admit his guilt, is ready to go to court. We ourselves are thinking of going to court if the situation is not resolved otherwise, – said Yulia M.

The NGS correspondent could not get a prompt comment on the situation from the administration of the institution and sent a request to the “Sunny Day” cafe chain.

What to do if snow falls on your car from the roof of a building and damages it?

First of all, of course, it is important to follow the parking rules. And if you did everything right, then you need to proceed as follows:

1. It is necessary to call the police – employees will record the damage to the car, draw up a protocol. If you have a CASCO policy, then you need to contact the insurance company and confirm the existence of an insured event, and it will pay for the repair of the car and collect money from the culprit in its favor.

2. It is imperative to photograph the car and the damage itself several times so that the essence of what happened and the scene of the action are clear (the picture should contain a house, its number and other distinctive signs of the area).

3. Understand who exactly is responsible for removing snow and ice on the roof of a particular house – a management company, a homeowners’ association, or some other organization? And it is advisable to immediately find a responsible person in order to show him the general picture for clarity.

4. Organize an assessment of the damage caused to the car by independent and qualified experts.

5. If the guilty party refuses to pay, you must send it a written claim and wait 20 days, and if there is no positive answer, then go to court with a claim.