Heading “Where are you driving?” today he is analyzing an accident that occurred due to the carelessness of one driver and, probably, the stubbornness of the other. A KIA Rio taxi and a Subaru passenger car collided, the driver of the last car had every opportunity to brake and not crash into the offender, but continued to move.

The intersection of the Gusinobrodskoye highway with an exit from the shopping center “Druzhba” (the area of ​​the hypermarket “Lenta”). Subaru with a DVR drives onto the highway under its own green light, from the opposite direction (a separate section of Volochaevskaya Street), cars make a left turn. Here KIA Rio taxi turns – the Subaru driver does not change direction, does not brake and crashes right into the Korean sedan, watch the video.

Officially. According to the head of the propaganda department of the State Traffic Safety Inspectorate for the Novosibirsk region, Sergei Stradymov, on January 26 at 19:55 in the Oktyabrsky district of Novosibirsk at 64 Gusinobrodskoe highway, a collision of Kia and Subaru cars took place. Recorded as collision with property damage, no casualties.

Of course, the taxi driver is formally to blame; when turning, he should have let oncoming cars pass. But the “subarist” could take some measures to prevent road accidents – the visibility was normal, the speeds were low. Recall that Russian traffic rules directly oblige drivers to try to avoid a collision in any situation.

Clause 13.4 of the SDA. When turning left or making a U-turn at a green traffic light, the driver of a trackless vehicle must give way to vehicles moving from the opposite direction straight or to the right. 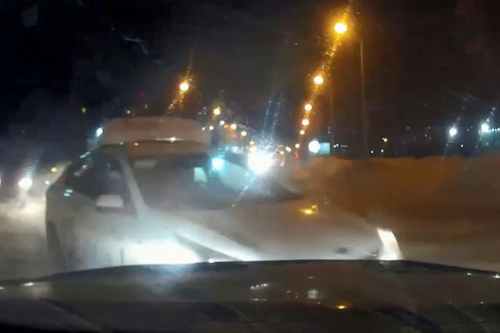 Clause 10.1 of the SDA. If a traffic hazard arises, which the driver is able to detect, he must take possible measures to reduce the speed until the vehicle stops.

The result of the analysis in the traffic police is obvious here – all the blame will be placed on the taxi driver, and rightly so. The Subaru driver can simply declare that he did not see the danger, could not detect it – that’s all. And nevertheless, in such situations it is better not to bring the matter to a collision – well, you see that the violator is being substituted for you, well, slow down, if there is such a possibility. Of course, if you are not a “teacher on the road”.