The three-year-old dog was in Kurgan, but the owners decided to change their place of residence and could not take him with them, so they began to look for a new owner for him. The dog was sent by train – he rode for 24 hours in the same compartment with the conductor. The ride went well, however something went wrong on arrival and the new owner left him at the train station. There he spent two days, until they found overexposure for him on social networks.

Alyona Sivtsova from Siberia agreed to take the dog for a while. She calls herself a dog lover – three dogs live in her house. Alena told the NGS how Thunder (the dog’s nickname) feels and what fate awaits him.

– That woman told everyone initially that he twisted and ran away, that she was looking for him. However, the conductor denied this, it was possible to contact her. She said that the meeting side immediately behaved rudely. When she took him off the train, she pulled him off the car, remember how high there is? The dog, of course, does not know this woman, then he is abruptly pulled, grabbed, put on a leash, he growled at her, pulled the leash. After that, she decided that he was aggressive, unhooked the leash and threw it there. Thunder rode with a guide, during the trip the dog was relaxed, calm, although it did not know the person. I can’t imagine what could have happened to him in two days, while he was at the station, that he became like that. I really feel sorry for him, he is so unhappy now … I’m trying to find at least some kind of contact with him. 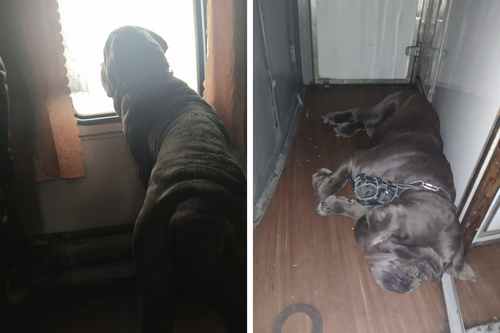 Despite the psychological trauma received, there is hope that everything will work out. The interlocutor noted that the dog has an excellent appetite, and this is already a good sign:

– Thunder has a good appetite, eats everything I give, but he is very afraid of me. She is not so afraid of her husband – apparently, the hostess did not favor the guy. And I just come up – he is hiding. Thunder is not quite running, but his condition leaves much to be desired: he does not even have a single vaccine.

Alena also spoke about the future of Thunder:

– Now we have him on overexposure, until he comes to his senses and he will not pick up the owners. He is in deep stress, does not let him near him at all. Hopefully it will thaw out in 2-3 weeks. While Thunder is still in shock. Pedigree breeders from Moscow will be looking for new owners for him. This is a group to help certain dog breeds. In Novosibirsk there is a group to help Alabai, staff and pit bulls, huskies, but mastinos and molossians are not, so they are supervised by a Moscow group. Now they provide Grom in full: they bought us a large supply of food, all the necessary medicines, paid for a doctor’s appointment and vitamins.

We tried to contact Yulia, but she did not get in touch. In the correspondence in the group on the VKontakte social network, she explains her refusal in the following way:

– At home I have five adult dogs, Mastino Neapolitano. One of them is five months old. Seeing how he (Thunder. – Ed.) Rushed at me, I’m sorry, I’m just afraid to take him home. I was told that this is a kind, socialized dog. But there is not much room in my house.