The details of the stabbing fight that took place this afternoon, February 16, at the gates of the NSTU became known. One of the participants died in an ambulance. Later, NSTU students began to send each other a post on the VKontakte social network, which was published from the page of a university student Denis Miller.

In this post, the young man confesses to the murder of a classmate and explains the motives for his action. We talked with eyewitnesses to the tragedy, friends of Denis and studied his note.

What happened near NSTU

As one of the university students told the NGS journalist, the young man was stabbed to death with an object that looked like a knife:

– From the window of the sixth building of the NSTU, I saw the Russian Guard and the ambulance. We went out with a classmate, the place was already fenced off with tape. There was blood in the snow, a hat was immediately lying around and an object that looked like a knife was visible. We asked what happened. We were told: “There was a scuffle, the reason is not known,” said Vlad, one of the students.

According to another eyewitness, there was a young girl near the deceased boy. All three – the attacker, the girl and the deceased – were familiar and “judging by the fact that the detainee had a backpack” by students.

– The injured young man was lying on his side, unconscious, next to him was a girl in a state of shock. She sobbed, held his hand, stroked. I tried to do something. The suspect was being held by Rosgvardia officers. As I understand it, the guy was first caught by the utility workers. Employees of the National Guard have already said that the guy is unconscious, and may not be a tenant. The second lay in handcuffs and smiled. When they were taking him away, the girl of the murdered man shouted in the trail: “The creature.” After about 10 minutes, the intensive care unit arrived, – said an eyewitness.

In the evening, university students began sending each other a post from the VKontakte social network, in which a certain Denis Miller confesses to the murder of a classmate.

– If this post ended up on my wall, it means that I still stabbed my classmate, a rat, and at the moment either suicidal, or gave ***** (escaped. – Ed.), Or was accepted by officers – wrote the young man on his wall. The post was published using a timer, Denis Miller himself logged into the social network for the last time this morning. 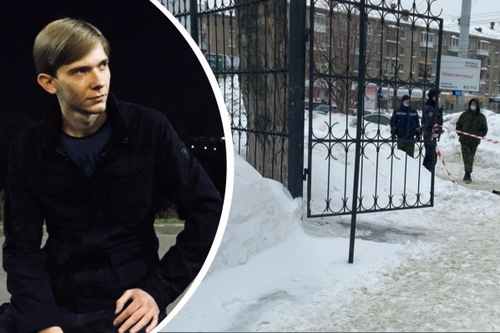 In his post, he mentions that his ex-girlfriend left for this guy.

– I killed this fool not because he “took the woman away” – this is, in essence, secondary. The fact is that I was incredibly enraged and haunted by his position in the spirit: “I was like you, and I hate myself for that. I have the honor. ” He had no idea not only about who I was, but also about the essence of such a phenomenon as “honor”, – wrote Denis.

One of Denis’s close acquaintances told the NGS correspondent that he once mentioned in a conversation about the deceased guy:

– I know Denis from school, I heard about the person in the post from him, but I did not think that it would all end this way. He told me in December that he was dating a girl several years younger than him. During the year everything was fine with them, and somewhere in November a young man appeared, about whom he wrote in a post. In my opinion, his classmate or just a dude from the parallel. For some time they all talked together, it seems like she met this boy through Denis. Closer to November, this girl decided that she would no longer communicate with Denis and would communicate with this boy. Apparently Denis didn’t like it. The whole situation is shocking, because the person behaved quite adequately, and explained this situation adequately. I don’t understand how it happened.

One of Denis Miller’s former classmates said that he was a “good guy” at school. Another classmate of Miller called him “weird, aloof and not particularly sociable.” Several more of Denis’s acquaintances refused to talk about the situation, and one of his friends said that he did not know if what was written in the post was true.

Was he a teacher?

In his post, Denis Miller also wrote an appeal to students:

– To all my students: you are handsome, gnaw the granite of science and you can drill the heavens.

Because of this phrase, social networks began to discuss that Denis Miller could teach at the university. An acquaintance of the young man in a conversation with the NGS clarified that Denis Miller conducted “something in psychology” at NSTU in practice.

As the press secretary of NSTU Yuri Lobanov explained, a man named Denis Miller was not enrolled in the university as a teacher:

“Theoretically, he could have appeared in the classroom with some acquaintance of the teacher, made a presentation there, but this does not mean that he is a teacher himself,” explained Yuri Lobanov.

On the NSTU website, a student named Denis Miller is on the list of applicants for a master’s program in the profile of Social and Organizational Psychology. The young man entered the summer of 2020 – he was enrolled on July 31.

The press service of the Main Directorate of the Ministry of Internal Affairs and the Investigative Committee for the region promised to comment on the incident later. The connection of the post on the social network with the murder was also not confirmed, but also not denied. Instead of fitness: three ski slopes within the city

Military unfinished construction in Berdsk decided to sell for 60 million