In Novosibirsk, officials continue to be arrested and fired in the Chumanov case. In addition to Mikhail Chumanov , the head of the Novosibirsk TUAD, Deputy Transport Minister Sergei Stavitsky and Director of Novosibirskavtodor OJSC Sergei Ilyushin are involved in the bribery case.

The high-profile case of Mikhail Chumanov, the chief road builder of the Novosibirsk region, who was detained for bribes, continues to acquire details. A week and a half ago, the Deputy Minister of Transport and Roads of the region, Sergei Stavitsky, was arrested, and at the beginning of this week, within the framework of the same Chumanov case, several employees of the TUAD and the ministry lost their positions at once.

The NGS tells the chronology of the criminal case, the investigation of which is still ongoing, which means that new persons may soon appear.

How the head of TUAD was detained

Mikhail Chumanov came under criminal prosecution on December 23, 2020. He was detained in his cottage in the suburban village “Evropeyskiy” – at that time searches took place in the office and at his house. As reported in the West Siberian Investigative Department of Transport, the reason for the detention of the head of the TUAD was “the facts of committing corruption crimes” for a total of 5.1 million rubles.

According to the investigation, the head of the department received a bribe from representatives of commercial organizations. For this money, the official promised the road companies his patronage, namely: assistance in obtaining tenders and accepting work under a state contract (repair, reconstruction, construction and maintenance of regional highways).

We have depicted the arrests and connections between the persons involved in the high-profile bribery case in the form of a diagram. Now five have been detained, two have been dismissed, three have been brought to disciplinary responsibility, and another official is being checked. 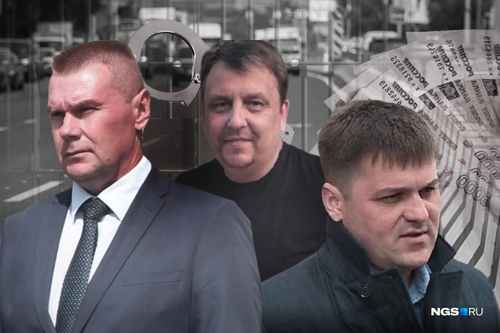 Together with Mikhail Chumanov, Igor Listopad was also detained – this is the road builder’s brother. According to Kontur.Fokus, Igor Listopad is an individual entrepreneur, engaged in renting and real estate management. According to the information of the Investigative Committee, he acted as an intermediary in receiving bribes.

The international anti-corruption portal linked two commercial organizations with Mikhail Chumanov – Bastion LLC and Soyuzdorstroy LLC. They, according to the portal, gave bribes to the road builder.

The first company (type of activity – the construction of bridges and tunnels) is unprofitable: at the end of 2019, Bastion’s revenue amounted to 132.7 million rubles, and losses – 328.4 million. There is information that since 2019, the company’s creditors have planned to go to court at least 6 times and achieve bankruptcy.

Both Soyuzdorstroy and Bastion regularly received contracts from TUAD.

Currently, all four defendants remain in custody. At the end of February, the Zheleznodorozhny District Court extended the measure of restraint for Igor Listopad and Mikhail Chumanov – they will remain in custody until at least May 26.

What is known about Mikhail Chumanov

The region’s chief road builder came to TUAD after working for Gazproneft (Deputy General Director for Development) in February 2018. His average monthly salary during his work in the department increased by about 30 thousand rubles and in 2020 amounted to 183 thousand rubles.

Three months after the arrest of the head of the road department, the security forces arrested Sergei Stavitsky, Deputy Minister of Transport and Roads of the Novosibirsk Region. As it turned out, the official was directly related to Mikhail Chumanov – it was to him, according to the investigation, that he offered his patronage. The deputy minister promised the road builder maximum allowances and additional payments to wages.

Already smaller amounts appear here: from October 2019 to December 2020, Mikhail Chumanov gave bribes worth 1.5 million rubles to Sergei Stavitsky. Investigators came with searches to work and home to Stavtsikom, where they found wads of money on him.

An employee of the ministry has now been detained, a criminal case has been opened against him under Part 6 of Article 290 of the Criminal Code of the Russian Federation (taking a bribe on an especially large scale). The term of his detention is until 26 May. However, the official has already appealed against his arrest.

This week, the Chumanov case again made itself felt – several more people from among the employees of TUAD and the Ministry of Transport fell under the distribution.

– For violations committed in the work, 2 employees of the GKU NSO “Territorial Administration of Highways of the Novosibirsk Region” were dismissed, 3 employees were brought to disciplinary responsibility, the head of the Department of Roads of the Ministry of Transport and Roads of the Novosibirsk Region was also dismissed, – told the NGS correspondent in the West Siberian STD SK of Russia.

In the initial release of the Investigative Committee, Sergey Epov was mentioned – the allegedly fired head of the road management department of the Ministry of Transport. However, he told the NHS that he left of his own free will. Later, the investigators said that they really made a mistake in their commentary, but the work of Sergei Epov in the criminal case is still being checked.

Investigators have a lot of work ahead of them: they will check all the objects that the companies that paid bribes to Chumanov were involved in.

As it became known last week, the security forces are conducting a check against the deputy and member of United Russia Alexander Barsukov – he is suspected of fraud with land plots. We can talk about fraud on an especially large scale when buying and then selling 45 plots in the regional center of Kolyvan. The deal was made about 10 years ago, at that time Alexander Barsukov was the general director of the road construction company Novosibirskagropromdorstroy. He heads it to this day. In just 16 years, Novosibirskagropromdorstroy has received 532 government orders for a total of over 7 billion rubles. The deputy’s company signed the last major government contracts with the scandalous Territorial Administration of Highways of the Novosibirsk Region.