On Tuesday, February 2, the syndicate-100 association of independent Russian media, which includes the Novosibirsk website Taiga.info, issued a demand to the heads of the Ministry of Internal Affairs and the National Guard to immediately stop the persecution of media workers performing their work.

One of the reasons was the incident with the journalist of the NGS Alena Istomina – at an uncoordinated rally in support of Alexei Navalny in Novosibirsk on January 31, one of the security officials hit her on the phone with a truncheon.

– Dozens of our colleagues were detained by law enforcement officers while performing their professional duties. They used physical force against the journalists: a riot police officer hit Novaya Gazeta’s correspondent Elizaveta Kirpanova with a truncheon on the head, Meduza’s correspondent Kristina Safonova was hit with a truncheon several times, and Alyona Istomina’s phone from Ngs.ru was hit on the phone during the shooting. There are cases of beatings of journalists during the arrest and even the use of an electric shock gun, – the text of the demand is quoted by Taiga.info. 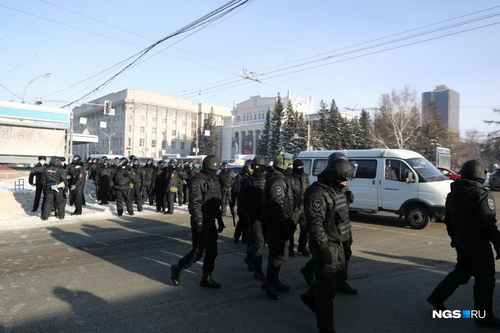 Syndicate-100 reminded the employees of Rosgvardia and the Ministry of Internal Affairs that the law “On Mass Media” specifies the right of a journalist to attend mass events. However, many were detained during uncoordinated actions. In addition, journalists of the publications that are part of the association continue to face opposition from law enforcement agencies – the trade union of journalists recorded 180 cases of violations of the rights of media workers on January 23 and 31.

– And this practice continues – today again on the streets of Moscow, journalists are detained, despite the identification vests “Press”, the presence of editorial certificates and editorial assignments. Such actions are a violation of the law and fall under Article 144 of the Criminal Code “Obstruction of the legitimate professional activities of a journalist” through the use of official position. We demand compliance with the law and the immediate release of all journalists detained while covering the protests. The pressure of the authorities on the media is unacceptable, the demand says.