Minibuses push to the right of the stop. Miss? This incident happened on February 8 in Chelyabinsk. Opinions about the provocateur of the quarrel diverged even within our editorial office: watch the video and write in the comments what do you think?

“Lada” was turning left through the tram tracks, bypassing the line of minibuses that had got up, when it began to turn out a groove from its middle. “Lada” had to dodge, and in revenge her driver slowed down the bus, which, apparently, caused the opponent’s aggression. And he demonstrated a driving style that falls under the definition of “dangerous driving” in the traffic rules.

The minibus overtook the opponent at the intersection of Gorky and Pervaya Pyatiletka streets, started a skirmish and, judging by his gestures, threatened to beat him.

But who was the initiator of the conflict? In general, the rules require motorists to give way to bus drivers: recall the exact wording from the traffic rules.

Clause 18.3 of the SDA. In settlements, drivers must give way to trolleybuses and buses starting from the designated stopping point. Trolleybus and bus drivers can only start driving after they are sure that they are given way. 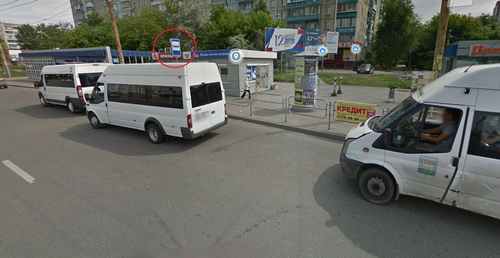 But first, another question: is such a groove a bus from the point of view of traffic rules? Auto expert Yuriy Panchenko notes that although the term “minibus” has taken root among the people, this concept is not legally significant. Paziki, as in the video, belong to full-fledged shuttle buses and have equal rights with them.

“If the car belongs to a company that has a contract with the city administration to service the route with clearly marked stops, the groove is considered exactly the same bus,” the lawyer says. – And other drivers have a duty to release him from stops. And it doesn’t matter at all that the bus is trying to get into the left lane if, for example, there is an emergency car in the right lane. Drivers are still obliged to let him pass.

But, the expert emphasizes, in order to gain an advantage, the bus must stop exactly at the bus stop, and not just somewhere nearby.

A typical situation: minibuses get up at the bus stop at random. Pay attention to the sign “Bus stop”. According to traffic rules, you only need to skip the first minibus

– How should car drivers guess whether there is a stop here or not? – asks Yuri Panchenko. – For this there is a sign “Stop of route transport”, which is placed at the beginning of the landing site. To keep it visible, the bus driver has a duty to stand so that the tailgate of the car fits behind the sign. If the minibus simply stood somewhere in front of the stop, all the more far from the edge of the sidewalk, there is no obligation to let him pass when changing lanes to the left.

Judging by the video, the groove did not even disembark passengers, but simply got stuck behind the bus, not driving close to the bus stop and therefore having no priority. In addition, the drivers, in principle, did not see the sign “Bus stop” because of the crowd of minibuses themselves.

The minibus stands with an offset relative to the bus in front: it looks like the hero of the video did not approach the stop

But an attempt to “teach” a bus on a snow-covered road does not look like a consequence of high intelligence: a sudden stop of the “Lada” could provoke a chain reaction and injury to the passengers of the groove – they are vulnerable to sudden braking.

Subsequent actions of the minibus also do not honor the driver of public transport. By the way, the short-term “truce” in the middle of the video was caused, apparently, only by the stop of the minibus for the sake of disembarking passengers outside the stop.