Svetlana Krestinina only regrets that she did not take Kirill earlier. The Krestinin family was the most ordinary – a house, a job, two children, until the couple had 8-month-old Kirill, who turned everything upside down.

The couple decided to adopt a child, but they were completely unaware that the baby would be terminally ill – one diagnosis is worse than the other. The whole life of the Krestinins turned into a struggle to get Kirill one step closer to independence, but full recovery is no longer possible.

Over time, they learned to live without giving up and bravely enduring all the trials, and 6 years ago Svetlana gave birth to twin boys.

– I have been asked hundreds of times why we decided to adopt a child. Each gave his own explanation for our action – it is impossible to have one of our own, health problems, they pay a lot of money for children, saw the advertisement and regretted it. The truthful answer did not suit anyone – at some point I caught myself thinking that I really want another baby – I was just bursting with feelings of love and tenderness that I wanted to share.

I saw an ad on the Internet about the recruitment of adoptive parents to the school – I was hooked, I wanted to know more. When I looked at the photographs of children, the thought crept into my head: why not take a baby into my family, who is already alone in the world, and then we will give birth to our own, or we will do everything at the same time – there will be twins. 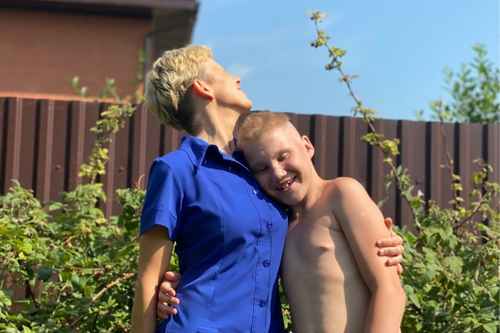 The idea seemed unexpected and strange to my husband, but after discussing it, we decided: we will enroll in school, go once, not ours – we will leave, but we will continue to live in peace.

– After the first lesson, we decided to continue our studies, explained to the older children how we will have another child in our family – they were in favor. The daughter at that time was 6 years old, the son – 4 years old. We did not look at children in the databases, but we agreed that we would look for a girl of 2–3 years old without any special health and status problems for adoption – guardianship or a foster family was not suitable for us.

– My husband and I went on a business trip and did not plan at all during this period to search for children. They caught a glimpse of our future son when they came to the hospital on business. I already understood that I would not be able to watch other children. No pity, no desire to save and help, I did not feel anything then – only the feeling that this was my destiny. My husband said that if we leave now, the boy will be left alone – no one will take him. We were 500 kilometers from home, found a guardianship agency in this godforsaken place, where we were offered profiles of other, more promising children, but we were determined.

When we met with Kirill, we were told in sufficient detail about his state of health – he was fully examined, and according to the documents at that time there was nothing critical. I remember holding an 8-month-old baby in my arms, he can neither sit nor hold his head, no reactions. The doctor says: “He is only slightly behind, he will quickly catch up at home.”

– Cyril did not look sick, but just a frightened child, and we were determined to surround him with love and care, not at all doubting that he would quickly catch up with his peers at home. The problems appeared on the way home, and the degree of their severity became clear within the first month of staying at home.

Kirill had a developmental delay in the development of motor skills, anemia, disturbances in the digestive tract, out of the blue, the temperature rose to 40–41. The child had a strange odor, sweated a lot, all sorts of skin rashes – small punctuates, it did not look like diathesis. Doctors at the clinic listened skeptically to all complaints, prescribed standard tests, and offered to get vaccinated as soon as possible. Nobody sounded the alarm.

– Three weeks later, we got to the first appointment with a neurologist – the verdict was not particularly terrible: the delay, natural in children from the system, and the corresponding appointments. This calmed me down a bit. The rehabilitation doctor and massage therapist was the first to say that everything is very serious, and named the presumptive diagnosis – cerebral palsy.

The child did not react to anything. Cyril’s typical pose is to push off with his hands and scream. He could not stand any touch, even clothes, until he was 6 years old he was almost always at home naked, and even about hugs and kisses there was no talk – heart-rending screams, hysteria, headbutting for any interaction. I waited and approached with millimeter steps, so that he began to allow him to touch him.

– I had to make a decision to leave work 2 months after adoption, as the child required round-the-clock care and rehabilitation. At the age of 1.5, there was the first commission to establish disability. Our son has changed several diagnoses, the final one was made at his 11 years old – a complex chromosomal pathology (Kirill lacks 75 genes) – this is a random mutation that is not inherited.

– Now the boy is 12 years old. He is a comfortable child to communicate – he only had a speech when he was 8 years old. He can serve himself in everyday life. Of the difficulties – Kirill does not orientate himself in space, does not communicate with strangers, is anxious in unfamiliar situations, extinguishes them with stigmata (bleeding wounds on the body that can cause pain and suffering to the wearer – Ed.) – I don’t know if we can do it overcome, but we are working on it. Right now we are reaping the fruits of our many years of work in working on its socialization – and I can say: what was, and what is now – heaven and earth.

– From the age of 5, we do not receive treatment in the usual sense of the word (pills, injections, hospitals), we rehabilitate and try to instill in the child the maximum number of skills, adaptive behavior in society, educate him, go in for professional sports (swimming). Kirill is a Paralympic champion. The path was not very easy – my son was afraid of water, noises and smells, people and much more – autistic mothers will understand me. Today Kirill has 5 workouts per week in 2 swimming pools, he is a team member and has friends, a coach for him is a significant person and indisputable authority. Kirill performs a lot and successfully in competitions, studies at the school of the Olympic reserve.

– By the age of 10, through persistent training and practice, we brought his behavior to socially acceptable forms, and I learned not to react to the words of others. It is difficult to live an ordinary human life, but now a lot is changing, more and more often there are people who are tolerant of people nearby, the attitude of specialists is changing.

The plans include the complete mastering of all everyday self-service skills and a few simple labor skills – so that in adulthood he could be useful and, possibly, find a job. Forecast – in social terms, Kirill will not be able to live independently, he needs a guardian nearby for life. Cyril is a very serious disabled person, his life is limited.

– With the advent of Cyril, I completely rethought my life, other values ​​appeared. Of course, there was a period of denial – I was sure that I would remove all diagnoses, that I would cure, teach, it would become normal. Closer to the age of 8, the understanding began to come that everything was not so simple and that something would not be possible to implement. After 11 years, the final acceptance of the diagnosis came, it became easier, we just try to live a normal life and be happy in every moment of it.

For me, my life is a pleasure to do something for people close to you, to see their successes and to be a part of their life. I am very grateful to my husband for the fact that he, knowing me already in all the nuances, continues to sincerely admire me, our children and do everything in his power to make us feel his care and support.

– I definitely allocate time for myself every day, in the first half of the day, when the younger ones are in kindergarten and the older ones are at school – this fills me with energy and allows me to reboot. I read a lot, have hobbies, and have a wide social circle. I go in for fitness – I allocate three hours a week for this, it was not easy to start, but over time I got involved – my internal state changed dramatically and a lot of resources appeared for new dreams and beginnings.

Is it possible to drink tap water in Novosibirsk?