In the new issue of the column “Where are you driving?” another collision of a motorcyclist with a motorist, it happened on Bolshevik street at high speeds. By a miracle, according to the traffic police report, the biker was not seriously injured, the incident was framed as a collision with material damage.

We look at what driving in the aisle leads to and who is humanly to blame.

Bolshevik, the stream moves from the center towards the Inya junction, the biker’s camera captures fast driving, lane changes, movement in the aisle between two cars. Here are two more cars passing side by side in adjacent lanes. The motorcycle starts to pass between them, but then the white Toyota Corolla in the left lane begins to shift to the right – a blow occurs, the motorcyclist flies off the side of the road – watch the video.

Officially. According to Anna Varnavskaya, senior inspector of traffic safety propaganda of the State Traffic Safety Inspectorate for Novosibirsk, on May 15 at 18 o’clock near the house on Bolshevistskaya Street, 280 an accident occurred with the participation of a Toyota Corolla driven by a driver born in 1992 and a Suzuki GSX driven by a driver born in 1977 … The Toyota driver explained that he was moving in the left lane and began changing lanes to the right lane, after which there was a blow from a motorcycle to the right side. The motorcycle driver explained that, unexpectedly for him, the car began to rebuild, which provoked an accident.

The violation of the driver of the car is preliminarily established: clause 10.1 (inconsistency of speed with road conditions) and clause 9.10 (non-observance of the lateral interval).

Yes, the maneuver of the Toyota driver is incomprehensible, even if there was no motorcycle there, it is dangerous to lane so close in front of a nearby car. Or maybe he just got distracted and the car drove to the right. But the movement of a motorcycle cannot be called safe, all the way the biker is on the verge of life and death, high speed, some centimeters – and that’s it, touched the car and flew away. Experts prefer to place the blame for the accident on the motorcyclist.

– Everything is obvious here, the motorcyclist touched the mirror of the car with a mirror, but why? Because I was driving between cars, and a motorcycle is just a vehicle that must move in a row according to lanes. But, as you know, all motorcyclists prefer movement between cars, that is, between the rows. For which they suffer, – says the head of the service of emergency commissioners “Alliance” Oksana Kositskaya.

– The motorcycle did not follow the lane, Toyota was not convinced of the safety of the lane change maneuver and did not turn on the turn signal. The motorcycle is mostly to blame, ”says Denis Almazov, director of the Avtoyurist company. 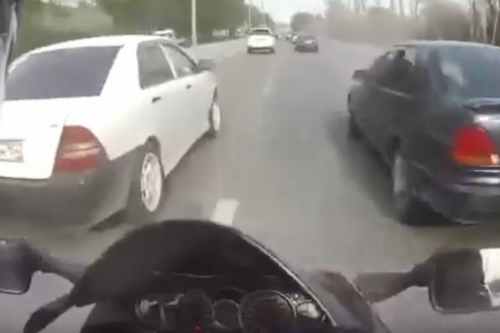 Based on the configuration of the dashboard of the Suzuki GSX motorcycle and from what we see on the record, in some areas the biker accelerated to 150-160 km / h. In the photo you can see the almost vertical position of the arrow on the right scale (speedometer), this corresponds to the 160 km / h mark on this model.

So, if you go by car, you will not notice the “flight of lightning” and you will be guilty – you did not control the lateral interval. Although, of course, it is not worth changing suddenly and without turn signals – be sure to turn on the signal in advance, show your intention to turn by smooth sequential displacement out of the lane, you should not make sharp maneuvers.

2 serious accidents occurred on the Bugrinsky bridge in a week