In Novosibirsk, a video appeared with the moment of the accident, which happened yesterday, on April 12, at the Krasnoye P rospekt. During the accident, the driver of the BMW X5 hit two pedestrians on the sidewalk and flew into the building.

The video appeared at the “Novosibirsk evacuation service” AST-54 “”, there it is noticeable how the BMW X5 collided with the BMW X3.

Two pedestrians in a hospital

According to information from the traffic police in Novosibirsk, at 17:30 a 24-year-old driver in a BMW X5 was moving along Krasny Prospekt from Krylov Street towards Frunze Street. On the way, he collided with a BMW X3 driven by a 51-year-old driver, and then a Toyota Carina driven by a 37-year-old man.

After that, the BMW X5 flew onto the sidewalk and knocked down two pedestrians, and then crashed into a building.

– As a result of the road accident, a passenger VMW X3, who was previously diagnosed with SHM, was injured. The drivers of the vehicles were not injured, – the traffic police said. 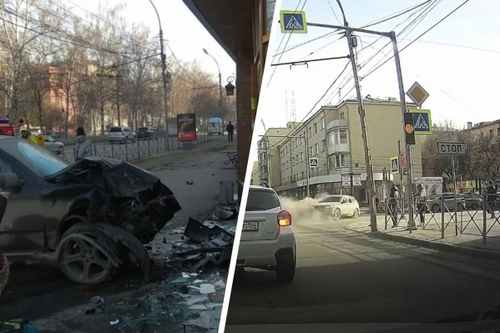 The press service of the Ministry of Health of the Novosibirsk region told the NGS journalist today that two people injured in an accident are in a state of moderate severity. One of them is in the department of neurosurgery, the other in traumatology.

What eyewitnesses say: two versions of who is to blame

This afternoon, one of the eyewitnesses to the accident with a BMW X5 on Krasny Prospekt in Novosibirsk told his version of how the car was driving before the accident. According to him, the driver behaved aggressively, moving along the designated lane.

– The guy in the BMW X5 first dived into the middle lane, and then between the cars that had already stopped at a traffic light in the second lane, he dived in front of the BMW X3 into the designated lane. BMW X5 jumped out at the intersection, hit the BMW X3 and flew into the people, – Ivan said.

Later, another eyewitness contacted the editorial office – Mikhail Dementyev, who at the time of the accident was at the intersection where the accident occurred. He has a different version.

– The guy in the X5 was really driving very fast, he flew past us, but was driving along the designated lane from the very beginning.

According to Mikhail, the emergency situation was created by the BMW X3, because it crossed the Red Avenue at a red light and crashed into a BMW X5.

– The driver of the BMW X3 drove out, saw the BMW X5, tried to gasp in order to rectify the situation, but he did not succeed, because the car could not switch at the beginning of the movement. The blow hit the back door, the rear fender of this BMW X3, it turned around. It touched Toyota, but I have not seen it, – said Mikhail Dementyev.

Last week, on April 8, a Honda car collided with a VAZ that was turning around. Two pensioners were killed in an accident. The moment of this tragedy was captured on video. Siberian woman about the problems that the tenant gave her