More than a thousand Russian doctors signed a letter demanding assistance to Navalny. An open appeal to the Federal Penitentiary Service and the ” political leadership of the country” with a demand to provide medical assistance to prisoner Alexei Navalny was signed by more than 1,000 Russian doctors and medical workers.

Among them are doctors from Novosibirsk.

“We demand that the Federal Penitentiary Service, all competent departments and the political leadership of our country immediately intervene in the situation and immediately provide medical assistance, creating all the conditions for the normalization of Alexei Navalny’s condition,” the text of the appeal says.

The authors write that they know about Navalny’s condition only from his statements and letters, as well as the appeal of his wife Yulia. Doctors believe that in his case we can talk about both a complication after poisoning and a newly developed disease against the background of incomplete rehabilitation.

Doctors are sure that leaving a patient in such a state without help can lead to the development of severe consequences, including loss of leg function.

The letter was signed by 17 Novosibirsk doctors, but most of them did not agree to speak with the NGS because of possible problems at work. Only therapist Tatyana Ozernaya agreed to comment:

– I agree with the authors of the letter. I think a much larger number of doctors would have signed if they were not state employees or were not dependent on their employer. Because it is dangerous at the present time. Since I am able to do this, I do. Physicians are very dependent, like teachers, because this is a budget, it is very dependent on those who give them work. 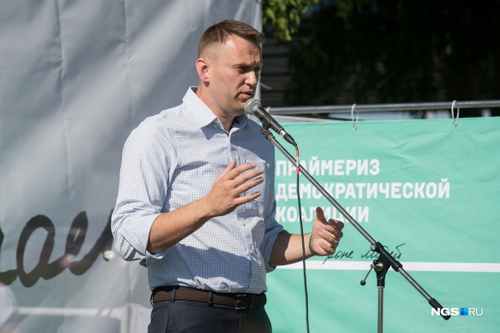 According to the Siberian woman, that she worked as a doctor for 15 years, but now she left for a foreign pharmaceutical company:

– Navalny just like a ray of light highlighted this terrible situation with the situation of prisoners in the FSIN. What is happening to him is, of course, an egregious situation. But I hope that if we manage to move something, we will thereby help not only Alexei, but also many other people. Because this is the horror that is going on. We all don’t want to be tortured in prison. And, given the absence of laws, everyone can be there. By signing the letter, we lay straws for ourselves, – the doctor explained.

Alexey Navalny has been in prison since February. At the end of March, his lawyers said that the oppositionist’s health condition deteriorated in the colony – at first his back hurt for a long time, then his leg began to be taken away. The Federal Penitentiary Service of Russia for the Vladimir Region reported in response that, according to the results of the examination, his state of health was assessed as stable and satisfactory. A doctor was not allowed to visit Navalny and he was not given the necessary medications. On March 31, the oppositionist went on a hunger strike.

Alexei Navalny was detained on January 17 immediately after returning to Russia from Germany, where he underwent a course of treatment and rehabilitation. The court arrested the politician for 30 days the very next day, and on February 2 considered the FSIN’s proposal to replace his suspended sentence with a real one in the Yves Rocher case and satisfied him by sending the oppositionist to a colony.

The oppositionist was convoyed to IK-2 in Pokrov, Vladimir region. The Yves Rocher case is one of several criminal cases initiated by the Investigative Committee of Russia, in which Alexei Navalny and his brother Oleg are involved. According to the investigation, the brothers stole 26 million rubles from the Yves Rocher company.

Oleg was sentenced to a real term, Alexei – to a suspended sentence (the term expired on December 30, 2020). Under the terms of the sentence, Navalny was supposed to report to the police twice a month, but he did not. First of all, due to the fact that after the poisoning in August 2020, he spent several months in a German clinic and returned to Russia only in January 2021. Then the FSIN threatened to replace the suspended sentence with a real one, citing a violation of the rules of conditional release. The Prosecutor General’s Office called the FSIN’s submission “legitimate and justified.”