The Novosibirsk authorities have begun to demolish the Army Sports Club (SKA) pool on Voinskaya Street, built in the 1960s. The building has fallen into disrepair in recent years. Since 2013, the city authorities have been discussing a major overhaul of the building; in 2016, it was even designated for demolition. In 2020, they remembered the abandoned building of the largest pool again – they decided to reconstruct it for 234 million and yesterday, on February 4, they began to break down the walls. After that, touching memories of the townspeople began to come to our editorial office.

Someone learned to swim in it, someone lost a gold chain at the bottom of the pool. And someone remembered the small trees that have already grown. We have collected the warmest memories of Siberians about the old days, when the SKA pool was still open for swimmers and swimmers.

– I grew up in a military town. He lived opposite the Garrison Officers’ House. SKA is the first ice hockey skates, mass skating on the ice of a football field, which was then flooded every winter. Music, changing room, pies, cheesecakes and tea, skating with the girls by the hand. Then, when a pool with the first 50-meter tracks was built there, I already gave my son there, who was taught to swim there, – recalls our reader Alexander Meilikhov, who now lives in Germany. 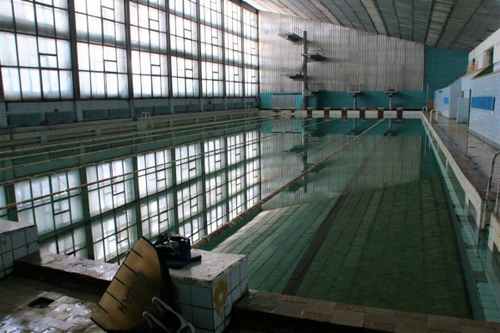 – My children and I went to this pool. In severe frosts, the transport did not go, so we walked along the tram rails to Voinskaya, and then to the pool. When we returned home, we stopped at the water pump and drank water from it – the spray froze on the fly, but we were hot in 40-degree frost. And now I am a disabled person of the 2nd group and I will be very glad if I can visit the pool again, – says Zoya Gizatulina, a reader of the NGS.

After the reconstruction, the renovated swimming pool will create conditions for sports for people with limited mobility – the project provides for lifts and special lifting mechanisms near the pool bath.

– I went to this pool, as a student of SibSUTI in the late 90s and early 00s, the teacher Valentin Mikhailovich Romanov allowed not to go to physical education classes if you go to this pool. The most memorable moment was when I jumped from a 10-meter tower for the first time, – said Dmitry Klimov, a reader of the NGS.

– My grandfather was the director of this pool for several years. At the time, in the late 1980s, both the pool and the SKA stadium flourished. It was very comfortable to study there. Great trainers, super water. The order was perfect. And in the evening, for the health groups, grandfather picked up good music on vinyl records himself and turned on the turntable through the speakers in the pool room. It was a magical time. By the way, he himself planted the trees that were planted in front of the pool with tiny seedlings. Negotiated and brought, – says the granddaughter of Nikolai Serebryakov – Elena, a reader of the NGS.

– I remember the SKA pool from the 80s, when we were still schoolchildren of the Oktyabrsky District brought there for swimming lessons. I remember how we were taught to stay on the water, the pool seemed so huge to us. In our city there have always been only two swimming pools with a track length of 50 meters. In SKA there were diving towers, a lot of athletes were engaged, the military also always visited it. Later I visited it with friends, it was a pleasure to swim in it, cool water, long paths, – rejoices the NGS reader Marina Muzraeva.

Now such long tracks are found only in the “Neptune” pool.

– We went there for physical education lessons, after which I somehow lost a gold chain with a pendant there. But it was there that I learned to swim, – the girl wrote to us.

Not so long ago in Novosibirsk they began to reconstruct another well-known building: the authorities intend to turn the old Pioner cinema into a new home for the Afanasyev Theater. And this week, after reconstruction, a sports center in the former Kosmos cinema was opened.

Death of a Russian woman at a resort in Egypt A map with the parks of Novosibirsk, will help you find the Garden of Eden and Lovers’ Square