Rescuers continue to clear the rubble at the site of a fire in the Kirovsky district of Novosibirsk, where two children died this afternoon – a boy born in 2018 and a girl born in 2019.

A private house on Olkhovskaya Street caught fire around noon. Parents and a 16-year-old teenage son managed to jump out of the fire, later it became known that another child, a 12-year-old boy, managed to get out. But adults did not manage to save very young children – the fire instantly engulfed wooden structures, and after a while the roof also collapsed.

The house burned down completely. All that was left of it were the supporting black walls. There is still a children’s boot in the yard. In the afternoon, when an NGS journalist arrived at the scene of the tragedy, firefighters and investigators were working in a neighboring house, which was also damaged by the fire. Its owners had already left by that time. Local residents do not know them well, they say that they moved about six months ago and did not communicate with anyone.

Investigative Committee opened a criminal case over the death of two children in a fire in Novosibirsk. All that remains of half of the house where the family lived 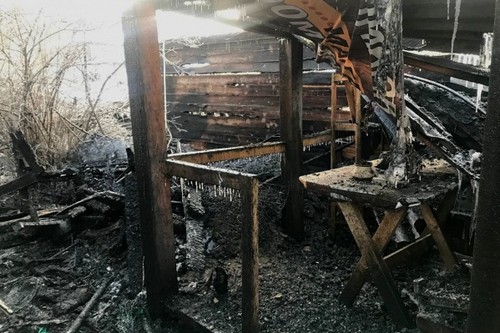 The family, from whose house the fire started, appeared on Olkhovskaya also relatively recently – in August.

“They haven’t paid the money for this house yet,” said neighbor Oksana Viktorovna. – We had a grandmother, blind. She bequeathed this house to her son. And the son sold and sold, he could not sell. And I found these. And this with the children here is freedom. They agreed that they would pay these one and a half million for several years. Well, that’s all. They paid and paid for a short time. They didn’t talk to us much. The kids were seen walking. And these young people hardly communicated with us.

Local residents lined up in front of the emergency services. For Olkhovskaya Street, what happened was a real shock. They explain: there are not many houses here, they know everything about everyone and communicate, they often help each other. But the family, where the fire occurred, lived separately and hardly communicated with neighbors. Locals say she gave the impression of being dysfunctional.

According to neighbors, six people lived in the house – a father with a mother and four children.

– He did a little part-time. Our neighbor, Zhenya, is engaged in apartment renovation and took him to his assistant. Well, I gave him a job, easy. There the fence was to be forged, there – the walls were plastered. He could not be called rukasty, and he applied to the bottle. But Zhenya saw that they were living without a penny. It was a pity for the kids, – says Dmitry, a local resident.

The fire engulfed the house very quickly, none of the neighbors with whom the NGS correspondent managed to talk, saw neither the moment of the fire, nor how the adults ran out of the house.

– When I arrived, everything was already blazing, the smoke stood in a pillar. Before my eyes, the fire instantly transferred from one house to another – I thought that it only happens in films. The parents were wrapped in a blanket. I heard the police ask them, “Where are the children? Where are children?” They mumbled something in response, and then they were taken away, – says another resident of Olkhovskaya.

– A 16-year-old boy ran out with his parents, and the little ones stayed there. Why they could not be pulled out, I cannot understand, – a girl of about 30 shakes her head.

The eldest son, according to preliminary data, received a head injury and severe burns to his face in a fire.

– The boy got burned badly, oh, badly, – says the neighbor. – He didn’t say anything at all, he couldn’t. The whole face was covered in blood, either from the nose, or from where it was coming from. I still didn’t get it. They wrapped him in a blanket, put him in an ambulance and took him to the hospital.

The parents of the deceased children were questioned at the scene and then taken to the Investigative Committee. On the fact of the fire, a criminal case was initiated under Part 3 of Article 109 of the Criminal Code of the Russian Federation (causing death by negligence to two or more persons).

Novosibirsk, where you can relax on the weekend with barbecue A scandal at a prestigious IT lyceum. 11 houses were detached from it