The city of Minusinsk can be safely called the tomato capital of Russia. Since 2004, the Minusinsky Tomato competition for the largest tomato has been held here annually. Thanks to its main prize – a car – it thunders all over the country.

Agroblogger Natalya Shcherbinina wins it for the second time. Moreover, this year she set a record – her giant weighing almost 2.3 kilograms became the largest in the history of the competition. And a little later it was recognized as the largest in Russia. NGS24.RU correspondents visited the breeder’s greenhouses and learned the main secrets of a rich harvest of one of the best gardeners in Russia.

In 440 kilometers from Krasnoyarsk, on the outskirts of Minusinsk, at the gate of her house we were met by an energetic agroblogger Natalya Shcherbinina. A blade of grass to a blade of grass, a flower to a flower, tile to tile – she has order in everything. Explains that growing the largest tomato in the country is impossible by accident. It is hard work and almost 40 years of experience with all kinds of tomatoes.

In the yard she has a brand new Lada-Granta – the second car Natalia won. She received the first in 2010 for winning the same competition. The family already has a car, so it was decided to sell it.

– Among those who rejoice with me, there are spiteful critics. That’s what I call them. Many people write: they would give the car to an orphanage or give it to someone. To which I want to answer: well, this is work! This is my daily, hourly work! – the pensioner insists.

Natalia leads straight to the greenhouse – there are 54 varieties of tomatoes, and a giant has grown on only one bush.

– This is the place where our champion grew up. For him, we made a special cotton cradle so that it does not fall anywhere – the weight was very large, the stem had to be fixed. The potential was great, we saw that it had a good incipient mass, and therefore we decided to bet on it, ”says Natalya.

The winner’s variety speaks for itself – “Minusinsk large”.

– The townsfolk say: “Of course, you left one tomato on the bush, so it grew big.” No, according to the protocol of the competition, we need 5 more tomatoes on the bush, in addition to the champion himself. On the one hand, it’s luck. But the most important thing is all agrotechnical methods. I have been dealing with tomatoes for 39 years. I know when to tie it up, when it needs watering, when it needs feeding.

In Natalia’s greenhouse, everything is clear: the varieties are signed, the harvest is harvested on time, the temperature regime is observed. Among the most valuable is the pink tulip variety. It really does have the shape of a bud. Natalya assures: every self-respecting breeder dreams of such exoticism, he is hunted not only in Russia, but all over the world. Every year – experiments with new varieties. This year alone, 80 new products. Another 100 are varieties that showed themselves well last year. This season, about 100 buckets were collected from 180 tomato bushes.

In one greenhouse Natalia collected seeds from the USA, Bulgaria, Poland, Romania, Croatia. The gardener emphasizes: everyone can grow large tomatoes, the main thing is to follow three basic rules.

– The most important thing for a tomato is to make three basic dressings. We landed, 15 days have passed – we are doing the first nitrogen fertilization. This will help nudge the vegetative mass, the tomato will gain strength, and flower tassels will appear. As soon as we see several flower brushes, we do the second dressing – phosphorus-potassium. And the third, the main one, when the tomato is already beginning to gain weight – add potassium and calcium. In order for the fruit to be large, sugar and tasty.

The key mistake, according to Natalia, is to close the greenhouses. This should not be done even at night. Tomatoes are only afraid of frost. The rest of the time they need ventilation and air circulation. 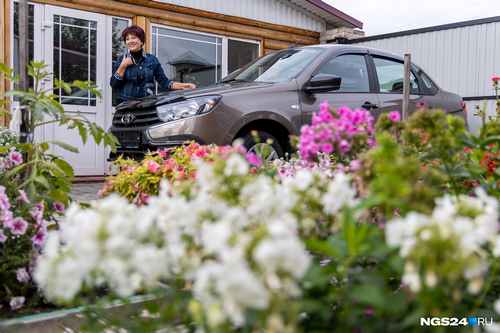 Another tip: the more tomato is on the mother bush, the richer the taste.

– Why are our tomatoes so delicious? Because they live with mommy. (Smiling) This is called natural ripeness. If picked green and left to ripen in a box, this is already technical ripeness. The taste is different!

– You need to start planting tomatoes when the soil warms up to 12 degrees. Keeping track of the weather in the greenhouse is also important. If the temperature in the greenhouse rises above 32 degrees, the clusters of the inflorescences dry out – do not expect a good harvest.

Star Wars for the harvest

All the work in the garden is done together with her husband. Both are teachers by profession, but they left school in the 90s. You can’t earn a lot of money there, assures Natalya. Since then, they have been running a family business – a headwear store in Minusinsk. And after the working day, the “second shift” begins – tomato. No helpers, all by themselves – two sons have their own gardens. A pension of 12,500 is enough only for the seeds of new varieties at the beginning of the season.

Natalia’s parents started growing tomatoes in the garden after moving to Minusinsk from Lake Baikal. They started with local varieties. Now an agroblogger from Minusinsk exchanges seeds with collectors from all over the world and sells them to all those who dream of growing a large tomato on their land.

– I have no special agrotechnical education. Everything I need, I search the Internet. Now this field is such that I can ask any question and get an answer to it. Therefore, any person can grow tomatoes, if all conditions are met.

Slyly squints his eyes and escorts us to the treasury – a room where ripe tomatoes are kept. Red, yellow, purple – which is just not there. And the names of the varieties are even more exotic than the colors. US breeders are clearly partial to George Lucas’s films.

– I will buy seeds for any money, if this variety is interesting to me. If we do not exchange, but buy, then 10-15 thousand we can spend on seeds. We purchase fertilizers, implements, humus. It takes another 20 thousand. It pays off at the end of the summer. We wouldn’t be doing this if we didn’t make money on it. This is a hellish, colossal work – to cut all the tomatoes, get the seeds, dry, ferment, rinse, dry, and pack the next day. We don’t rest at all. We will have nights without sleep, ”Natalya throws up her hands.

Take note: of the Minusinsk varieties, Natalya considers the Sodsinskoe miracle the most delicious. From the exotic he praises the “Siberian tiger”.

Tomatoes will be processed after harvest. Some will be given to friends and relatives, some will be sold, the rest will be used for seeds. They are in demand among farmers not only in Russia, but also in the world.

Tells that the secret of her success is in planning. Every evening Natalya schedules tasks for the next day and acts according to her plan. In the morning – the most difficult things, in the afternoon – routine.

I started uploading photos of the harvest on the Internet in 2011, I had to complete computer literacy courses. In January, with her blog about tomatoes, she took third place in the all-Russian competition “Thank you to the Internet – 2020” in the nomination “I am an Internet star”. So the whole country learned about 59-year-old Natalya Shcherbinina. And with the victory in the competition this year, a new wave of fame fell upon her.

Natalia admits: the desire to quit everything arises every year with her husband. But winter passes, and with it rest. New items appear on seed-selling sites, and everything starts anew.

– The husband says: “It’s starting again, don’t touch mom, she’s already crazy with us!” (Laughs) And I don’t know when it will stop. But while we live and burn with it. Pain that cannot be: what is psychosomatics and how is it treated