Musician Slava Marlow (real name Artem Gottlieb) gave an interview to Yuri Dudyu, glorifying Novosibirsk throughout the country. During the conversation, the artist said that the city does not get better over time, and mentioned the famous Novosibirsk stench.

Former Siberian journalist Alexander Popov watched a two-hour interview criticizing his small homeland and expressed his opinion. We publish his post in full.

I knew nothing about the pretty boy Artyom Gottlieb, who, as it turned out, is known throughout the country under the pseudonym Slava Marlow. And now he is one of the new “superstars” who “burn like agony.” It also turned out that this boy was born and raised in Novosibirsk. Therefore, I risked my mental health and decided to watch his interview with Dudyu, because I also knew that Slava in this program cut something honest about our common homeland. I deliberately put the word “star” in quotation marks, since I myself have not heard any of these young and early people, I do not listen and I do not want to listen – but these are exclusively my personal problems.

I do not impose my opinion on anyone and do not consider those who like these performers and musicians to be some kind of wrong people. There is no dispute about tastes, and since the stars are lit, it means that someone needs it. 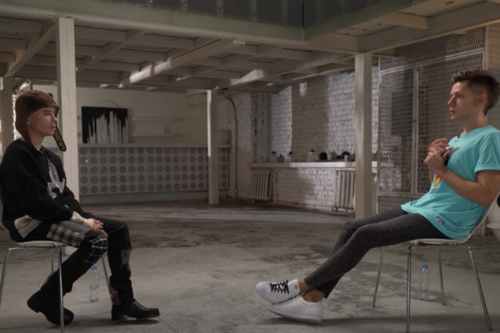 The graduation as a whole pleasantly surprised me – the boy is clearly not stupid, speaks very well and, which even surprised the interviewer, does not swear at all! And because he himself does not seem to like it, and because he feels his responsibility to immature minds, which he is now able to influence “with his creativity.” And finally, just so as not to upset grandparents.

Slava began, however, with the fact that, embarrassed and blushing, he frankly told about buying himself very expensive panties. And in general, that he cannot choose good underwear for himself because of his dystrophy. I have already mentally prepared for the fact that the rest of the conversation will circle around and around this plinth (this has already happened with Dud, for example, with rapper Face). But, fortunately, Slava quickly taxied to higher thematic levels (for him, of course, but thanks for that too).

Before telling that he is in a relationship with some no less famous blogger (or blogger – sorry, I’m not good at the new gender-tinged newspeak), Slava interrupted the interview and first called her to agree on his loud confession … It looked downright masculine! Moreover, Slava could not restrain himself and supplemented this coming-out with an extremely interesting detail for everyone – that this girl has a very cool ass!

But, of course, I was waiting for Slava’s opinion about the “big cool Siberian city”, as for some reason Yuri Dud called Novosibirsk. Slava did not agree with Yuri and replied that he considered his hometown “rapidly dying”, from where “all talented youth leave for big cities, as it usually happens.” Every time Slava comes to Novosibirsk, and this happens less and less, once every three to four months, “the city does not get better, it only gets worse, everything gets worse.” Apparently, after that Slava gets drunk again.

As an example of the degradation of the homeland, the idol of the youth told about the smell of shit at the Tolmachevo airport, which has been meeting everyone arriving in Novosibirsk for many, many years. Slava is surprised that no one can solve this shameful problem in any way. I won’t argue with Slava about the stench that greets all guests of the capital of Siberia.

So he is very funny in his sincere surprise that this problem has not been solved for “10 years” – he simply does not know that no one was ever going to solve it. But about the “rapidly dying” city, of course, I disagree with Slava. And not only because the young rapper in this diagnosis is not a wise guru who has suddenly learned the secret of the universe. For the axiom that “all talented young people” are leaving Novosibirsk, I do not have enough statistics – and I suspect they are not. Subjective assessments in this case are not representative data. Perhaps he is leaving, but obviously not all. And maybe not that talented. But for the city-train station, such a constant flow through the “central checkpoint of Russia” seems to have never been a problem.

Nevertheless, on an emotional level, I largely agree with Slava. I myself, of course, have nothing to do with talented youth, but I also left Novosibirsk (the author of the column now lives in Kazan. – Ed.) – and largely because I’m tired of waiting for radical changes in the quality of the urban environment soon. And he stopped believing in the very possibility of these changes, at least in his lifetime.

Human life is very short, to be spent waiting for a “bright future” – it is easier to leave where it is more comfortable to live here and now. I think the “talented youth” also thinks in about the same categories. No LDS with an unnecessary metro station, no new bridges will change the situation in this regard – Novosibirsk needs completely different changes. But I don’t have an extra century of life to wait for them. After all, even the stench in Tolmachevo remains a constant of existence, although it would seem …