The two-day trip of Ukraine’s President-elect  Vladimir Zelensky to Turkey outraged the public. According to the politician, he took his children to the annual festival “Fun”. This is his first weekend in four months from the beginning of the election campaign. But the vice-speaker of the Verkhovna Rada, Irina  Gerashchenko, criticized the showman and compared his vacation with Poroshenko’s journey to the Maldives. “MK” found out in which hotel Zelensky would stay and on what occasion he went to the coast of the Aegean Sea. 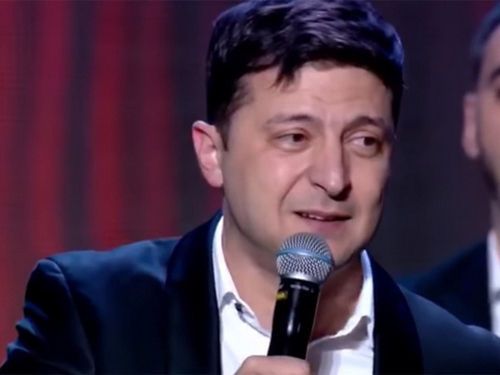 Studio “Quarter 95”, led by Vladimir Zelensky, holds the festival “Fun” in Turkey every year. This time, the elected President of Ukraine will not enter the stage. In 2019, the Fun Festival will be held at the Lujo Hotel near Bodrum. “MK” contacted representatives of the hotel in an attempt to buy a ticket for the show, but it turned out that only residents of the hotel could be guests of the holiday. And next week, when the fun festival will be held (from April 30 to May 7), all the numbers are occupied. The cost of the tour, which includes airfare from Kiev to Bodrum, hotel accommodation and meals start at 1,448 euros.

Zelensky reported about the trip on his Facebook page. He attached a photo to the publication, where the aircraft’s side can be seen in the background. As for the security of the future guarantor, his life changed dramatically around 20-00 on April 21, 2019. This happened simultaneously with the announcement of the National exit poll on Parkovoye Highway to the building of the famous “Yanukovych helipad” several cars drove up and the state security service interceded to guard the future president of Ukraine.

Now, regardless of his status, he is still a presidential candidate, Zelensky is being guarded as acting guarantor – that is, strictly and from a bullet. The usual security of the showman was to be seen on March 31 and April 21 – they were strong men who quickly learned how to act against a crowd of disgruntled journalists. By April 21, red ribbons appeared in the headquarters, dividing the premises into zones, paths for the passage of Vladimir Zelensky and his evacuation to the banquet was exemplary.

“You just do not understand! – A colleague familiar with the question spoke with an admiring smile. – Zelensky still had a concert guard! The fighters, who are used to and know how to cut off the crowd, distract especially annoying fans and quickly take the protected star to the dressing room, are accustomed to working in the crowd of not sober people. Other people are needed from the bullet, Volodya’s life will change a lot just in the coming days. ”

Vladimir Zelensky, probably, was not going to be the president of the country at all. As it is sung in the song that gave the main slogan of his company: “Everything became (it happened – ukr. Approx MK) by itself!” – and in Kiev there are still posters of concerts from May 23 and 25 in the October Palace, which allegedly should lead actor Vladimir Zelensky. A couple of days before the vote in the first round, instead of the scheduled live debates with Yulia Tymoshenko and Petro Poroshenko, he gave his last two concerts for money in Brovary, doublet, at 17-00 and 20-00 on the evening of March 29. Back in March, Vladimir starred in the recordings of the future programs of the “Evening Quarter”. His company, Kvartal-95, was just about to launch a new project, the Women’s Quarter, to celebrate Zelensky’s victory, his friend Alexander Pikalov came straight from the next exhausting rehearsal with girls,

On April 26, Vladimir Zelensky shook his old days – went to the beginning of the usual May “Humorina” in Turkey – take the children to the competition, just for one weekend. And in the country he headed, again unhappy – the future president on the anniversary of the Chernobyl explosion, without saying a word, drove off to Turkey. About Chernobyl, of course, he finally remembered, but a little later. He still has a lot to learn, remember, portray.

The role is completely new…

– Compare this trip with the release of Poroshenko is absolutely incorrect. First, in this case it is about two days. Secondly, Zelensky warned about this publicly, from going to Turkey under his last name, not incognito. The main intrigue here is that you can fly from Turkey to Cyprus or Israel, where Igor Kolomoisky is located. Perhaps they can meet, because now the young politician and the inexperienced president need help and advice from people with experience. Especially since recently, whole planes of politicians and businessmen were flying to a meeting for the oligarch, who were discussing something there. Therefore, I do not exclude that this trip may have political considerations. In fact, in Ukraine, this trip was treated normally. Criticism was mainly made by “blowpowers” that refine their salary.

UAV insurance: experts evaluated the prospects of the market

In Sweden, they advocated the blocking of the construction of the “Nord Stream-2”

6 thoughts on “The expert appreciated the vacation Zelensky in Turkey”