An advanced MG-1I depth metal detector has been developed for the Russian engineering troops. In the course of completed tests, the upgraded metal detector showed unprecedented results. He was able to detect a 100-kilogram high-explosive aerial bomb at a depth of 6 meters. “MK” learned from experts the characteristics of a unique device created for sappers. 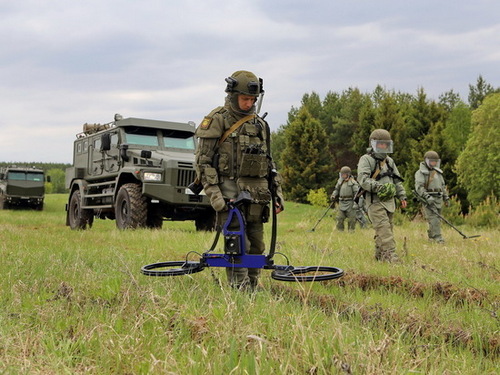 The upgrading of the MG-1 deep mine detector, intended for the detection of mines and ammunition, began according to the requirements approved by the military-scientific committee of the engineering troops. MG-1 was created in the framework of the development work “Draga”. With it, you can “see” ammunition at depths of up to 5 meters. Moreover, the equipment remotely distinguishes iron and alloys based on it from non-ferrous metals – copper, zinc, lead.

MG-1 at one time passed the full cycle of tests, including in the troops. The detectors were used, in particular, in the places of fierce battles of the times of the Great Patriotic War – in the Rzhev region of the Tver region. The metal detector passed the final test at the Central Research Testing Institute of Engineers.

The characteristics of the MG-1 mine detector showed very decent. He found a high-explosive aerial bomb with a mass of 250 kilograms at a depth of 5 meters. 122-mm artillery shells “saw” at a depth of 3 meters. A 100-mm ammunition is under a 2.5-meter-high layer of earth.

MG-1 weighs seven kilograms. 4 hours without recharging. Minesweeper can move with him at a speed of up to 3 kilometers per hour. The equipment does not lose performance at 30-degree frost and in 50-degree heat.

Well worthy features. But they decided to improve the device. So there was a deep metal detector MG-1I. During testing, he surpassed the requirements of military engineers who were asked during the modernization.

The advanced device is very much in demand. After all, engineering troops continue to search for unexploded ordnance during the Great Patriotic War. Only when cleaning the terrain in the area of ​​building a bridge across the Kerch Strait, several hundred such ammunition of various caliber were found and defused, including 5 bombs, artillery mines and 122-mm artillery shells.

Even more difficult task, our sappers had to solve in Syria. There they cleared more than 7.2 thousand hectares of territory. Nearly 120 thousand explosive objects were damaged.

And since October 2018, Russian sappers had a chance to clear the territory of Laos from old American bombs. Nearly 100 hectares were tested, more than 300 explosive items were discovered, including BLU-26, BLU-63 and BLU-3B cluster munitions.

Head of Goznak suggested changing the design of Russian banknotes