On the eve of May 9, a new information resource “Victory Commanders: Peaceful Moments of Fate” appeared on the website of the Ministry of Defense of Russia  , showing the outstanding Marshals of the Victory from an unusual point of view. Photographs from the personal archives of military leaders captured them not in a combat situation, but in a post-war peaceful life, in rare moments of rest with relatives and friends. 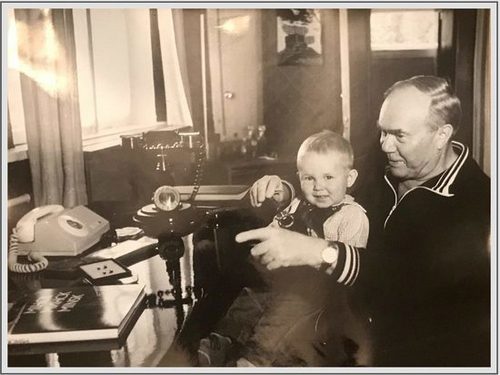 Many photographs have never been published before. Thanks to them, today it is possible to find out what the outstanding commanders of the Great Patriotic War, about their wives and children, enjoyed during leisure hours.

Few people remember, for example, that General of the Army Alexei Antonov, who participated in the development of the operational plans of the most important battles of the Great Patriotic War, was married to Olga Lepeshinskaya, prima ballerina. Photos of spouses can be seen today on the site. In the photo of the early 60s, they are on holiday in Karlovy Vary, in socialist Czechoslovakia.

The wife of the Chief Marshal of Aviation, Hero of the Soviet Union Konstantin Vershinin was also a dancer – a ballerina of the Ulyanovsk Theater and a choreographer. Judging by the personal photo, the commander preferred to relax with his children and grandchildren at a dacha outside Moscow.

Hero of the Soviet Union, Air Marshal Alexander Silantyev, during the war years, made 365 sorties. After the war, he served to the deputy head of the Air Force. Like many military leaders, he loved to rest with his family in the Crimea. The photograph of the 50s spouses Silantyev on holiday in Gurzuf.

But the Marshal of the Soviet Union, Hero of the Soviet Union Vasily Sokolovsky, who after the war headed the General Staff for 8 years, preferred to rest in the Baltic States and often spent his holidays there. He loved to swim. He was not frightened even by the cold water of the Baltic. In the photo of 1964 he is in civilian clothes in Jurmala.

Many commanders had cottages in Arkhangelsk near Moscow, some rested in the general’s sanatorium located there. So, the rest at the cottage in Arkhangelsk was twice preferred by the Hero of the Soviet Union Marshal of the Soviet Union Semen Timoshenko. He lived there for months, often visiting the former Yusupov estate located on the opposite side of the Ilinsky highway.

His neighbor in the cottage was the Hero of the Soviet Union Marshal of the Soviet Union Andrei Eremenko. In the photo of 1967, the spouses Eremenko play billiards in a cottage near Moscow in Arkhangelsk. I met Nina Ivanova at the front. She was a nurse.

Deputy Defense Minister Hovhannes Baghramyan in the photo of the 70s was also captured in the Arkhangelskoe military sanatorium near Moscow.

In his youth, USSR Minister of Defense Dmitry Ustinov was fond of motorcycles. He did not leave hobbies, and having become during the war years, at 33, the youngest Commissar of Arms of the USSR. In 1943 he had an accident, received bruises. When he recovered, he received instructions from Stalin: “Comrade Ustinov, you are state property. Do you know what happens for damage to state property? ”By the end of the war, Ustinov did not get behind the wheel anymore. After Ustinov, the gentleman of the 11 (!) Orders of Lenin, became interested in photography.

He loved to hunt in his spare time and Konstantin Rokossovsky, the only commander in Russian history – the marshal of two states at the same time – the Soviet Union and Poland. The photograph presented on the site was taken during a hunt in the 1960s.

The hero of the Soviet Union and the gentleman of the Order “Victory” Marshal of the Soviet Union Leonid Govorov, after the war, was one of the first to go to rest in the newly liberated countries of Eastern Europe from fascism. In the photo he is in Budapest in the autumn of 1945. Govorov sent to Europe on vacation with his wife, Stalin. The Supreme Commander insisted that the commander went on a two-week vacation to improve his health. He suggested that he choose two any countries in the zone of Soviet influence. Govorov chose Hungary and Czechoslovakia.

Marshal of Victory Georgy Konstantinovich Zhukov was the only commander who was awarded the title of Hero of the Soviet Union four times. After the war, had a chance to survive different. At first, he was sent by Stalin to the honorary exile in Yekaterinburg. Under Khrushchev, he spent three years as Minister of Defense and then retired. In the photo of the 1950s, Marshal Zhukov was captured on a summer vacation in Sochi.

There, obviously, Marshal of Artillery Vasily Kazakov loved to rest with his family and Hero of the Soviet Union. Since 1958, he for seven years headed the Air Defense Forces of the Ground Forces. In the photo, Kazakov during a vacation with his wife Svetlana Pavlovna in Sochi.

According to the Ministry of Defense, soldiers, residents and guests of Vladivostok, Yekaterinburg, Rostov-on-Don, St. Petersburg, Severomorsk and Khabarovsk will be able to familiarize themselves with the exposition of an unusual photo exhibition.