Attention to the meeting of the military leaders was increased. Moreover, it was on the day of their meeting in Moscow that Putin’s decree was promulgated on Russia’s suspension of the implementation of the Intermediate-Range Nuclear Forces Treaty (INF Treaty).

Following the talks, the Russian Ministry of Defense reported that the military leaders “exchanged assessments on the development of the situation in Syria.” It was also stressed the importance of “continuing interaction in the prevention of incidents.” “In addition, during the meeting, the sides discussed issues of strategic stability and regional security, including those related to missile defense, strategic offensive arms and the INF treaties,” the Russian military department said.

The very fact of negotiations between military leaders of such a high rank is regarded by many experts as positive. Since relations between the Russian Federation and the United States have moved away in recent years during the Cold War. This is not the first time Gerasimov and Dunford meet. Last year, in June, they held talks in Helsinki, where they discussed the situation in Syria.

Military leaders regularly discuss military issues by telephone. The last time was in January 2019. Basically, according to the results of the talks, officials of the Russian Ministry of Defense and the Pentagon are discussing the issues of preventing dangerous incidents during the actions of the armed forces of both states in Syria and other regions. 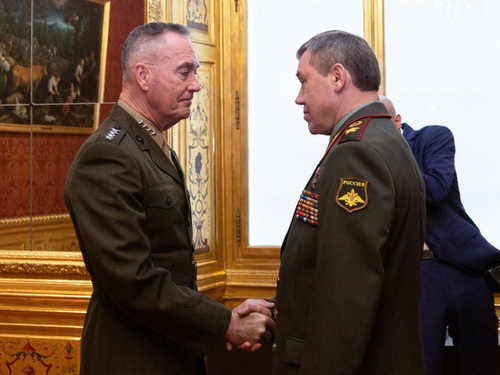 At the same time, the officials of the military departments invariably emphasize that the generals agreed not to publicize the details of the conversation.

“MK” asked about the significance of such contacts by a member of the expert council of “Officers of Russia”, Doctor of Political Sciences Sergei Smulsky. Here’s what he said:

-Russia today has a very low degree of relations with the United States. Therefore, any meeting between high-level military leaders has a positive meaning. After the United States outlined its position on the Intermediate-Range Nuclear Forces Treaty, and our President announced retaliatory measures, we can say that the arms race has started. Another thing is how it will go. Military contacts, in my opinion, can somehow contribute to the de-escalation of the arms race. Mutual understanding between military specialists is very important, because the military understands the dangers of maneuvering on the brink of an armed conflict probably better than politicians.

According to the expert, the generals probably discussed during the meeting the entire range of acute issues on the international agenda, especially situations that could lead to military confrontation and the emergence of military conflicts. This is not only the situation in Syria and the Middle East.

“Probably, we could talk about the possibility of US participation in the events in Venezuela related to the change in the regime of political power,” said Sergei Smulsky. – We see that the issue of the militarization of the Asia-Pacific region has not been fully resolved. As many experts believe, this is evidenced by the not very successful negotiations between the leaders of the United States and the DPRK.

In the message of the Russian Ministry of Defense on the results of the meeting of the two generals, they did not fail to note that “the meeting was of a constructive nature.” In maintaining strategic stability, for which both powers are responsible, even such details matter a lot.

Why is it so difficult to spend gas in rich Russia

The level of decrepitude: the ruble is preparing to fall to 70 per dollar

One thought on “The value of the meeting in Vienna, the commanders of the Russian Federation and the United States: a step towards de-escalation”