Very soon, the best half of humanity will receive congratulations on the International Women’s Day on March 8. Traditionally, more women of all colors and attention will get those ladies who serve in law enforcement agencies. Only in the Armed Forces of Russia – more than 40 thousand women soldiers, of whom more than 4 thousand are officers. About 270 thousand of the fair sex work in civil defense in the defense department. These fragile-looking women have a strong character. They are not afraid of iron discipline, irregular working hours, business trips. For many years they remain faithful to the chosen profession. 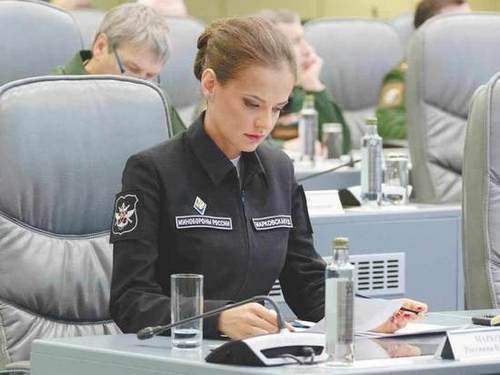 On the eve of the spring holiday, we talked to the charming and brave girl of the defense department, the press secretary of the Russian Defense Minister Sergei Shoigu Russia Markovskaya.

In an exclusive interview, she told MK why she chose the profession of a journalist, how her life changed in the new post, what books she reads and which of the holidays March 8 was the most memorable for her.

– Russians, tell me, who gave you such an unusual, “patriotic” name?

– The name gave mom. Although I was born on January 6, 1991, back in the USSR, but after the adoption of the Declaration on the sovereignty of Russia.

– How do people respond to your name abroad?

– Each country has a great variety of exonyms. For example, in Vietnamese, Russia is Nga, try, guess what I am named after Russia.

– Who influenced the choice of the profession of a journalist?

– It’s simple, a person loves what he can do. When I was in school, I was good at writing. From the third grade I composed some rhymes and thought that I would become a brilliant poetess, in high school my articles were published in a Vladivostok newspaper.

– Tell us about the first journalistic material you have prepared.

– It was, as I said, at school. In my opinion, the first article was called “I’m tired of learning, I want to work.” The material was about what position a 14-year-old “adult” person can count on.

– Which report was the most extreme?

– I think that the majority of journalists, if they are not war correspondents, will answer that the pulse quickens when you do a report on the air. It’s like in that joke when you ride a bike that burns and you burn and everything burns…

– How did you find out that you became the press secretary of the Russian Defense Minister Sergei Shoigu? Was there a preliminary interview? Did your parents consult about this?

– Approval of such a high and responsible position is a process of more than one day or week. I did not consult with my parents, because there was no doubt.

– How has your life changed when you took this post?

– It is better to ask what has changed in it! Perhaps only the phone number remained the same.

– What is your title?

– I can not have the title, since I am not a soldier, but a purely civilian person. I have a class rank – State Counselor of the Russian Federation, 3rd class. But some people do not understand the difference. Moreover, among them are those who think that the class rank is generally an innovation. Petrovsky table of ranks in their hands.

– Does it happen that, greeting you, you are “saluted”?

“Do you mean a military salute?” No, I’m a civilian.

– How is your day built when you work not in the field, but in Moscow?

– If there are no early events, then the working day starts at 8.30 and does not end. The process itself will be explained in general terms, although I try to avoid them at work and not to say “the delay of the battalion is due to the fact that the battalion is delayed”. Together with the information department, we organize information support for the activities of the minister, interviews, negotiations, programs with the participation of the head. In general, a lot of work.

– How many sets do you have? What is her shoes?

– The uniform in the Ministry of Defense must wear everything. So it is accepted in the military departments of many countries. Our civil servants wear black uniforms. I have two sets of everyday form and one front. The shoes are black, lacquered. So I am one of those women who, in the morning, opening the wardrobe, knows what to wear to her.

– Did you ever shoot?

– I learned to shoot long before I was appointed to the post of press secretary of the Minister of Defense.

– On your page on the social network you told that you are working with the personal archive of Sergey Shoigu. Which photos surprised you a lot?

– Sergey Shoigu has been in all “hot spots” since the 90s. The Ossetian-Georgian conflict, the Georgian-Abkhaz conflict, the war in Yugoslavia, the Transnistrian conflict. If you get acquainted with the video archive of those years, also note how clearly and professionally Russian rescuers acted. For example, in Tkvarcheli, in Tskhinval, from where Shoigu, along with his team, took thousands of refugees, and shot at them, firing from tanks. But no one is surprised by such brave behavior of Russian rescuers and peacekeepers under the leadership of Sergei Shoigu.

– Sergey Shoigu is a very strong-willed and fair person. Have you witnessed a situation where these traits appear?

– Do you approve of the activities of the Russian army?

– Yes, the army is the basis of the state!

“So you are a witness too.” We see these qualities every day in all work situations. From solving questions of geopolitics and security of Russia to providing children of military personnel with places in kindergartens.

– It is interesting for me to work, but to have fun is boring. In general, all cares outside the service now seem imperceptible.

– What did the guitar play give you? Can you make time for your favorite activity?

– Playing the guitar gave me not exactly what my parents were counting on… Fearlessness. I studied at a music school, and I had to go to it through a construction site, early in the morning, in the dark. It was scary, and so I thought up, as it seemed to me, an ingenious solution: I put the guitar in a black soft case and carried it in my hands, so that a passing person would clearly understand that with this girl the jokes are bad – the machine gun carries. So, with the “automatic” at the ready and finished my studies.

– What books are on your shelf? And what are you reading now?

“Recently I finished Nesbe’s Thirst, and now Pelevin’s Secret Views of Mount Fuji is in her bag. On the bookshelves I have mostly modern and documentary literature, and the classics – in the e-book.

– Ahead – March 8. Which of the holidays did you remember the most?

– I work among real men, and therefore the most memorable was the past March 8, when for the first time this holiday was celebrated in a new position. Men with flowers in their hands always look touching, and if they are also in military uniform – it disarms.