The final of the cultural and sports festival of the Rosguards was held on Saturday in Luzhniki in Moscow on the eve of the professional holiday of the National Guard troops, celebrated on March 27. Parts of the Central District of the Rosguards sent their representatives to the capital. Sport competitions, special forces demonstration exercises and special equipment exhibition were held. Correspondent “MK” watched the holiday. 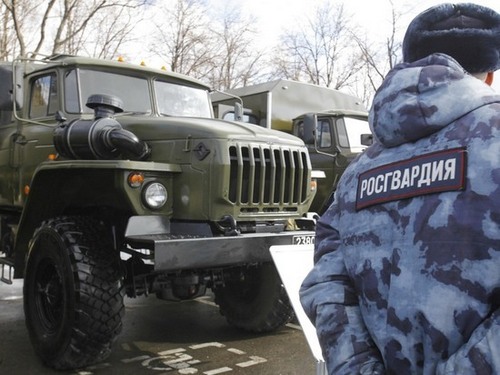 A month before the event, the commander of the troops of the Central District of the Rosguards, Colonel-General Igor Goloyev, said that it is very important for the department to inform citizens about their activities. Did this happen at the festival in Luzhniki? Perhaps, yes.

The festival program was opened by fighters of riot police and SOBR. They demonstrated fighting skills, as well as the technical capabilities of the troops. He shots (idle, of course) lays his ears, thundering explosions, smoking scenery.

The next “number” of the program could be an episode of the adventure film: the classic chase scene. According to the “scenario”, the robbers stop the car with a collector, knock the car door off with an explosion and hide from the crime scene. To intercept the vehicle is promoted Rosgvardii, blocking the car of the kidnappers, special forces neutralize the raiders.

And then – the performance of dog handlers. At first glance, it feels as if I got into a circus: dogs walk on their hind legs and carry out other orders. Trained animals are not afraid of shots and explosions and rush to intercept criminals.

After the exercises, the audience moves to the exhibition of military equipment. And if adult men remain at the stands with small arms (try, as the shutter walks, evaluate the sight), then the children choose special machines. One of the young visitors decides to park his scooter in a series of armored vehicles.

Children climb into the cars and communicate through loudspeakers:

– They attacked our base, I need help!

– How to hear reception?

Somehow, what sci-fi recently seemed to us to be completely routinely passing: combat robots play tag with their children. You heard right. Radio-controlled cars chase the little guests of the exhibition, and then try to run away from them. Intended for the removal of explosive objects from public places, the machines are equipped with cameras with which the operator can see everyone around.

The final part of the exhibition is an improvised trade fair. Each department of the Rosguards in the Central District represents its own region. Here and Tula gingerbread, and dug out on the Kursk arc artifacts of the war and much more that.

Nearby are fighters competitions in various disciplines – from weightlifting and armwrestling to darts.

Well, and what holiday without competition of military cooks ?! If you think that buckwheat with stew from the field kitchen is a non-original thing, then, having tried it in so many variations, you would change your point of view.

At the end of the event, guests go to a concert.

Over Luzhniki loudspeakers echo children’s voices: “I chase a criminal”, “Reception and reception! I can’t hear you!.. ”It is unlikely that the children playing the police understand why all this is needed around – robots, armored vehicles, dogs, gunshots, smoke screens and explosions. In fact, everything is simple: the fighters, weapons and equipment of the Rosguards are our safety. This is exactly what the festival in Luzhniki reminded of.