Moscow Region Alabino in April will turn into the main landfill of the country. It is here that three days a week military personnel and equipment will prepare for the May Victory Parade. On Wednesday, April 3, the first big rehearsal took place in Alabino. True, so far they have done without air travel – combat “Wings of Russia” have joined the training since April 8. By tradition, each Victory Parade is not only well-defined “squares” of servicemen of the Guards appearance and statues. It is also a showcase of new weapons. “MK” found out what the Defense Ministry will surprise this time. 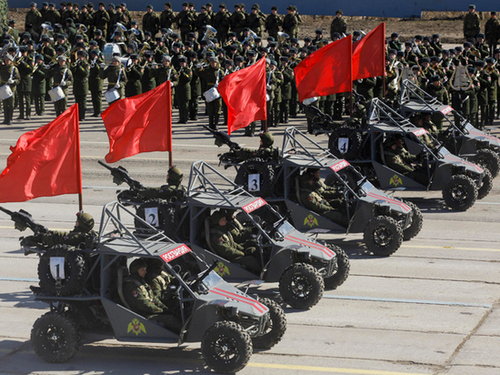 Alabino, 10:00. An unforgettable “People’s War is Coming” and an Honor Guard carried the Victory Banner to the improvised ceremonial square. In the parade, more than 10 thousand servicemen died. From the abundance of chevrons dazzled in the eyes: infantrymen, pilots, marines, tankers, sailors, airborne troops.

Many in the ranks and female faces. And this, by the way, is the first novelty of the future parade – it will become unprecedented in the number of girls participating in it. For the first time, girls from the Moscow University of the Ministry of Internal Affairs named after V.Kikot, cadet corps of the Investigative Committee named after Alexander Nevsky will be walking along the pavement of Red Square. And of course, a detachment of pilots from the Zhukov Military Academy of the VCS, flashing with heavenly buttonholes. But the main thing is that this year the Victory Parade will start especially beautifully, because in front of the army columns there will be a female platoon as part of the Guard of Honor company.

As soon as the march struck, it became clear that girls in the form of minting a step are not worse than guys.

“And we also train a lot,” says Vladlen Korol, a student in the Moscow military boarding school. – And, without interrupting study.

– Difficult? – I am interested in the student Ksenia Smirnova.

– But this is nothing. For us to participate in the Parade is an honor! – supports vladlena girlfriend.

This year more than thirty ceremonial “boxes” will be held on Red Square. The first are marched cadets, cadets, Suvorov and Nakhimov, as well as a detachment of young soldiers. Behind them – the smooth formation of motorized infantry, border guards, tankers, paratroopers, pilots and marines. As in previous years, we will see “polite people” – dressed in the “Warrior” outfit, they will march past the stands. Their training is striking. They say that among them there are real veterans of the fighting.

The culmination of the parade is the departure of equipment. From 2015 to him special attention. Then several new products were rolled out on the pavement of Red Square at once – this was the Kurganets and the Boomerang, and of course the T-14 Armata. In subsequent years, the demonstration of technical innovations has become a tradition. In 2016, they showed an armored car “Tiger” with a combat robotic module “Crossbow”, amphibious armored personnel carrier “Shell” and an infantry fighting vehicle BMD-4M. In the 17th, emphasis was placed on the Arctic – the world saw the Pantsir-1C and Tor-M2DT in the Arctic version. Last year, a whole detachment of armored vehicles rolled out: the Typhoon-K with the 4X4 wheel formula, the updated Tiger and Patrol, and the Ural armored vehicle. Finally, the long-awaited novelty – the fifth-generation Su-57 aircraft – soared into the sky.

And this year, the Ministry of Defense promises only two new items, but rather interesting ones. For the first time, an armored four-wheel drive vehicle “Lada 4×4” with a large-caliber machine-gun “Kord” will ride across Red Square. The “Lada” reinforced suspension, the body is sheathed with bronestal of the third class of protection.

The second debutant is even more exotic – this all-terrain vehicle buggy “Chabor M-3”. Previously, we could only see such a device in foreign films, but now it has appeared in the Russian army. Its plus is throughput and stability at high speeds. Minus – the buggy does not have a solid metal hull and the crew is deprived of even primitive protection. But, for example, in Rosgvardii he was already loved and even run in the mountains of the Caucasus.

Training Victory Parade in Alabino will be held until April 26. Afterwards, a series of dress rehearsals will begin, in which Defense Minister Sergei Shoigu will take part. Army commander-in-chief, Army General Oleg Salyukov, will take part in the April training runs from higher generals.

Victory Parade is being prepared in the headquarters of military districts, fleets and combined arms armies in 27 cities of Russia. The next training is scheduled for April 5th.