In the collective security system of the CIS countries there is a key link. This is the 201st Russian military base stationed in Tajikistan. More than three thousand of our servicemen are serving there. Conditions are not easy. It is not by chance that in the army experience a year of service here goes for three. The members of the Public Council under the Ministry of Defense decided to personally verify how it served to our soldiers and officers on the southern frontiers. 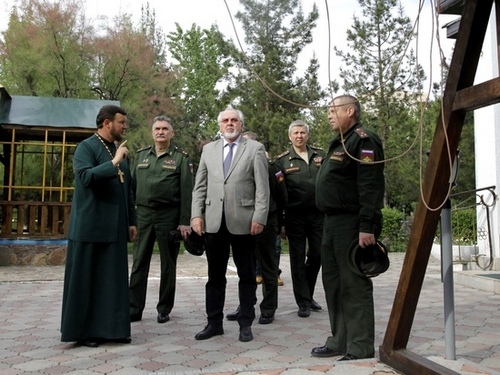 The object of the Russian military and geopolitical presence in the Central Asian region – as military experts estimate the 201st base. Moscow and Dushanbe are unanimous: the Russian military base is a guarantor of stability. Close to the border with Afghanistan with its complex domestic situation, the terrorist threat and drug trafficking. It is better to resist such challenges together. That is why a few years ago, Presidents Putin and Rakhmon agreed to extend the tenure of the 201st base until 2042. Russia is helping the Armed Forces of Tajikistan with weapons and equipment, preparing military personnel. Thanks to this help, the army of Tajikistan has grown stronger. It can independently solve many security issues in the region. This reduced the burden on the 201st base and reduced its number from 6.5 thousand to about 3.5 thousand.

During a meeting of the delegation of the Public Council under the Ministry of Defense with the base commander, Colonel Sergei Goryachev, he said that the base was staffed by servicemen for 97 percent of the full-time strength. Almost five years ago, it was decided to send here exclusively contract servicemen. There are no conscripts here. This, by the way, nullified a very sore subject before – “hazing”. Among the contract soldiers – privates and sergeants – there are quite a few mature people, under 30. That’s not enough to explain what is good and what is bad. Everyone understands and holds on to the place. Good social benefits, high (compared with the average salary in the Russian outback) monetary allowances made the service on the 201st base very attractive. Structures that produce candidates for service under the contract, have the opportunity to choose the best. As the base commander said, There are practically no “complaints”. People come to serve consciously, well representing the nature of the service and the characteristics of life in Central Asia.

The chairman of the Public Council under the Ministry of Defense, the chief editor of the MK, Pavel Gusev, during a meeting with contractors, asked about the possibility of getting a higher education or becoming an officer. He was pleasantly surprised that contract servicemen have such opportunities. According to the federal law “On the status of military personnel”, a contractor has the right after entering into a second contract to enter a higher education institution, he is granted additional leave to pass the session. The base commander reported, in turn, that this year about 50 contract servicemen wrote a report on admission to military schools. There is a selection of the most worthy. Member of the Public Council, Lieutenant-General Rafael Timoshev asked about the progress of the infantry in combat training and how often they are engaged in field conditions.

“They only returned from the fields on April 5,” the base commander Sergey Goryachev said. – Participated in battalion tactical exercises. Now lead equipment and weapons in order. According to him, the unit received a rating of “good.” Fighters train mountain training not only at the local Leur training ground, but also in Russia, on Terskol. Another member of the Public Council, director of the Center for Analysis of Strategies and Technologies of Rusla Pukhov, asked the contract servicemen if all the payments they were making reached them. It turned out that the soldiers have no complaints here. I was interested in the delegation of the Public Council and this topic: how is the Syrian combat experience used in combat training of units that serve almost in a “hot spot”? As it turned out, this experience works in the 201st base at 100 percent. In the classroom practiced new tactics management system is changing, it becomes more flexible and operational. For example, in the location of the base recently appeared auxiliary control point. With the necessary means of communication. Such “field headquarters” appeared in the Russian army after Syria.

-If life is not arranged, unfortunately, this affects alertness. Thoughts begin to work in the other direction, – said the chief editor of “MK”. But there are no such problems that would interfere with the service, as the military personnel of the base said. Well, on the question that they wanted to say to the Minister of Defense, the answer was:

– Give thanks to the Minister of Defense for putting the army in order.

– See, competition in military universities from 7 to 11 people in place. In the Krasnodar Flight School, where we were also, only among the girls is a competition for one place 20 people. And they want to be not just pilots, but fighters.

And one more place in the garrison of the 201st base could not be missed by members of the Public Council. This is the Iversko-Narva military temple. Four years ago, Defense Minister Sergei Shoigu presented the church with ten ancient namolenny icons. Today they are in a place of honor. The abbot of the church Priest Roman is also an interesting person. He served urgent in the Russian border troops on the Tajik-Afghan border. Then three years – a contract in the 201st Motorized Rifle Division. It is on its basis that the modern 201st base was created. Now Father Roman’s service is different. Here is how he says about her:

“Now our gun is the word.” Raise, inspire, guide. And there already, when the edge approaches, when the point of return has already been passed and there will be nowhere to return – how will the Lord grant.

Actually, the 201st base also exists so that no foreign policy threats can bring the matter “to the edge” for Russia and its allies. So far, it has been possible to do this well by the military personnel of the base at their responsible turn.