The first persons have several unchanging traditions. One of them is associated with a visit to the Easter service in the Cathedral of Christ the Savior. Previously, such officials were called “candlesticks”: they stood with candles, but did not understand the essence of what was happening. And now many people have a question: is Vladimir Putin really a believer or is present at the Easter service for government reasons? 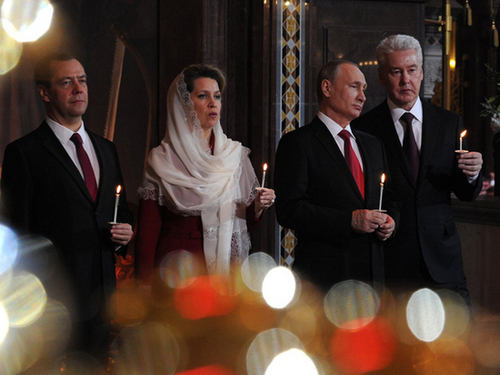 State power began to turn to face the church in the time of Gorbachev. In 1988, the 1000th anniversary of the baptism of Rus was widely celebrated in the USSR – the celebrations were broadcast on Soviet television. The Secretary General himself, of course, did not attend the service, but in the same year he declared to the then Patriarch Pimen that freedom of conscience and religion would be enshrined in law.

Boris Yeltsin was also not a church man or even a religious one. However, it was he, as the priests themselves believe, that for the first time gave the church the freedom that it seldom had by the government during its history. During the reign of Yeltsin, many churches and monasteries were returned to believers, educational institutions began to open on a large scale, and the educational and social activities of the Russian Orthodox Church were widely developed. Yeltsin established a tradition to come to the patriarch on the name-day with congratulations and a bouquet of white flowers, which is still preserved.

Archpriest Vladimir Vigilyansky, who led the press service of the Moscow Patriarchate from 2005–2012, argued that over the last 15 years of his life, Yeltsin went from an atheist to a believer: “We know that after leaving the presidency, he went to church, He visited holy places, although no one obliged him to do so. ” According to Patriarch Alexy, Yeltsin had a real Christian trait: to apologize for his specific actions.

The biography of Vladimir Putin is also not allowed to suspect him from the cradle of the believer, the church man. However, he was never an atheistic communist. For him, Orthodox Christianity is the other side of Marxism-Leninism. And both are in the service of the state. “Communist ideology is very akin to Christianity, in fact,” argued the GDP in the documentary film “Valaam,” which was shown on TV last year. – Freedom, brotherhood, equality, justice – all this is laid down in the Holy Scripture. And the Code of Builders of Communism? This is a sublimation, a primitive excerpt from the Bible, nothing new was invented there. ” In the same film, the president said things in essence, maybe correct, but unthinkable for a believer: “Lenin was placed in the Mausoleum – how does this differ from the relics of the saints for the Orthodox? I say no There is no such tradition in the Christian world. How not? Go to Athos, look, there are relics of saints there. And here too – the holy relics of Sergius and Herman. “

However, already in the first term of Putin’s presidency, the clergymen noted that he, unlike Yeltsin, who was feeling uncomfortable in the temple, demonstrates a deep acquaintance with the church service and rituals. In the book “From the First Person,” the GDP said that he was secretly baptized by his mother and a neighbor in a communal apartment, Baba Ana, secretly from his father, who was the secretary of the party’s party organization. However, he did not go to church and did not wear a cross on himself – until the trip to Israel in 1993, when, at the request of his mother, he consecrated him at the Holy Sepulcher.

The attitude to the symbol of the Christian faith in Putin changed radically after August 12, 1996, when his dacha burned to the ground due to a circuit in the wiring – only an aluminum cross survived, which the workers found unharmed found in a heap of ashes. “It was amazing, real revelation, and since then I always carry it on myself,” the president confessed. And indeed: on the frames that captured Putin with a bare-chested while relaxing in Siberia, you can see a simple cross on a string. Later, GDP suggested that it could be baptized by the father of Patriarch Cyril, who served in the 50s in the Transfiguration of the Savior Cathedral in Leningrad.

For nearly 20 years, Putin regularly visits churches and churches, which he presents with old and modern icons from his personal collection. Christmas, he usually meets in one of the regions. And in his spare time without a press and with a minimum of attendants he visits monasteries, where he communicates with superiors and elders. Already after the second inauguration, the patriarch held a private service for the GDP. In 2018, this fact was no longer concealed: after Putin took the oath, Kirill made a thanksgiving prayer service in the Kremlin’s Annunciation Cathedral.

A spokesman for the head of state, Dmitry Peskov, says that the president regularly dips into the ice hole for baptism. However, the corresponding video was published only once – during the last election campaign. At the same time, the believers themselves noticed that Putin plunged “not according to the charter”: first, he clamped his nose before the dive, and secondly, entering the hole that symbolizes the Jordan River, he crossed himself from left to right, and not from right to left, as taken from the Orthodox. Some decided that the president was worried or was affected by icy water. Others concluded that it is not an everyday thing for the GDP to cross over itself with the sign of the cross – otherwise, reflex automatism of hand movement, which no external factors can influence, has long been developed.

Putin’s opponents also claim that he is not a deeply religious person, but acts according to state necessity, realizing the influence the church has on people today. Indeed: the president has repeatedly stressed the inseparability of Orthodoxy and Russia. “Throughout history, Orthodoxy has played a very significant role in the life of our state and our people. Christian Orthodox values ​​lie above all in our moral values, and in this sense it is the most important part of the soul of Russia, ”he noted in the film“ The Patriarch ”.

According to Putin’s former friend, entrepreneur Sergey Pugachev, the president “perceives the church as a kind of community of people connected by one goal, which one way or another can be used.” Pugachev claims that he himself introduced the GDP to Tikhon Shevkunov, who is now the prior of the Pskov-Pechersky Monastery. However, he is not his confessor. And in general, no confessor Vladimir Putin, the disgraced banker believes, cannot be by definition: he simply does not need it.

It is noteworthy that last year the question “When did you believe in God?” Asked during a straight line, Putin answered rather evasively, stressing that this is a very intimate sphere, and he would not like to spread about it to the public. According to the president, each person is born with faith in God in his heart, but some are aware of this only when they are in an extreme situation – for example, like soldiers during the Great Patriotic War. Whether such a revolution has happened in the life of the GDP itself remains a mystery. To another question: “Who do you believe in?” – Putin once said that he believes “in a person, in his good thoughts”.

Note that Dmitry Medvedev, who with his wife Svetlana also attends the Easter service at the Cathedral of Christ the Savior every year, does not hide his religious views. According to the prime minister, he was baptized at 23, when he felt a need, and since then “another life began for him”. “I am a believer,” DAM confessed to Vladimir Posner’s program a few years ago, and answered the traditional question of a TV presenter that when he appeared before God, he would ask Him for “forgiveness for everything that he had done.”

5 thoughts on “Putin’s Easter Secrets: Is the President a Believer?”