In April, our “wooden” gained points: the month began with the rate of 65.4 rubles per dollar, and ended at 64.6. There was even a period of “take-off” to values ​​of 63 with a “tail”. However, the period of records is over, experts predict. We’ll have to get used to the higher bar at 66 for green. Or maybe higher. 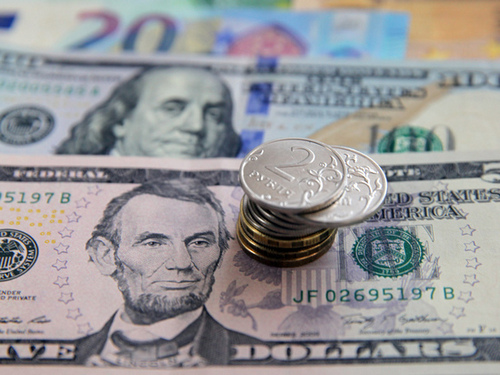 Some events in May can somewhat stir up the sluggish situation in the foreign exchange market. This “movement” will play both in plus Russian currency and in minus. But even the positive factors will not be able to pull our “wooden” to “nestydny level.” In sum, all the terms will push it lower and lower.

The closest of them will contribute on May 1st. On this day, a meeting of the US Federal Reserve System (FRS) will take place – this is an analogue of our Central Bank. It would seem, where the Fed and where our “wooden”. However, there is a connection. As expected, the US regulator will leave its key rate unchanged – at a very low level. And from this “stove” the yields of their financial instruments are dancing: these yields are low, unattractive for investors.

Whether business – against this background – rates under the Russian bonds. Interest in our assets is accompanied by an increase in the demand for the ruble: something must be paid for our bonds with “wooden”. So, indirectly, the American monetary policy supports our ruble. “These low rates stimulate the inflow of money to emerging markets and, accordingly, support their currency,” explains Sergey Drozov, a senior analyst at Finam.

The second important factor is inflation, which Rosstat will publish for April in the first decade of May. “We expect that the rate of annual inflation in April will slow to 5.3-5.4%. If the actual data does not exceed these rates, it will be a significant positive for the ruble, ”said Natalya Milchakova, deputy director of the Alpari Information and Analytical Center (AIC) at Alpari.

The third factor is reducing the risk of introducing new sanctions. Experts believe that after the publication of the famous report of US Special Prosecutor Muller, which denies any connection between the current President Trump and Russia, the threat of sanctions has shifted to the area of ​​conversational genre.

“In this context, the certification of the LC and the DPR is nothing at all. Some serious confusion in Venezuela is likely to provoke tough measures, ”concludes Raiffeisenbank senior analyst Denis Poryvai. Leveling the threat of sanctions is a strong support for the ruble.

However, besides the positive moments, there are also negative ones. So, Natalya Milchakova indicates a high uncertainty with oil prices: “The decline in oil prices in May after the rapid growth since the beginning of the year seems quite likely.” And our ruble, although it “got rid of,” as is declared, on oil prices, but nevertheless from time to time gives out harsh reactions to their changes.

As another alarming factor, Sergey Drozdov calls the rapid growth observed in the latter time in Western stock markets, especially in the US: “If the market changes there from positive to negative, speculators will quickly run out of our assets – from risk. And there will be a weakening of the ruble. ”

“A combination of two factors could be in favor of the ruble – an increase in the price of oil to $ 85 per barrel, plus the activity of non-residents in the Russian bond market at the level of March-April. Then, in the absence of sanctions, the ruble could have remained at the current level. Otherwise, he is doomed to gradually weaken. We expect a slowdown to 65-66 per dollar and drift in this range. And by the summer, maybe, where it will climb higher, ”the analyst of Raiffeisenbank predicts.

All experts agree with the “diagnosis” of 65-66 rubles for a dollar.