Yakut shaman Alexander Gabyshev was placed in the Novosibirsk psychiatric hospital No. 3. This was announced by the shaman’s lawyer Alexei Pryanishnikov.

– We received a written response from the Acting Head of SIZO No. 1 of Yakutsk to our inquiry about the place of compulsory treatment of the Yakut shaman Alexander Gabyshev. According to him, Alexander was sent to the Novosibirsk psychiatric hospital of a specialized type with intensive supervision, – writes Alexey Pryanishnikov on the Facebook social network.

Yakut shaman Alexander Gabyshev was going to go to Moscow to “expel Putin” in 2019. In September 2019, after a lawsuit for disobeying a police officer, his lawyer Alexey Pryanishkin took up his case.
According to the lawyer on his Facebook page, the case for the shaman’s compulsory treatment began in February 2021 after he was going to go to Moscow for the third time.

– After Gabyshev did not show up for the next appointment with the doctor, police officers came to him and forcibly took him to a mental hospital. At the shaman’s house, the doors were broken open, things were scattered, and there were many stains like blood on the floor, Sasha himself was taken out with a bandaged head, two stitches were put on the soft tissues, – the lawyer writes.

Alexander Gabyshev (left) ended up in a Novosibirsk psychiatric hospital. On the right is his lawyer – Alexander Pryanishnikov 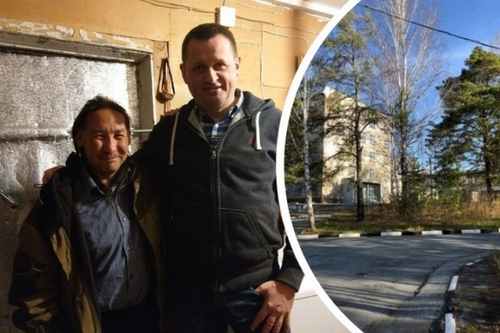 The Yakutsk court ruled on the compulsory treatment of Alexander Gabyshev at the beginning of 2021. All this time, the shaman was in jail until the entry into force of the court ruling. According to the lawyer of Alexander Gabyshev, on September 26, his sister came to see him in the pre-trial detention center and there she was told that he had been sent for treatment.

“I will fly to Novosibirsk in the next few days and go to the hospital,” lawyer Alexei Pryanishnikov told the NGS.

The full name of the hospital is the federal state institution “Novosibirsk psychiatric hospital (hospital) of a specialized type with intensive supervision.” The chief physician of the hospital, Vladimir Dresvyannikov. As reported on the hospital’s website, this is one of the eight federal psychiatric hospitals in Russia, the only one beyond the Urals, designed for compulsory treatment (by court order) of mentally ill males who have committed socially dangerous acts and are, by their mental state, a particular danger to yourself or others and requiring constant and intensive supervision.

The lawyer asked people who are not indifferent to the fate of Alexander not to call the hospital.

– A huge request not to attack the hospital with calls and not create nervousness, because all this will ultimately affect our work, our communication with the administration and with him. There, everyone has already started calling, ”asked Alexey Pryanishnikov.

The shaman Alexander Gabyshev went on foot from Yakutia to Moscow in order, according to his supporters, to “expel Putin.” The shaman was detained when he reached Buryatia and accused of extremism. The Novosibirsk resident Konstantin Eremenko painted a portrait of a shaman. He sold the portrait at auction for 23 thousand rubles.

Putin’s Easter Secrets: Is the President a Believer?

The Vinnik case: how to steal nine billion dollars

Putin called for the defense industry to release civilian products