This was found out by public figure Alexei Nosov and City Council (Communist Party) deputy Alexander Burmistrov, who went to the village, talked with members of the precinct election commission about the anomalies in the voting and recorded a video following the trip.

In the village of Filimonovsky, Chulymsky District, Novosibirsk Region, where a little more than 30 people actually live, 47 people voted in the elections to the State Duma.

During their trip, Aleksey Nosov and Alexander Burmistrov found out that 95-year-old pensioner Evdokia Kushnir left her vote among the other 47 people who came to vote at the polling station.

In the village of Filimonovsky, according to information from the deputy head of the Itkul village council, Sergei Borisovsky, more than 60 people are registered, mostly people of retirement age. They live in the village itself for about 30 (three more live a few kilometers from Filimonovsky, in an even more ruined settlement – Volkovo). At the same time, the system “GAS.Vybory” has information that 63 voters were registered at PEC No. 1321, 47 people actually voted (one of the ballots was spoiled). Voting at home was used by 18 voters. The majority of votes (over 60%) were cast for United Russia 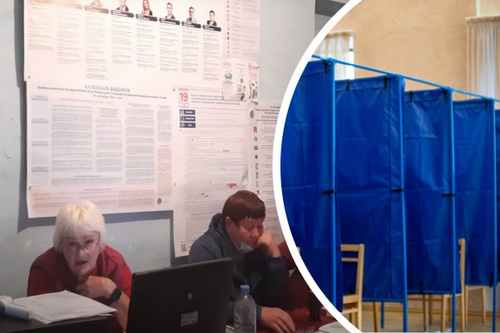 When asked about how Yevdokia Kushnir voted, the chairman of PEC No. 1321 Natalya Orlova said that the members of the commission went to her home and accepted the vote. Later she said that the pensioner had brought her daughter to the site. However, this was denied by the daughter of Evdokia Kushnir herself, to whom the authors of the video came. It turned out that an elderly woman lives 100 kilometers from Filimonovsky, in the village of Vozdvizhenskoye, together with her daughter, suffers from dementia and has not got out of bed for two years. The house where the pensioner is registered in Filimonovsky has long been destroyed.

– And you should have arrived early and showed yourself to these people (voters. – Editor’s note). Maybe they would have risen from the grave not only from Vozdvizhenka! – said the representative of the PEC at the end of the video.

The chairman and other members of the PEC refused to answer further questions to the authors of the video.

“There was an indication – 70% for United Russia, 65% for Ignatov.” What they say in the village council

As the deputy head of the Itkul village council, Sergei Borisovsky, explained to the NGS correspondent, it was not the first time that the abnormal turnout in the elections in the village was noticed.

– Many people are registered in Filimonovka, but some live in Chulym. This is a three-day voting, we cannot control all the days, but then the first day passed – and on the first day, 27 people voted for them. Almost all residents! The second day went, and on the second 6 more voted. And on the last day, 6 more remained, that’s when the observer went – our specialist from the administration, she is from United Russia. Members of the commission went, left, but she did not go anywhere, just sat at the site, – he said.

After that, he contacted Alexander Burmistrov, inviting him to visit the PEC in Filimonovsky.

According to Borisovsky, through third parties he became aware of the pressure exerted by the head of the Chulym region, Svetlana Kudryavtseva, on the chairmen of the polling stations.

– None of the administration will confirm this, although many have complained. I personally was not a witness and cannot be, because the chairpersons are only called by phone. But the fact that the chairpersons themselves go to the homes of voters, and not send members of the commission, is obvious. They drive, they collect votes. She (the head of the district Svetlana Kudryavtseva. – Ed.) And to all heads (village councils and settlements) distributed that 70% of the votes should be for United Russia, 65% for Ignatov. The installation was like that. And there we, he says, will watch how you vote for United Russia and for Ignatov, so you get the money for the settlement. But I was not there either. The heads speak, but no one will confirm, the deputy head added.

It was not possible to contact the head of the Itkul village council, Alexander Kulakov: he is on vacation.

It is impossible to get a comment from Svetlana Kudryavtseva, as explained by her deputy Valentin Sochivkin: next week she is on a business trip outside the Novosibirsk region.

– I don’t know, I’m not ready to say anything, since I wasn’t involved in the elections. Therefore, we will now figure out who confirmed to you in the village council and what confirmed. I haven’t heard that, ”he said briefly.

It was also not possible to get through to the PEC in the village club of Filimonovsky: no one answered the call.

The NGS correspondent sent a request to the election commission of the Novosibirsk region asking whether a check would be carried out on the fact of anomalous turnout in the elections in the village.

– If you look at the election results, most of the city districts did not benefit from United Russia – Kirovsky, Sovetsky, Pervomaisky, Tsentralny, Zaeltsovsky. Because of such tricks, due to such tricks, it turned out that the residents of Novosibirsk were, in fact, not represented in the State Duma. The cutting itself is how it works: these villages are tied to urban areas hundreds of kilometers away, why? Because it is quite obvious that if there were city districts, there would be other deputies. Therefore, at the first stage, the territory is cut, at the second – a three-day vote is invented, at the third – tough commands are given about how much interest and for whom should be given, – said the deputy Alexander Burmistrov.

According to the second author of the video, Alexei Nosov, it is planned to apply for this video to the Investigative Committee, which will list all the revealed anomalies in Filimonovsky.

The Central Election Commission of Russia noticed violations of campaigning during voting days. CEC Chairwoman Ella Pamfilova said that they will be considered after the elections are over.

What does the new UK Secretary of Defense say about Russia?