The ruble exchange rate on the end of the working week turned sharply down after updating local highs. Thus, the rates were approaching the marks of 63.66 rubles per dollar (the minimum of the current year set in March) and 71.4 rubles per euro (the lowest level since April last year). However, by the end of the week they returned to the area of ​​65 rubles and above 72 rubles, respectively. 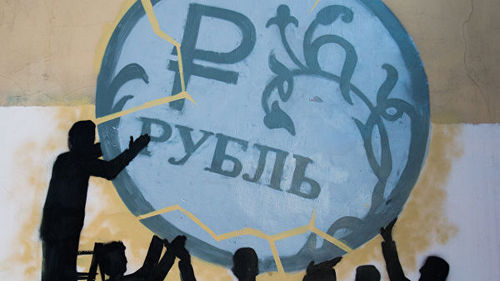 Rising oil (above $ 75 per barrel of Brent grade) to the highs since October last year faded into the background amid a decline in risk appetite among global investors. The growth of geopolitical risks against the background of the decision of the Russian authorities to simplify the procedure for issuing RF passports to citizens of the DPR and LPR added pressure on the ruble.
As a result, by Friday evening, the dollar rose by 80 kopecks to 64.85 rubles a week, the euro by 30 kopecks to 72.35 rubles. The ruble price of a barrel of Brent rose to the level of 4.65 thousand, although this week exceeded 4.85 thousand.

The ruble against the main reserve currencies at the beginning of the week continued to grow after the then uncertain attempts of correction. The growth impetus was set by a jump in the oil market by more than 2% after a long weekend in the West, formed due to the celebration of Catholic Easter.

The main factor that sharply pushed up the cost of “black gold” was the later reports of the Washington Post that Trump confirmed that the US authorities would announce the termination of sanctions exemptions for a number of countries to buy Iranian oil from May 2.

The United States last year unilaterally withdrew from a “nuclear” treaty with Iran and reintroduced sanctions against Tehran. At the same time, for a number of countries (China, India, Italy, Greece, Japan, South Korea, Taiwan and Turkey), the States established temporary exceptions, that is, pledged not to impose sanctions for purchasing certain amounts of Iranian oil until a certain time.

Preparations for the peak of the tax period of April, which fell on this week, also increased the demand for rubles and led to sales of currency in the framework of the accumulation of ruble liquidity by exporters to pay mandatory payments to the budget, traders say.

However, from the middle of the week the ruble went down as part of the correction. Correction background for the ruble created a suspension of growth in the oil market. Pressure came from another batch of statistics. Thus, the commercial oil reserves in the United States (excluding the strategic reserve) for the week ending April 19 increased by 5.5 million barrels, or 1.2%, to 460.6 million barrels, according to the weekly review of the energy information management of the country’s energy ministry. Analysts polled by Reuters, expected growth in stocks of only 1.3 million barrels, to 456.5 million.

In addition, oil production in the United States is now 12.2 million barrels per day (close to the historical maximum), an increase of 100,000 barrels per day compared with those a week earlier. Oil reserves at the country’s largest terminal in Cushing (Cushing) rose by 500,000 barrels – to 44.9 million.

Foreign stock markets also showed uncertain dynamics on Wednesday, indicating a drop in risk appetite in global markets, including in relation to ruble assets and the ruble itself.

At the same time, even the peak of the tax period of April, which fell on April 25, did not increase sales by currency exporters, which could support the ruble rate.

Pressure on Russian assets will continue to exert increased tension on the geopolitical background. Russia has simplified the procedure for obtaining Russian citizenship for people living in self-proclaimed DNR and LC, which can intensify sanctions rhetoric. In this connection, the news that on May 1 in the committees of the House of Representatives and the Senate of the United States hearings on issues related to Russia became alarming.

The ruble spent the end of the week in a continuing corrective decline, which was supported by the downward correction of the oil market. Problems with the transportation of polluted Russian oil through the Druzhba pipeline helped the black gold quotes update many-month highs, but concerns about a possible departure of OPEC + from production cuts and even increasing it pushed oil down.

Meanwhile, the Ministry of Finance of the Russian Federation last Wednesday placed OFZs of two series for 59 billion rubles (at par) with a demand of 131.2 billion rubles.
Of course, against the background of the risk appetite correction, the demand for ruble debt has somewhat weakened, but the Ministry of Finance continues to place the ruble debt, exceeding the plans for borrowing.

At the same time, there are grounds for investors to play on the OFZ quotes increase and, accordingly, the ruble exchange rate. The Central Bank of the Russian Federation concretized the signal to reduce the key rate in 2019: the regulator allows its decrease in the second and third quarters.

Meanwhile, the long May holidays in the Russian Federation and the uncertainty of the geopolitical background in the face of the completion of the tax period pack may leave the ruble under pressure for now.

About Slava Marlowe’s revelations about his hometown

6 thoughts on “The ruble bounced down from highs, again geopolitics?”